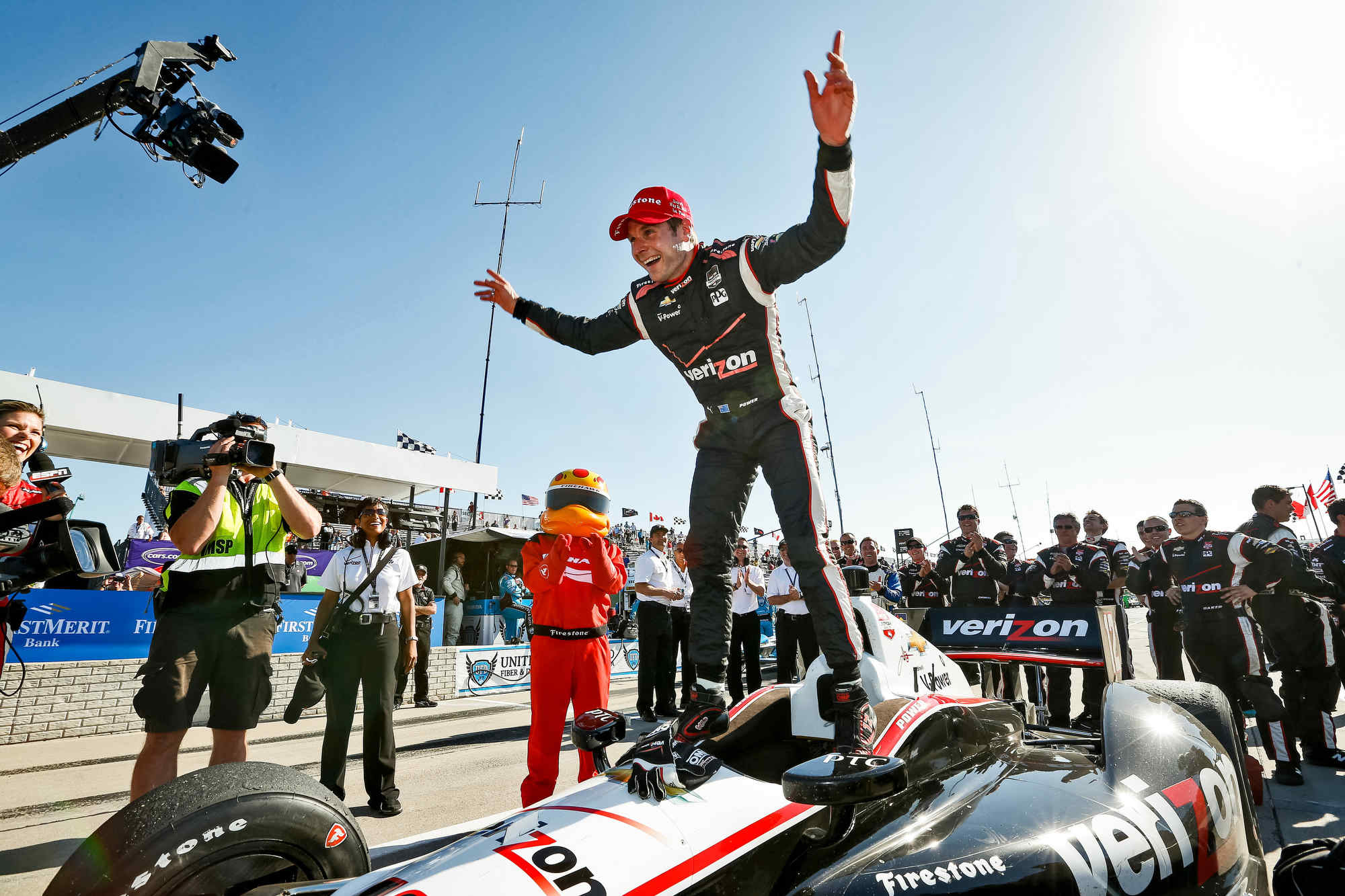 MODERATOR: We're pleased to be joined by the driver who leads the Verizon IndyCar points standings, Will Power of Team Penske. Will, welcome to the call. Will drives the No. 12 Verizon Team Penske Chevrolet and leads the series points standings by four points over his teammate Helio Castroneves heading into this weekend's ABC Supply Wisconsin 250 at Milwaukee IndyFest.

Will, you've said all year that you're not worried about points. You just want to win races. There are three races remaining in the season. Is it time to start thinking about points?

WILL POWER: It's probably time to start thinking about winning. At the end of the day, if you win two of the last three races or we win all three, obviously, we'll win the championship. But it always depends on your situation at the time. You know where you qualify, how you're running at certain times of the race, you know. It's really how you drive and what chances you may take. So you just got to adapt to those situations throughout the weekends that you're competing, and that's how you're going to get the best results.

MOEDRATOR: You said before that Milwaukee has become one of your favorite, if not your favorite oval on the schedule. What is it about Milwaukee that makes you like it so much?

WILL POWER: It's the only flat oval that we race with pretty much no banking. It creates a situation where the car setâ€'ups really matter. So you see a lot of people strong at the beginning and seeing them struggle at the end and vice versa, which creates good racing in the end. Then sometimes you're off-strategy and you're on new tires and people aren't, so it makes it a fun race from that point of view.

It's just another unique part of the IndyCar Series where you're racing on something different from everything else in the series. I enjoy it. I mean, pretty much enjoyed all the ovals this year. It's been a lot of fun.

Q. Looking past this weekend into the next two races this season, the season ends at two places where you've had some highs and also some lows in Sonoma and Fontana. Do you see ending the season at those two tracks as being an advantage to you as you've won races at both places?

WILL POWER: I think the way the series is now I'm not sure anyone has an advantage anywhere. It seems to change every year. But in particular definitely Sonoma is a track that I really enjoy. It's very technical, and I definitely look forward to racing there. Fontana last year was one of the highlights of my whole career, I feel. Man, I just had so much fun and just enjoyed winning that race more than pretty much more than any race I've ever won. So it's definitely two good tracks with great memories for me.

Q. I know you've been in this position a couple times before leading the series with three points to go and ending up finishing second. Is there anything you can learn from 2010 or 2012 that you can bring here or is it just all about focusing one race at a time type deal?

WILL POWER: Obviously it is truly about focusing at one race at a time, almost one lap at a time, one session at a time type thing trying to get the most out of it. You're constantly learning every year. I think that's why some of those older drivers are doing so well just because of the amount of knowledge that they have about understanding how to deal with certain situations and always putting themselves in good position. So experience counts. I feel like now this is the first year I've gone through the season to now feeling like, yeah, of all the tracks we're going to, there is no weakness there. So I definitely feel confident.

Q. Will, does a fourâ€'point lead give you any room to be confident at this point?

WILL POWER: No, I'm not considering the amount of points that are on the table. Maybe those four points will count in the end, but it's a full season of racing and points. And the guy that scores the most at the end just kind of ebbs and flows as far as who is leading at the time. But in particular, it's definitely a pretty tight year with three races to go, or as you said, really four races worth of points to go. So, it's still in a funny way it's still kind of early considering how many points are on the table.

Q. As far as the season winding down kind of thing for your team and for you, it's been a long season. It looks like there is going to be an end to it no matter who wins. Do you look with your team, is there any fatigue there at all? Is it maybe some kind of relief that this is just about done?

WILL POWER: It actually feels like a very short season. I can't believe we've only got three weeks left and we're done. But, yeah, it's been kind of cool. It's been backâ€'toâ€'back, and I've actually liked it. Just keeping busy. We have the weekend off and you feel like it's forever between races. So I think that's actually a pretty good thing about the schedule is just constantly we're always somewhere racing, and I think that's good for the fans. It keeps the continuity going.

Q. Will, we know how aggressively you and Helio have raced on the track this year. I'm wondering where are you guys right now off the track as far as your relationship and how you're preparing for this?

WILL POWER: Just normal as it's been for the last four or five years. It's funny that we're falling into the championship and we don't really talk about it very much at all.

Q. You don't even talk about it among each other or between each other rather?

WILL POWER: No, we don't really talk about the points situation. No, not really.

Q. How much emphasis have you put into oval racing this season as opposed to the past?

WILL POWER: Actually, it's been a process over the last four years for me. Certainly, I guess, I kind of worked pretty hard at it, and now it's one of my strong points is racing on ovals. You're always able to run at the front, be competitive and have a shot at the win. There probably hasn't been more emphasis on it this year. It's just been a process of learning over the past four years.

Q. You've driven the Verizon Penske car for a few years, but this is the first year Verizon has been the series title sponsor. How great has the support been for Verizon including using their technology?

WILL POWER: It's obviously a great thing for the series to have Verizon as a sponsor, and they're in the technology business. You know, just some of the things they've brought into the series, like the INDYCAR 14 app which gives you the onâ€'board cameras, live inâ€'car camera views and live track maps, live driver pit crew audio, live race radio broadcast, and there is a lot of other stuff like the fan village and so on that they display the latest technologies that they've come up with and the newest Smartphones and tablets and so on and a lot of other stuff as well. For me they've been a fantastic supporter of mine from the very beginning starting with Penske and a great partner for Penske as well, and now a great partner for the series. I don't think there is anyone that isn't happy with the situation we have right now.

Q. You've been a driver that's been known to get out of his car and show displeasure and hand gestures to someone that you feel wronged you on occasion. Given what happened to you in New York on Saturday night, do you think IndyCar should look at prohibiting drivers from getting out unless there is a safety emergency?

WILL POWER: Actually, I don't think I have ever flipped off drivers. The only instance that ever happened was I flipped off race control. But that definitely is something that can be dangerous jumping out of your car when cars are still driving around. Obviously, when you have a crash, you want to get out as quick as possible just for the fact that there is always a chance of fire. But for sure it's something that's probably already been looked at from IndyCar's perspective and understanding how quickly someone can get out of the car and so on. So I think they're kind of on top of that anyway.

Q. I was referencing the glove-tossing at Sebastien (Bourdais) a few years ago, but I appreciate it.

WILL POWER: Glove-tossing was more like glove dropping. I didn't do anything wrong.

MODERATOR: Thank you, Will, for your time today, and wish you the best of luck this weekend at Milwaukee.