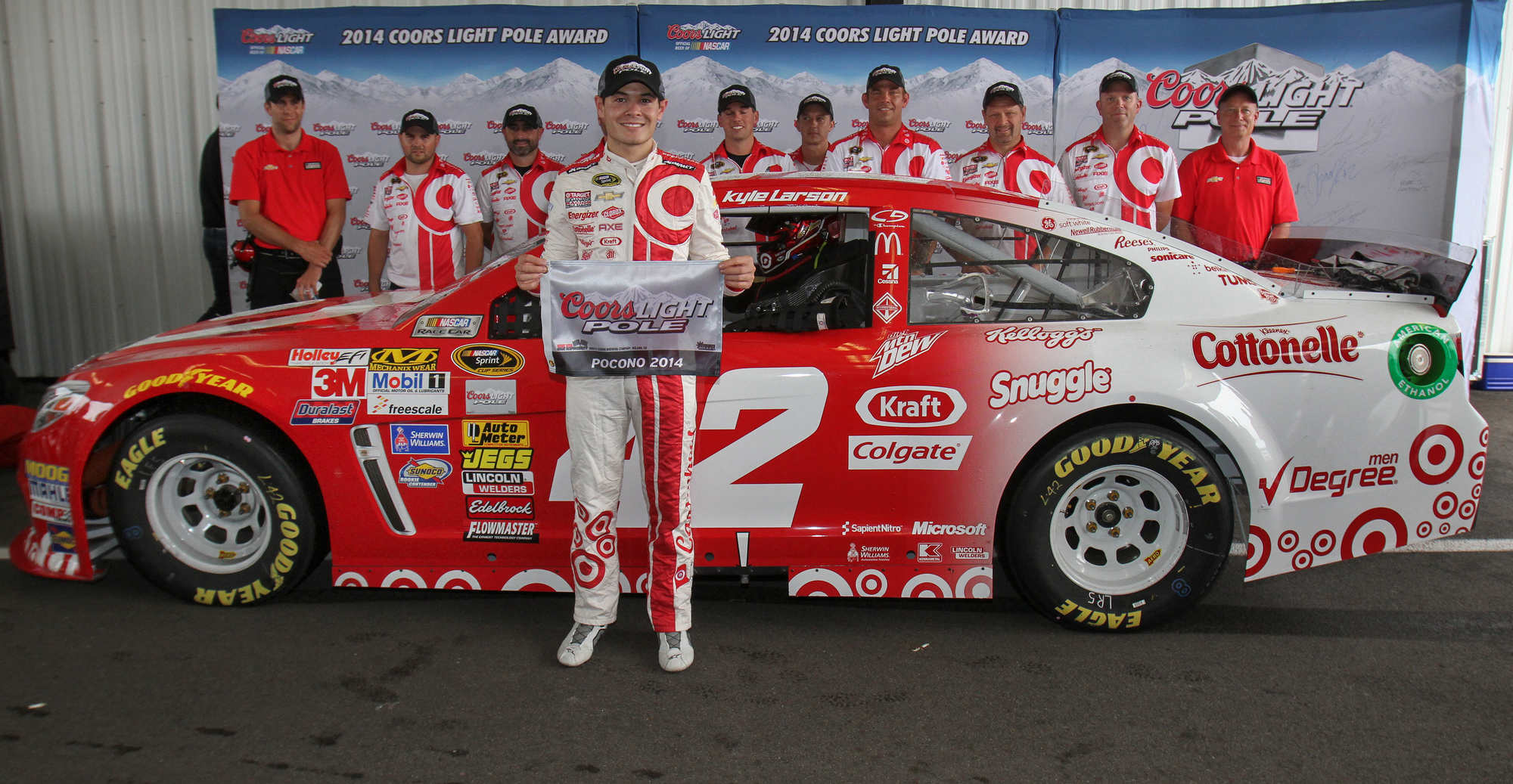 Kyle Larson captured his first NASCAR Sprint Cup career pole position with a track record lap of 183.438-mph/49.063 seconds in his No. 42 Target Chevrolet SS for Sunday's GoBowling.com 400 at Pocono raceway. The Rookie-of-the-Year contender bested the previous record of 181.415 mph/49.610 seconds around the 2.5-mile track set by Denny Hamlin in June 2014.

"I had some butterflies before that last round," said Larson, who is the first NASCAR Drive for Diversity graduate to win a NASCAR Sprint Cup Series pole. "I knew we had a shot at the pole and I was nervous. I hit all three corners about as good as I could."

Rounding out the top five were Kurt Busch, a two-time winner at Pocono who qualified fourth in his No. 41 Haas Automation Chevrolet SS, and Jeff Gordon, who won the Brickyard 400 at Indianapolis last week and has also scored six victories at Pocono, qualified his No. 24 Axalta Chevy SS in the fifth position.

Austin Dillon, also a Rookie-of-the-Year contender, qualified 11th in his No. 3 American Ethanol Chevy SS; and Kasey Kahne, with two wins to his credit at Pocono, was 12th quick in his No. 5 Farmers Insurance Chevy SS.

Jimmie Johnson, who has three career wins at Pocono Raceway, qualified 17th in his No. 48 Lowe's Chevrolet SS.

The GoBowling.com 400 is scheduled to take the green flag on Sunday August 3rd at 1:00 p.m. ET. Live coverage will be available on ESPN, MRN, Sirius NASCAR Radio Channel 90 and NASCAR.com.

IT HAS TO BE EXCITING TO WIN YOUR FIRST CAREER POLE, AS A ROOKIE ESPECIALLY AND ALSO YOUR OUTLOOK NOW FOR SUNDAY'S RACE:
"It's great to get my first ‘real' pole. I got the pole at Richmond, but that was due to qualifying raining out and we were quickest in practice. This time we got to beat the rain by a little bit and actually got to earn the pole. It was exciting last round for us. I had some butterflies actually going into it. I really haven't had any butterflies at all this season during qualifying. I don't know if I knew I was going to get the pole if I didn't mess up or what. I was definitely nervous. I felt like I hit all three corners about as good as I could. I barely edged out Joey (Logano) which feels great. He has been fast in qualifying. Him and Brad (Keselowski) both and they were right there behind me. It just feels really good and definitely adds to the confidence for Sunday. We did some race runs today in our Target Chevy and thought they were okay. I felt like we were about a 10th place car in practice. Struggled with being tight into turn one. Even in our mock run a little bit we were. Then when I went out for qualifying I didn't have any of those issues so I think we will be a lot better now in race trim too. Happy about that. Hopefully turn one this weekend goes better than it did at Richmond."

HAVING RAN WELL HERE YOUR FIRST TIME AROUND COMING HOME WITH A FIFTH PLACE FINISH, NOW YOU HAVE ANOTHER FAST CAR. HOW DO YOU FEEL GOING INTO SUNDAY WITH THIS CAR?
"I think with the strong runs I had here last time in the ARCA series and then finishing fifth in the Cup Series and we have a really fast Truck too this weekend. I think all those help the confidence for sure. For whatever reason I feel like I've adapted pretty well to this track, even though it's not a track where you maneuver around and can move from the bottom to the top. Maybe because it's a technical track in the sense that you do have to – I know I'm not good at shifting – but you have to shift and all that. It makes it technical so it seems like I have liked tough race tracks and this is definitely one of them."

AFTER A ROUGH START TO THE YEAR YOU HAVE NINE TOP 10'S THROUGH 20 RACES WHAT IS THE BIGGEST DIFFERENCE BEEN FOR YOUR TEAM THIS YEAR?
"I don't think we had a rough start at all unless a rough first race. After that we were really good. Then we had some bad luck a few weeks ago for actually a few weeks. Now it seems like we have been back on track running in the top 10 and stuff. Hopefully all that bad luck is out of the way and we can contend for some wins here and maybe get a win before the Chase would be great."

BOBBY UNSER NAMED YOU AS SOMEONE TO CONTEND WITH. WHAT DOES IT FEEL LIKE TO HEAR THAT FROM A RACING LEGEND LIKE THAT?
"That is really awesome. I knew Bobby (Unser) was a big fan of mine. He goes to the Chili Bowl every year. He will sit down and talk to us. He's got a great sense of humor and great personality too. He's a legend himself so to have him talk about me like that is really good. A lot of the people we all look up to say great things about me, which helps me out and helps my career. It means a lot. That is really cool."

THE LAST COUPLE OF WEEKS YOU HAVE HAD GOOD SUCCESS ANYTHING SPECIFIC YOU FEEL IS CLICKING RIGHT NOW THAT YOU THINK IS THERE TO STAY? ALSO HOW DID YOU CELEBRATE YOUR BIRTHDAY?
"I don't think anything has really changed over the last couple of weeks. I may have run better except for just the bad luck. Sonoma we were running in the top five really the whole race and had power steering issues and then Kentucky we were fast and blew a right-front (tire). Daytona is just Daytona. We have been really fast I think the last few months. Just maybe finding better luck now.

"As far as my birthday we flew here. Actually it was my manager's six year old daughter's birthday yesterday also. We had a little birthday lunch at the office there. She's actually mad at me right now because I got my real girlfriend pregnant and she thought she was my girlfriend (laughs). That was fun. I got here a dozen roses and messed with her. I got her a ring pop and she didn't really like that. So messed with her a lot, then flew here and watched the 360 Nationals from Knoxville on my computer."

THE LAST TIME YOU WERE HERE YOU WERE TALKING ABOUT THE TEAM HAVING YOU DRIVE A PERSONAL CAR TO GET USED TO SHIFTING ARE YOU STILL DOING THAT?
"I'm not driving the Camaro anymore. I guess we did. We had our sponsor summit last week at Indy and we were driving Camaros around with sponsors and stuff. I guess that was a little bit more shifting. I've been doing better lately. Last time we were here at Pocono I missed I think two shifts all weekend then Sonoma I didn't miss any. I hope whatever has clicked in my brain is helping me, but I don't want to jinx it."

DO YOU FEEL ANY PRESSURE TO GET THAT WIN SO YOU COULD LOCK YOURSELF INTO THE CHASE?
"Yeah, there is definitely a little bit more pressure. Each week that we get closer to the Chase when you don't have a win – I think I'm the 15th seed (currently). It's all close in points. It would be nice to get a win and relax a little bit. I think we have been close, really close and our car showed a lot of speed pretty much all season long. We just have to find a little bit more. I feel like we have a really fast car for this weekend. Hopefully we can get it done."

WITH RUNNING THE TRUCK RACE WHAT MORE DO YOU WANT TO GET OUT OF THOSE 60 LAPS? NEXT WEEK AT WATKINS GLEN ARE YOU GOING TO RUN THE K&N RACE TO GET A LITTLE BIT MORE TRACK TIME THERE?
"No K&N race. This track is really tricky. Obviously, it's the ‘tricky triangle.' I think the Truck is a lot slower, similar to the ARCA car so it helps you kind of look at the race track and see marks on it that help you and help your rhythm. It's a short race tomorrow, but I think we have a really good truck for that. Hopefully I can learn even more, which will help me for Sunday. It would be nice to run the K&N race at Watkins Glen next week, but didn't really think about that until you mentioned it. But I will run the Nationwide race so that will help a lot too for the Cup race."

HOW REALISTIC DO YOU SEE THE WIN COMING WITHIN THESE NEXT COUPLE OF WEEKS?
"I definitely think it's realistic to think that we could win. I think Pocono is a good track for me. Michigan is a good track for me and then we get to go to Atlanta where I have never raced a Cup car before, but it's a rough worn out surface. You can move around. I think that track will be great for me too. I don't have the greatest stats at Richmond, but I feel like we had a good test there a few weeks ago that will be good for when we go back. There is a small string in the schedule where there are a lot of race tracks I didn't like, but now we are out of those so I think that helps the confidence and hopefully we can get a win."