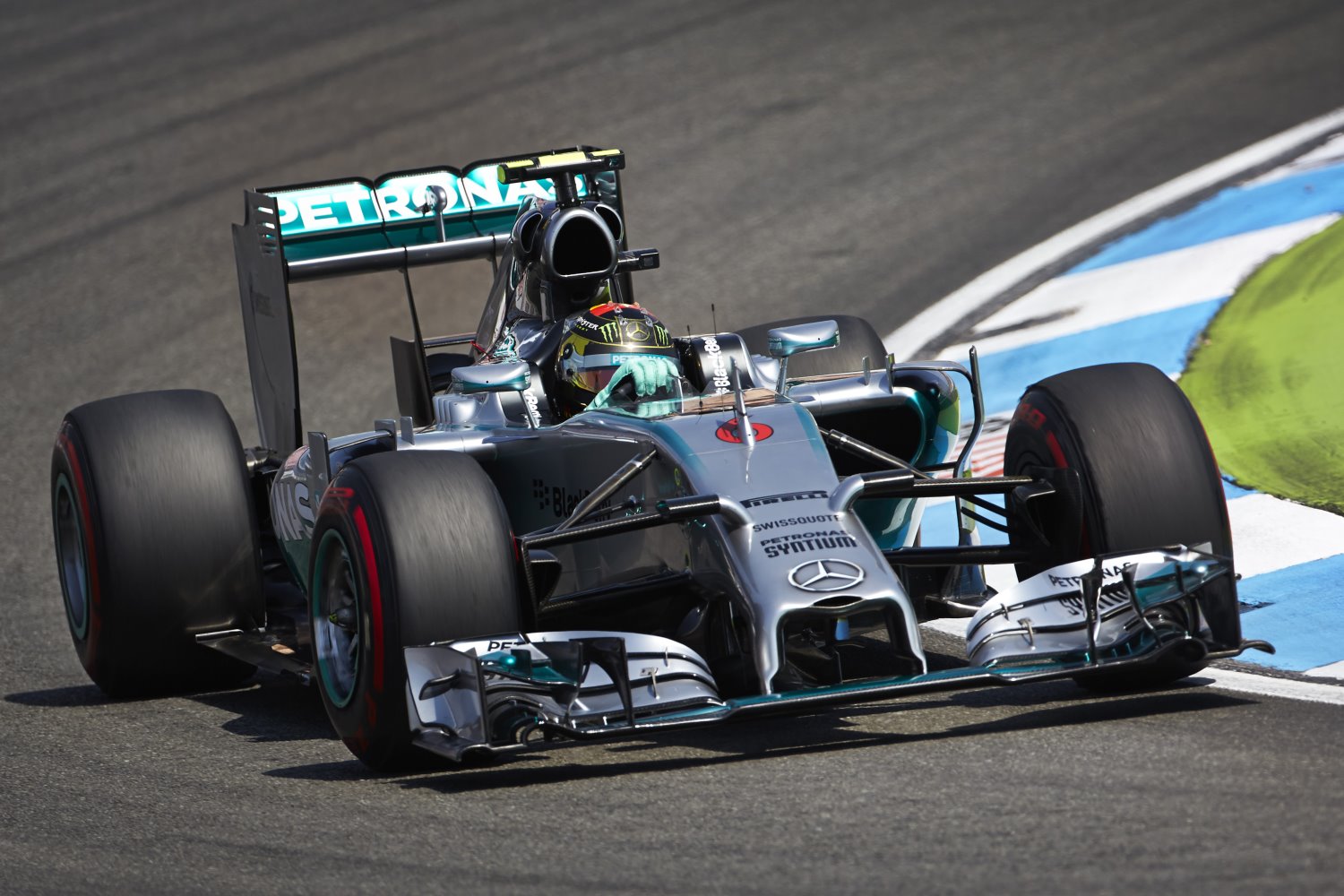 Mercedes driver Nico Rosberg won the German GP F1 race Sunday in an easy waltz as Mercedes powered cars finished 1-2-3. Lewis Hamilton came back from a 20th starting spot and bullied his way to the front in the 2nd Mercedes, breaking wings and bodywork of everyone he came in contact with – his signature driving style, to finish third.

Valtteri Bottas was second for Williams holding off Hamilton to the flag.

The race was a parade for Vettel. "Do you want me to pass or do you want me to save fuel," asked Sebastian Vettel to his Red Bull crew Sunday at Hockenheim. "You need to save more fuel," came the answer, proving in F1 you don't race today, you parade around minding your fuel consumption.

The start of the race was exciting as the Williams of Felipe Massa flipped over.

Massa was flicked upside down after clashing with Magnussen's McLaren as they battled for position at the first corner.

Although the race stewards decided that neither driver had done anything wrong, Massa had no doubt that Magnussen could have avoided the crash.

"I was in front, I was doing the corner in front of him," said Massa. "If anyone needs to watch, it is the car behind.

"I didn't see yet the accident [on television], but normally the car behind has to brake.

"At that the corner you cannot have three cars side-by-side, and I backed off a bit to not be side-by-side with my teammate.

"It is normally a guy who comes from GP2 who causes this accident…."

Nico Rosberg
Wow, what a great day after so many great events for me this week! I came here hoping for a win and it worked out perfectly. My Silver Arrow was so dominant, thanks to the team for this fantastic car. Before the race I was worried that without the FRIC system the gap in the race would be smaller. But we were again the quickest out there. I did a two stop strategy, which was difficult to manage at the end of the stints as the tires were almost gone. I'm so happy for Mercedes; it was the first win for many many years in Germany. Thanks for the support here at Hockenheim, the fans were amazing to me. Also at the start I saw a Mexican wave, which was great. Now I look forward to Hungary.

Lewis Hamilton
First of all, congratulations to Nico on winning his home race; it's a special feeling and I am very proud that we could put both cars on the podium for Mercedes-Benz in Germany and represent for all the Mercedes employees and fans here this weekend. From a personal point of view, I can't be too ecstatic about the race because it has been a tough weekend for me and I've ultimately lost more points to Nico in the championship battle. But I'm grateful that I could limit the damage with a podium finish. When you are sitting on the grid basically in last place, with no other cars in your mirrors, it's very hard to imagine that you could be standing up there two hours later. I'm so grateful to the team for this car, I really take my hat off to them for building a machine that can put in that kind of performance. To be honest, it was a pretty straightforward race for me, although I had some trouble following what was going on and where I was running at times. I had a nice battle with Kimi early on, when I was lucky not to damage the front wing, then the incident with Jenson was just unfortunate. He has been such a gentleman this year and not given me too much trouble getting past but it was just a misunderstanding today. I wasn't close enough to try and pass but I was on the inside line in the corner. It looked like he had gone wide, then he cut back across the corner and perhaps he didn't see me there. I lost quite a bit of downforce with the damage and it made it very hard to look after the front left tire. I had a lot of understeer and the tire was degrading fast, which is the reason why we converted from a two-stop strategy to three. Then the team called me in early on the first set of option tires because we expected a Safety Car to come out – and I was surprised that there wasn't one, to be honest I caught Valtteri pretty fast in the final laps but he just had too much straight-line speed to get past. I'm doing absolutely everything I can to get back on level terms with Nico in the title battle: I can't focus more or work harder than I am doing right now. This championship is proving a big challenge for me but that's how I love it – and I wouldn't have it any other way.