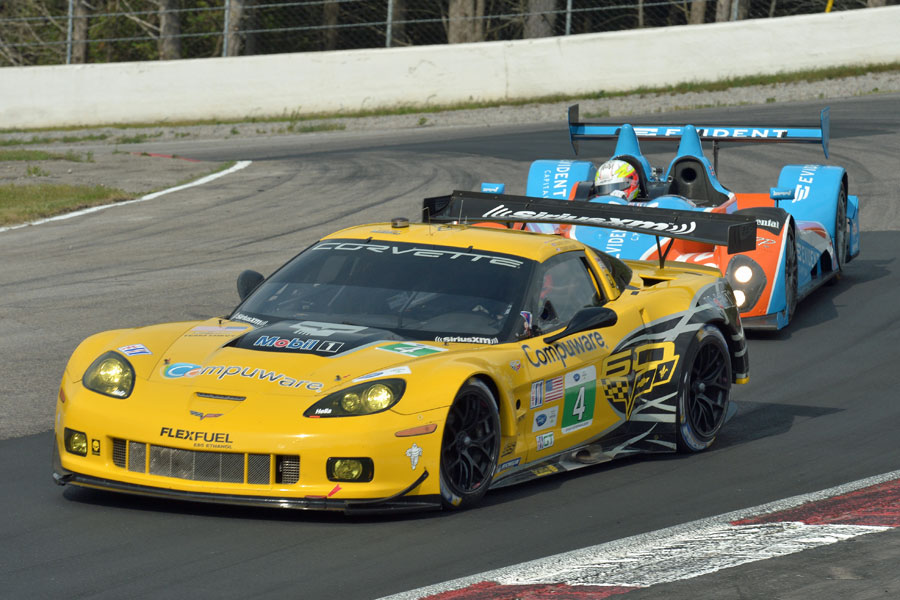 The TUDOR United SportsCar Championship records another milestone this weekend as the unified series competes in Canada for the first time.

The second half of the TUDOR Championship begins with the Mobil 1 SportsCar Grand Prix presented by Hawk Performance at Canadian Tire Motorsport Park in Bowmanville, Ontario.

All three classes feature intense competition for the respective championships.

Townsend Bell and Bill Sweedler, drivers of the No. 555 AIM Autosport Ferrari 458 Italia, lead GTD by seven points over Andy Lally and John Potter in the No. 44 Magnus Racing/Flex-Box Porsche 911 GT America, 145-138.

The race will be televised live on FOX Sports 1 beginning at 2 p.m. ET.

The recent race at Watkins Glen International was the first visit for former American Le Mans Series presented by Tequila Patron competitors to the circuit that hosted the former Rolex Sports Car Series since 1999.

It will be a reversal of roles this weekend at Canadian Tire Motorsport Park, a circuit that showcased the ALMS annually since 2000. It will be the first race at the challenging venue for all Daytona Prototype teams, including Action Express Racing, Chip Ganassi Racing with Felix Sabates, Wayne Taylor Racing, Michael Shank Racing with Curb/Agajanian, Marsh Racing and Spirit of Daytona.

From the LM P2 side, OAK Racing will be making its first visit to CTMP.

One team with plenty of experience is Extreme Speed Motorsports. Last year, ESM finished second and fourth in the ALMS P2 class. Lead driver Scott Sharp joined Johannes van Overbeek in winning the GT class in an ESM Ferrari F458 Italia in 2012. The former ALMS GT category returns virtually unchanged as GTLM. While many of the former ALMS GTC-class teams included in the GT Daytona (GTD) class have raced at CTMP, they will be racing a new Porsche 911 GT America at the track this season.

A warm day at the race track can mean sizzling temperatures inside a closed-cockpit race car.

Competitors in the GT Le Mans (GTLM) class will be keeping their cool this weekend at Canadian Tire Motorsport Park and all other events on the TUDOR United SportsCar Championship due to a mandatory air conditioning system required for all cars in the class.

Using FIA regulations for the class, closed-cockpit cars must maintain a maximum temperature of 32 degrees Celsius/89.6 degrees Fahrenheit (or equal to the ambient temperature if it is higher than that), and be able to attain that target within eight minutes after a pit stop.

"Keeping cool" is more than a matter of personal comfort.

"At the end of a race, if it's cooking hot, it's always good to keep a cool head and stay 100-percent concentrated," said Dominik Farnbacher, driver of the No. 91 SRT Motorsports Dodge Viper SRT GTS-R. "The AC is very comfortable and keeps you cool, but the most important thing is it keeps your mind clear."

Kuno Wittmer, driver of the team's No. 93 Viper, agrees with his teammate.

"The fan pushes the air to the driver through the vents in the factory-shaped dash, which is actually carbon fiber," said Steve Floyd, car chief for the No. 91 Viper. "It blows cold air at their face, feet, and their torso, while a tube hooks up to their helmet. There's also an air conditioning tube that comes down and cools some of the components in the car."

While AC is mandatory in the GTLM class, it is optional in the GT Daytona (GTD) category. Riley Motorsports has an air conditioning system similar to the GTLM setup in the team's No. 33 Dodge Viper SRT GT3-R that races in the GTD class, for similar reasons that the team uses for its GTLM cars.

The lone Canada-based team in the TUDOR United SportsCar Championship is also leading its class in the battle for the GT Daytona (GTD) title.

AIM Autosport of Toronto enters the race with a seven-point lead over Magnus Racing in the standings (145-138).

Drivers Townsend Bell and Bill Sweedler were part of the winning lineup in the No. 555 Ferrari 458 Italia in the season-opening Rolex 24 At Daytona. Since then, they've finished second in the REVO/Robert Graham/Royal Purple/Motegi Ferrari at both the Mobil 1 Twelve Hours of Sebring and Sahlen's Six Hours of The Glen.

The strong showing in the endurance classic also gives AIM Autosport a healthy 37-23 lead in the GTD class in the Tequila Patron North American Endurance Cup. Scoring minimum points in the season-ending Petit Le Mans powered by Mazda at Road Atlanta on Saturday, Oct. 4 will wrap up that title.

Three Canadian drivers are in the field for the Mobil 1 SportsCar Grand Prix presented by Hawk Performance:

Sylvain Tremblay, who co-drives the No. 70 SpeedSource Mazda with Tom Long, is a native of Montreal and a former CTMP winner in the Continental Tire SportsCar Challenge.

Michael Valiante of Burnaby, British Columbia, drives the No. 90 Spirit of Daytona Corvette DP and is coming off a victory with Richard Westbrook in the Sahlen's Six Hours of The Glen.

Scott Sharp is a six-time winner at CTMP. He joined Johannes van Overbeek in winning the GT class in an ESM Ferrari F458 Italia in 2012. Sharp won overall in 2009, driving an Acura ARX-02a in the P1 class, and took P2 honors in 2008 in an Acura ARX-01b. He also won three Trans-Am races.

Corvette Racing is on a roll in the GT Le Mans (GTLM) class of the TUDOR Championship, with Antonio Garcia and Jan Magnussen winning the last three races at Long Beach, Mazda Raceway Laguna Seca and Watkins Glen International in the No. 3 Chevrolet Corvette C7.R.

In the process, the pair have opened up a nine-point lead in the GTLM point standings, leading BMW Team RLL teammates Andy Priaulx and Bill Auberlen, 154-145.

"I have to say I am so pleased for how things have gone for the team this year, with the No. 3 car especially, but how we have developed a new car and we keep finding better things to do with it," Magnussen said. "We are finding better race speed over one lap over the whole distance and making the Michelin tires last for the whole stint. We have a fantastic race car. It's a very competitive category and you have to be on your game with everything you do. There is no room for any mistakes – otherwise you lose it."

This weekend, Corvette Racing returns to Canadian Tire Motorsport Park – where it has enjoyed great success since 2001.

Over the past 13 years, Corvette Racing has won the lead GT class at CTMP 10 times. Oliver Gavin and Tommy Milner won last year's race in the No. 4 entry, which was a Corvette C6.R. Gavin is a four-time winner at CTMP, while Magnussen has also won GT four times – most recently with Gavin in 2011 (Magnussen also won the Prototype class in the inaugural 1999 event co-driving with Johnny O'Connell in a Panoz LMP1 Roadster S).

The last make other than Corvette to win back-to-back GT races at CTMP was Dodge Viper, with the French ORECA team winning in 1999 (Beretta and David Donohue) and 2000 (Beretta and Karl Wendlinger.)

Like The Glen, the circuit was built in the late 1950s, with its first major race the Player's 200 in 1961, won by the legendary Stirling Moss. The winner suggested a change to the circuit to make it more challenging, and the resulting Moss Corner was named in his honor.

Originally known as Mosport Park, the basic layout has remained unchanged since that first race event. The 2.459-mile track was designed to have 10 turns, a long back straight and pits for 30 cars. Many improvements, some major, have been made to keep the track current and safe.

The venue hosted the Canadian Grand Prix on eight occasions from 1967 through 1977. Jackie Stewart was the lone two-time winner (1971-72), while Jack Brabham, Jacky Ickx, Peter Revson and Emerson Fittipaldi among the winners. James Hunt won en route to the 1976 world title that was documented in the recent movie Rush, while Jody Scheckter won the final race in 1977 in a car owned by Canadian Walter Wolf.

Panoz Motorsports purchased the track in 1998 and began a series of improvements. Canadian Motorsport Ventures (CMV), a group comprised of Carlo Fidani, Al Boughton and Ron Fellows, purchased the facility from the Panoz Motorsports Group in 2011, with additions including a two-way tunnel, new main entrance and improved spectator areas.

GS, ST Titles Up For Grabs Entering Second Half Of Season

Both the Grand Sport (GS) and Street Tuner (ST) titles are up for grabs as the Continental Tire SportsCar Challenge enters its second half of the season on Saturday at Canadian Tire Motorsport Park.

In GS, Trent Hindman is tied for the lead with Matt Plumb with 154 points. Hindman and John Edwards held a formidable 25-point lead entering the fourth race at Kansas in the No. 46 Fall-Line Motorsports BMW M3, but have struggled in the last two events. Meanwhile Plumb won at Lime Rock, took fourth at Kansas and third at Watkins Glen as he looks to give the No. 13 Rum Bum Racing Porsche 911 co-driven by Nick Longhi its third straight team title.

No. 07 TRG-AMR Aston Martin Vantage driver and Kansas winner Kris Wilson is third with 151 points, followed by Edwards with 139. Andrew Davis and Robin Liddell – who won at Watkins Glen International in the No. 6 Stevenson Auto Group Chevrolet Camaro Z/28.R – are next with 138 points.

The ST battle also is a toss-up as the season enters its second half. Tyler Cooke and Greg Liefooghe placed 12th at The Glen in the No. 81 BimmerWorld BMW 328i to have their lead cut to only two points over Daytona winner Eric Foss (146-144), driver of the No. 56 Murillo Racing/Mosing Motorcars BMW 328i. Another point back is Wayne Nonnamaker, coming off back-to-back runner-up results for Team Sahlen in the No. 42 Porsche Cayman.

This will be the seventh race for the series at CTMP, which last raced there in 2008.

Four Toronto-area teams will be looking for a home-course advantage on Saturday at Canadian Tire Motorsport Park: Multimatic Motorsports, Compass360 Racing, CKS Autosport and Mantella Autosport are all based near the historic circuit.

Toronto driver Scott Maxwell is part of the two-car Multimatic Motorsports lineup. Maxwell is a two-time winner at the circuit, co-driving with Joe Foster with Hyper Sport in 2007 and 2008.

Compass360 Racing will have four entries, a Subaru SRX-STI in GS and a trio of Honda Civics in ST. Brothers Tom and Gary Kwok of Markham share the No. 73 M&S Produce/HPD Honda Civic Si, while James Vance of Stouffville drives the No. 74 Loud Basstard/Be the Match/Expo Systems Honda Civic Si. The team also includes the No. 75 for Kyle Gimple and Ryan Eversley, coming off a win in the Continental Tire 150 at Watkins Glen International.

CKS Autosport has been running strong in GS with a pair of Chevrolet Camaro Z/28.Rs, including the No. 00 co-driven by Ashley McCalmont of Ancaster.

Mantella Autosport is in its first year of Continental Tire Challenge competition, with the No. 8 Aston Martin Vantage driven by Anthony Mantella of Toronto and Mark Wilkins of Palgrave.