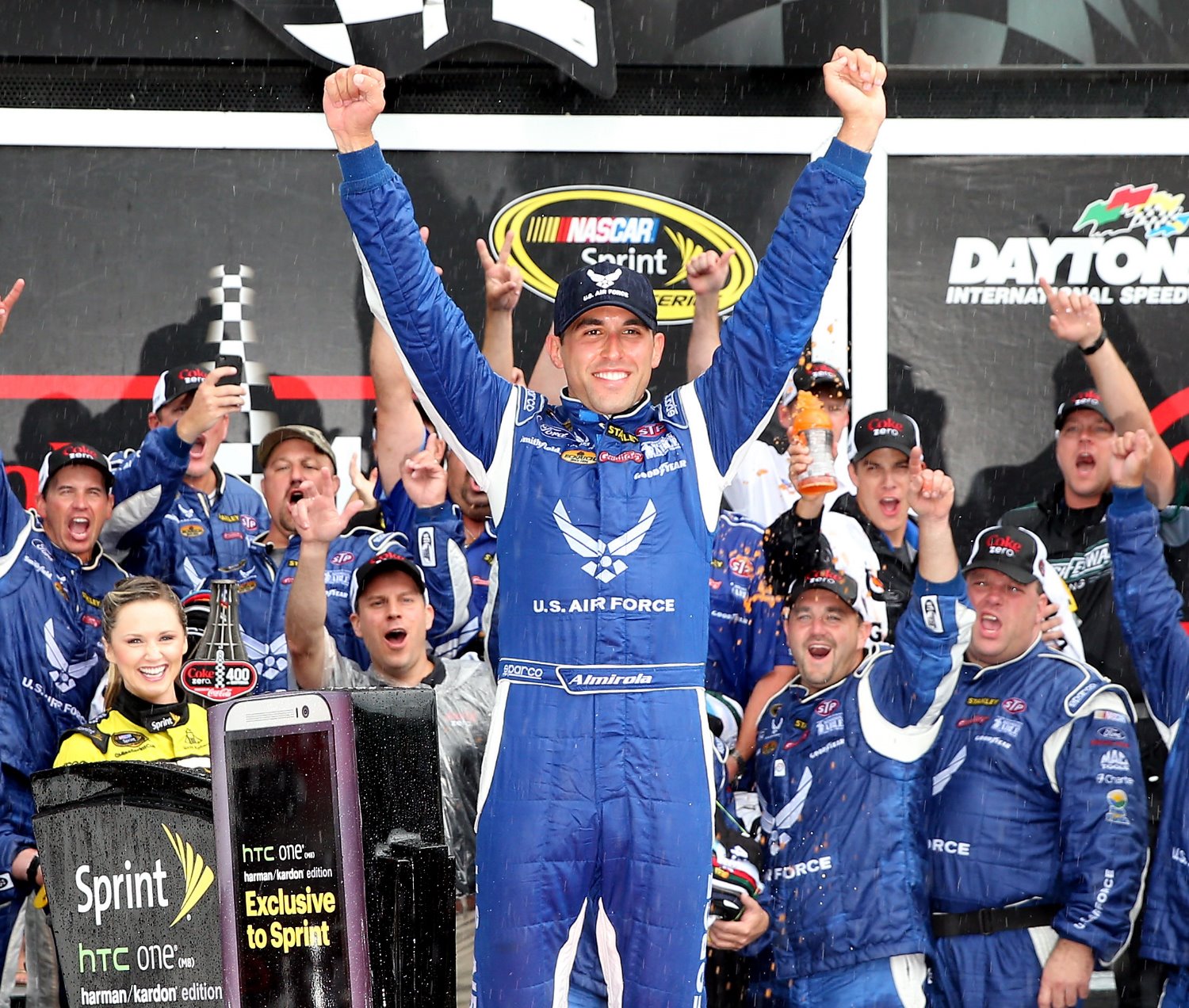 Almirola survived two rain delays and two wild multi-car wrecks and put himself in the perfect place at the right time, with his no. 43 Air Force-sponsored Ford leading a whittled-down field of just 18 cars when the skies opened up on lap 112 of the scheduled 160-lap distance.

NASCAR officials had hoped to dry the track and resume racing, but after nearly an hour under the red flag, officials finally let Mother Nature win and declared the race official, earning Almirola his first win in his 124th Cup Series start and giving the Petty-owned team their first win since John Andretti took the checkered flag at Martinsville in April of 1999.

Almirola’s win was the third-straight for Ford and also secured his team a spot in the Chase for the Sprint field with just eight races left in NASCAR’s “regular season".

"I can't believe I just took the 43 car to victory lane here at Daytona. This is amazing," said Almirola. "I grew up two hours away from here in Tampa and I grew up in those stands watching Daytona 500s and Firecracker 400s and grew up dreaming about what it would be like to win here.

"Not only have I done that, I've went to victory lane, and all the history behind the car and the race car and stuff, you know, I'm very appreciative of that and very cool — I think it's very cool that we won on this weekend. It's 30 years to the weekend that The King won his 200th race with the President here. That's really special."

It was on July 4, 1984 at Daytona that Richard Petty collected his 200th-career victory in the first NASCAR race attended by a sitting President, as then-President Ronald Reagan was on hand to greet Petty following the race and take part in a post-race barbeque hosted in the infield garage.

The iconic image of Reagan standing shoulder to shoulder with Petty and later enjoying some fried chicken with some of the stars of auto racing helped push NASCAR into the mainstream, and is considered one of the pivotal moments in the history of the sport.

Although the 43 was back in Victory Lane on Sunday, Petty himself wasn’t there – he was at home in North Carolina, watching the race on television.

"I'm sitting here reading the funny papers," Petty said via telephone. "I just feel so good for the crew. We've had so many disappointments, and finally it rained on us, but it rained on us at the right time.

"30 years ago was history. Today is the future. To be able to win the race down there, win it for the Air Force, 4th of July, you know, the whole thing is just great."

Calling the race official was almost a mercy killing for an event that had been plagued by persistent rain showers since the cars first took to the track for practice last Thursday, with rain showers pushing the traditional Saturday night event back to Sunday.

The race began with ominous skies in the distance and it wasn’t long before things got ugly, starting with a 16-car crash on lap 20 that involved series points leader Jeff Gordon, defending race winner Jimmie Johnson, and Daytona 500 winner Dale Earnhardt, Jr.

While the cleanup for the first incident began, rain started to fall again, bringing out a 25-minute red flag.

Once back underway, the race settled into a typical restrictor-plate affair, with 21 lead changes over the course of the event, but with many of the front-runners out of the race, it seemed the perfect opportunity for someone outside the top-20 to move up to score a decent finish. Just the opportunity Almirola was looking for.

Coming into Sunday’s race 23rd in points and on the outside looking in as far as a spot in the Chase was concerned, Almirola managed to put his no. 43 Ford out in front of Kurt Busch and was leading on lap 97 when the “Big One" reared its ugly head again.

Running back in the fourth spot, Kasey Kahne got turned and collected fifth-place Joey Logano, touching off a 26-car pileup that involved nearly every car from fourth-place on back with only the top three cars of Almirola, Kurt Busch and Mears escaping unscathed. Among the other drivers caught up in the wreck were Jamie McMurray, Clint Bowyer and Kyle Busch, whose no.18 Toyota Camry wound up on its roof.

After another red flag to clean up the mess, Almirola was back out in front as racing resumed with 55 laps to go, but just five laps later the rain returned, forcing NASCAR to throw another red flag.

After nearly an hour under the red flag, the rain got heavier and NASCAR finally threw in the towel.

Vickers second-place finish was his best so far this season, but still felt NASCAR could have waited it out to go the full distance.

"We were just a lap away from an opportunity to make a pass. I had one shot at the 43 (Aric Almirola) with a run and the 13 (Casey Mears) got to my right rear corner and I just couldn’t move up and do anything with it," said Vickers. “We were just kind of stuck there and then the rain just came at the wrong time for us and the right time for them.

"Would have really loved to have put this car in victory lane, and that's frustrating," said Vickers. "You know, I was hoping they would wait it out. We've got lights, it's Daytona, its only 2:00, but I guess they felt the need to call it, so it is what it is."

As if to prove NASCAR’s call, the track was still inundated with rain hours after the checkered flag waved.