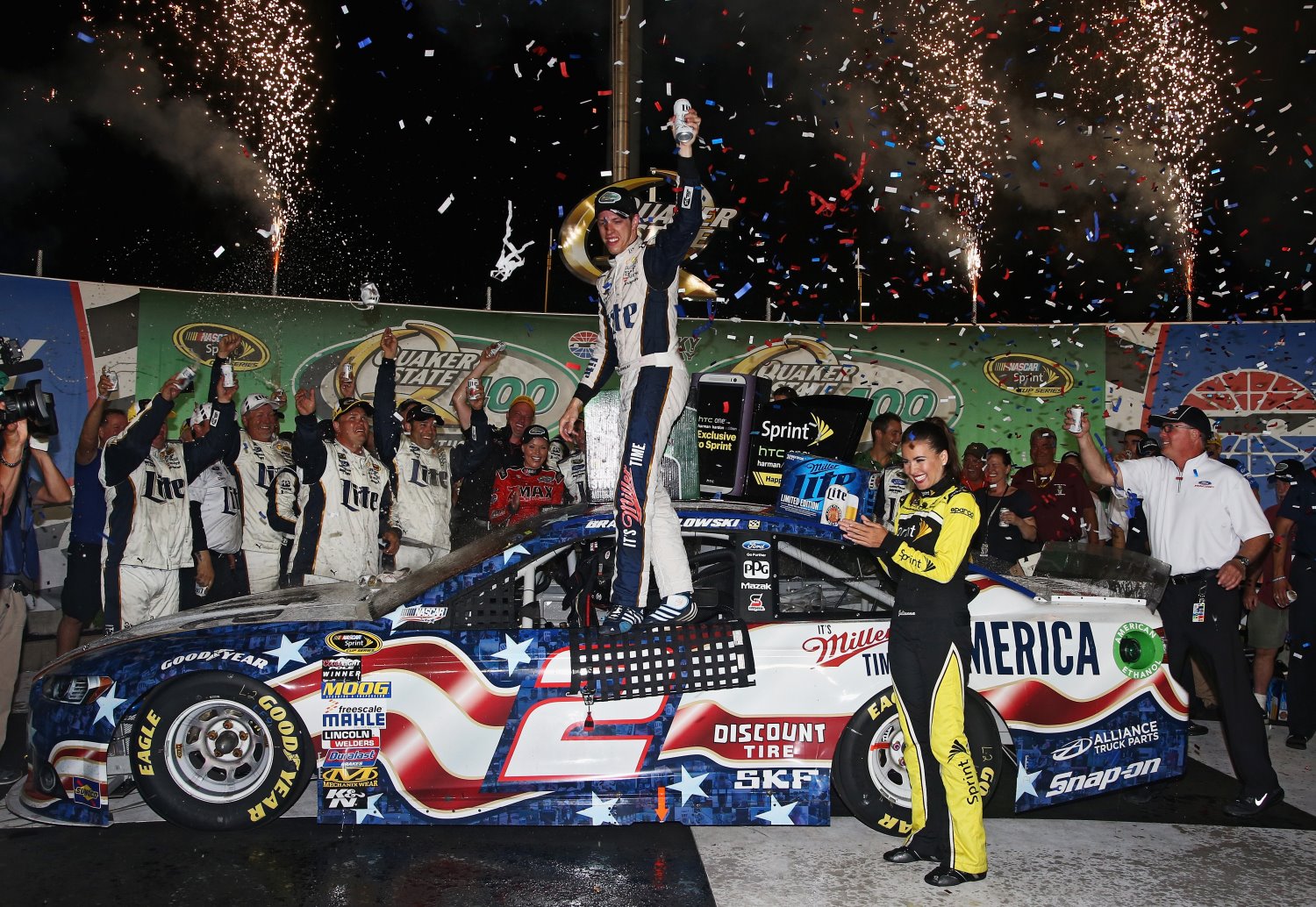 Sometimes the fastest car doesn’t always win. Tonight, at Kentucky Speedway, it did.

Battling back from varying pit stop strategies, Brad Keselowski climbed six positions over the final 47 laps to pick up his second win of the season in dominating fashion in Saturday night’s Quaker State 400 presented by Advance Auto Parts. By winning, Keselowski guarantees himself a berth into the Chase and also becomes the first two-time winner at the 1.5-mile speedway in three years.

"Our car was awesome," said Keselowski, who earned his 12th career NASCAR Sprint Cup Series win. "The team did a great job and I’m just really thankful to have a car this good. I don’t know how else to put it. The Miller Lite Ford Fusion was hauling and I just can’t wait to get deeper in the season and the post-season. I think this is where we need to be to have a shot at another championship, so I’m just real proud of everyone right now."

Pole sitter Keselowski led the opening 27 Laps until Denny Hamlin wrecked in Turn 4. The first yellow flag of the night would also serve as the scheduled competition caution.

Keselowski brought the field down pit road, where teams tried varying strategies. The top 10 cars elected for two tires, while the others took on four tires.

The Lap 34 restart kept Keselowski in control and by Lap 60 he had extended his lead to 3.5-second over Kevin Harvick. The gap would close on Lap 77 for Kyle Larson, who lost a right-front tire and slammed the Turn 2 wall.

Under the yellow, everyone took four tires, with outside pole sitter Joey Logano beating his teammate off pit lane ahead of Keselowski, Kyle Busch, Ryan Newman and Kasey Kahne.

Logano set the field back into racing conditions, but Keselowski was determined to put his Ford Fusion back at the helm, moving past the No. 22 on Lap 88 and by Lap 104 had extended his lead to 2.7 seconds. By Lap 125, Busch had knocked a chunk out of his lead, but a lap later, the yellow flag waived for debris in Turns 3 and 4.

Pit road became a very busy place and for the second time of the night, Keselowski lost the lead on pit road to Logano with Ryan Newman, Kyle Busch, Keselowski and Dale Earnhardt Jr. leading the parade back onto the racetrack.

The race resumed on Lap 132, but 15 laps later, Keselowski took the lead back from Logano.

A three-car incident on Lap 154 for Aric Almirola, Alex Bowman and Jamie McMurray brought out the fourth yellow of the night and sent the lead lap cars to pit road, where Keselowski and others taking two tires and fuel. Once again, Logano had the better stop and took the lead from Keselowski.

While Logano led for the Lap 161 restart, Keselowski didn’t waste any time and reasserted his control on Lap 163 and led until a Lap 177 caution for a solo spin by David Stremme. Pit road opened with the leader deciding to stay out, as did much of the top 10.

86 Laps remained when the green flag flew, with Keselowski fumbling, which allowed Logano to take advantage, but not for long as the ‘Blue Deuce’ quickly pedaled back to the point.

The Rochester Hills, Michigan native led through Lap 215, when Almirola lost a tire and hit the Turn 1 wall. The sixth yellow flag of the night was a welcomed sight for the lead pack, as they were within a few laps of having to pit under green flag conditions.

Kyle Busch, Ryan Newman, and Earnhardt Jr. remained on the track as they pitted before the caution waived and became the top-three leaders. Meanwhile, a two-tire stop allowed Paul Menard to beat Matt Kenseth off pit road and they restarted fourth and fifth respectively. Keselowski was sixth.

The Lap 220 restart saw Busch trying to fend off Ryan Newman, with the Team Penske cars of Keselowski and Logano stalking them from the rear. Keselowski made the move around Newman for second on Lap 233 and set his sights on leader Busch, who grew his lead to 1.7 seconds.

As the laps ticked away, Keselowski began to catch the No. 18 of Busch and when the No. 18 ran into trouble passing the lapped machine of Reed Sorenson, Keselowski was able to make up nearly 1.1 seconds over three laps to grab the lead from him on Lap 249.

Over the next 18 laps, Keselowski drove to a 1.015 second margin over Busch and claimed his second checkered flag of the season, his first since winning at Las Vegas Motor Speedway in March.

Even with the fastest car of the night, the 2012 NSCS champion wasn’t sure he would have enough to catch Busch at the end. "It was gonna be tough," he said when thinking about having to chase him down. "I knew it was gonna be really, really tough. I figured we’d get to him, but I didn’t really think I’d be able to pass him. I caught a little break in lap traffic and the car was just that good. I was able to take advantage of it and get the lead. That was awesome."

Keselowski trip to Victory Lane was momentarily interrupted, as he cut his right hand while opening a champagne bottle, which exploded in his possession. He rushed to the infield care center, where he received four stitches, changed his race uniform and returned to Victory Lane for additional post-race celebrations.

"We were playing around with some champagne bottles and as I told my good friend, ‘We should have stuck with beer.’ We were having too much fun with champagne and one of the bottles broke and I cut my hand open. It’s no big deal," the 30-year old said.

As for Busch, who racked in three top-three finishes across NASCAR’s three National divisions this weekend.

"We were a lot better than we’ve been all year long and that’s a testament to what the guys did overnight fixing this M&M’s Toyota Camry into what I could drive today and making it fast," Busch sounded. "We had good speed, so I was real proud of that effort. I got so loose there at the end — the loosest I’ve gotten all day and the loosest I’ve been in traffic all day too. I just couldn’t hold on and couldn’t keep it where I wanted it, and was sliding all over the place and just trying not to wreck basically."

For Newman, it was his first top-five finish since joining Richard Childress Racing this season.

"It’s a big gain for us and our Caterpillar Chevrolet," he said. "All the guys at RCR and ECR got us that first top five of the season. I’ve got to thank everybody from Caterpillar and Quicken Loans for the opportunity they’ve given us this year. It was a good run. The No. 2 (Brad Keselowski, race winner) was obviously the fastest car all night. The No. 18 (Kyle Busch) got a little bit better there at the end. We were pretty solid. We never really changed the car. It felt like we were pretty neutral and didn’t want to screw it up. So, we ended up where we did."

Jeff Gordon finished sixth ahead of Kevin Harvick, Kasey Kahne, Joey Logano, with an alleged down cylinder and Jimmie Johnson comprised the remainder of the top-10.