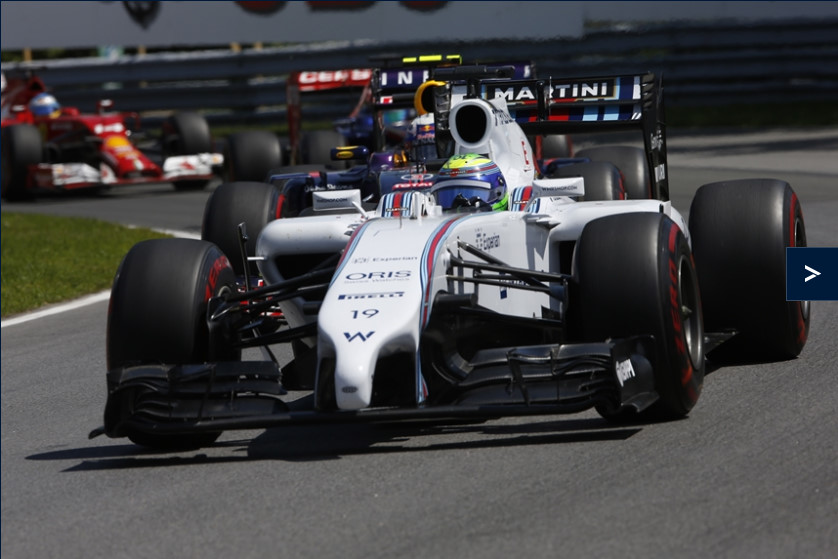 Using the superior Mercedes power unit coupled to a Williams chassis that loves fast sweeping corners enabled Felipe Massa and teammate Valtteri Bottas to lock out the front row for the Austrian GP at the Red Bull Ring.

Mercedes powered cars will occupy 8 of the top 12 spots on the grid.

Nico Rosberg will start 3rd for Mercedes while his teammate Lewis Hamilton could only manage 10th if spinning the superior Mercedes in a failed attempt to beat his teammate and championship point leader Rosberg.

The pressure is mounting on title favorite Lewis Hamilton, with even the Briton admitting his 2014 challenge could be slipping away.

After a car failure in Montreal put him 22 points behind Mercedes teammate Nico Rosberg, Briton Hamilton insisted he cannot afford many more strikes against him.

Going into the Austria weekend, the 2008 world champion said: "Another situation like that (Montreal) and that gap might start to get too big."

Indeed, the mountain became even steeper after qualifying, where Hamilton secured just a ninth place spot for Sunday's race.

Rosberg, in contrast, is third, behind the shock Williams one-two led by Felipe Massa.

In the silver camp, however, it is the German with the psychological edge at present.

And, sparking comparisons with Hamilton's Monaco anger after a controversial qualifying mistake, in Austria it was Rosberg's turn to furrow his brow.

"I could not put the perfect lap together because of Lewis spinning," he said.

"I had to lift off, so that definitely cost me today."

Unlike Rosberg in Monaco, however, Hamilton certainly did not benefit from the qualifying action in Austria.

But although some think Hamilton's sudden spin under braking looked like a technical problem, the feeling within the silver-clad garage is that the 2008 world champion simply made a mistake.

"I'll have to look at the data to see what happened," Hamilton told Sky.

"I'm ok — it's a long race tomorrow. We have the best engine so hopefully I will be able to move my way up."

"We are just looking at the data," he told Austrian broadcaster ORF. "It looks as if the rear brakes blocked, at precisely the moment when he downshifted.

"Whether it was a driver error or a problem, I don't know exactly yet."