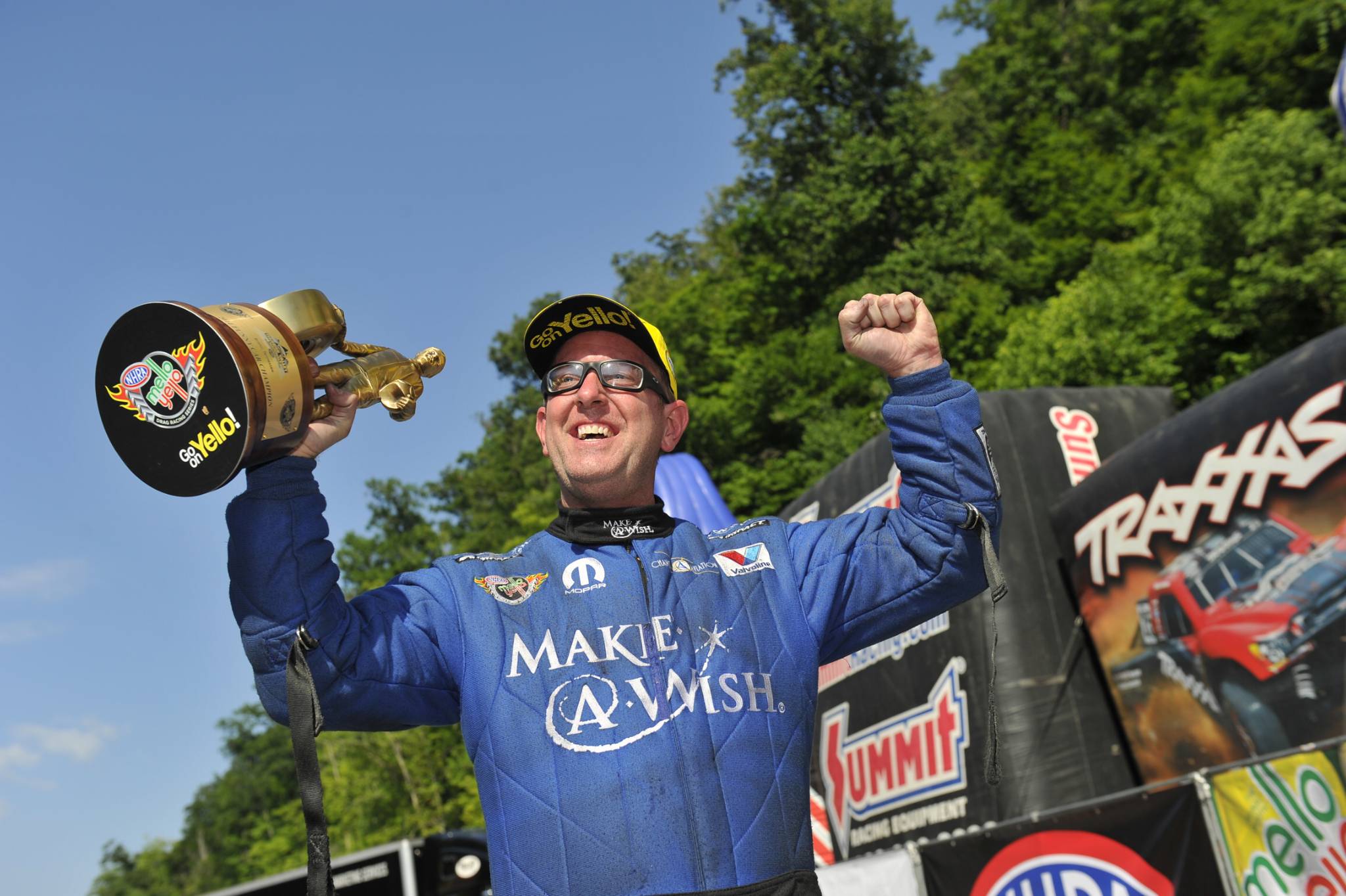 “Upset" was the word of the day in Sunday’s eliminations as none of the top qualifiers in the top three divisions made it out of the second round, with Top Fuel no. 1 qualifier Brittany Force falling to “The Greek" Chris Karamesines in the opening round.

Tommy Johnson, Jr., competing in his first full NHRA season since 2008, advanced to his first final round of the season and beat out Wilkerson for his first win since Englishtown in 2007, breaking a 53-race final-round drought and collecting his 10th-career win.

Johnson, who came into Sundays eliminations as the fifth qualifier, knocked out Cruz Pedregon, points leader Robert Hight and Matt Hagan to reach the finals for a first-ever money-round match-up against Wilkerson.

“I’m thrilled that we were able to get it done and all that work paid off," Johnson Jr. said. “The guys did a great job today. We’ve qualified great we just couldn’t get it to go our way on race day. We’ve been competitive and we just couldn’t close the deal. It’s tough out here. I wanted to prove that we’re not in a slump and we needed to step it up a little bit and we did."

Hight remains atop the points standings in the Funny Car division over his boss – and father-in-law – John Force, who falls 265 points back.

In Top Fuel, Langdon finally got into the win column with his ninth-career victory and his first at Bristol with an easy run over Kalitta.

Reaching his second final-round in the last three events, Langdon led wire to wire from the start, going 3.902 at 316.08 mph as Kalitta went up in smoke near the halfway mark fell short for the second race in a row, running a 4.128, 260.97 in the loss.

“With the stiff competition in Top Fuel, one thing you have to learn is patience and not to take anything for granted," said Langdon, who won out over teammate Khalid alBalooshi, Terry McMillen and Bob Vandergriff Jr. to reach the finals. “We knew it was going to be tough. We’re still learning. Fortunately, we got this win and most importantly, we hope to continue earning those Mello Yello points.

“I was a little worried about pedaling in the final going up against the Kalitta group," Langdon said. “They are definitely the hottest car in the circuit. That’s why it is great to be a part of the Alan Johnson and Al-Anabi Racing. You feel like you have a pretty good race car too."

Despite the loss, Kalitta increased his lead in the Top Fuel points standings to 120 points over Antron Brown.

Erica Enders-Stevens padded her lead in the Pro Stock standings with a win over rookie Jonathan Gray to post her third win of the season and ninth of her career while spoiling Gray’s career-best effort.

Enders-Stevens was the third qualifier coming into the days eliminations and won out over Larry Morgan, Greg Anderson and Jeg Coughlin to reach her third final round of the season and her first-ever meeting – final round or otherwise – against Jonathan Gray.

Gray, running in just his seventh Pro Stock event, advanced past the second round for the first time in his career – beating out his brother and no. 1 qualifier Shane Gray on a holeshot to advance to the semi-finals.

In the final round, Enders-Stevens and Gray posted identical .063 lights, but it all went up in smoke for Gray as he faltered right out of the gate as Ender-Stevens streaked to the finish, posting 6.698 at 207.15 mph for her first Bristol win.

“We had to dig deeper this weekend," said Enders-Stevens. “Everybody out here is hungry. As a driver, I knew I had to step up to the plate and get up on the wheel. Momentum is huge in this sport and we just need to continue to carry it. To get it done today meant the world to me and my team gave me a car to drive to the winner’s circle."

Ender-Stevens extended her points lead by 32 points over Coughlin, who now trails by 155 points.