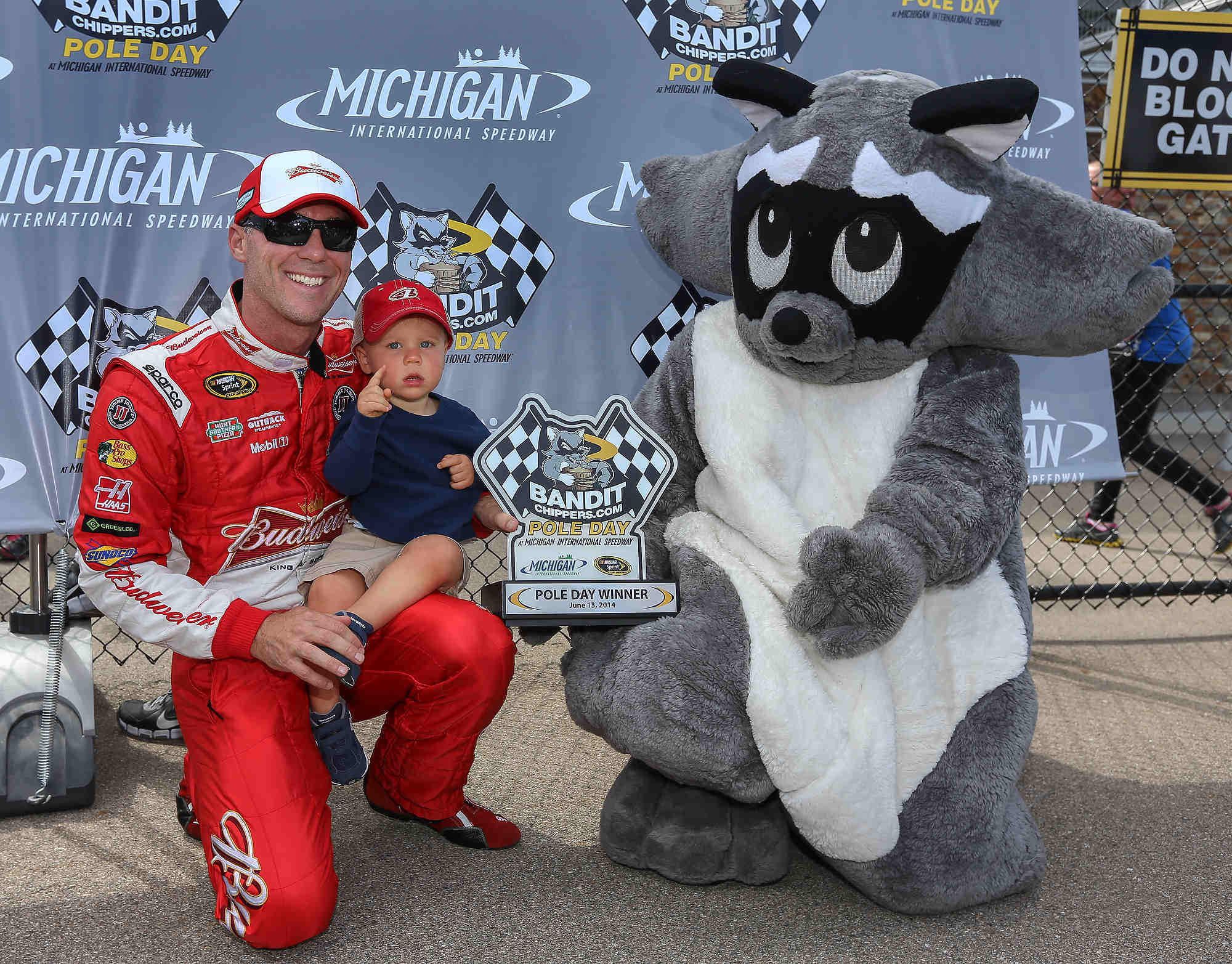 This is Harvick's first career pole at the 2-mile track. On Sunday, he'll go for his second win here. The Stewart-Haas Racing driver set a track record in the final round with a speed of 204.557 mph, the fastest qualifying speed in the sport since 1987.

Dale Earnhardt Jr., Aric Almirola and Paul Menard will round out the top five.

Kasey Kahne, Kyle Busch, Clint Bowyer, Martin Truex Jr., Greg Biffle, Matt Kenseth, Ryan Newman and Austin Dillon are a few of the drivers that failed to advance to the third and final round.

Notable drivers that did not advance to the second round were Stewart-Haas Racing teammates Tony Stewart and Danica Patrick, along with Team Penske part-timer Juan Pablo Montoya and Joe Gibbs Racing regular Denny Hamlin.

The Sprint Cup Series Quicken Loans 400 will take place on Sunday at 1 p.m. ET with coverage on TNT.

KEVIN HARVICK, NO. 4 BUDWEISER CHEVROLET SS – POLE WINNER
BEFORE THIS KNOCKOUT QUALIFYING CAME INTO PLAY SIX NASCAR SPRINT CUP SERIES POLES. YOU KNOW HAVE THREE WITH THIS FORM OF QUALIFYING:
“I think that is just a credit on our Budweiser and Stewart-Haas race team for putting fast race cars on the track. When you put it together with the Hendrick Motorsports engine package it creates a lot of speed and it makes coming to these place a lot of fun. Really excited to start on the pole and get that first pit box and hopefully we can put the whole day together on Sunday."

WAS YOUR CAR JUST THAT GOOD BY ITSELF OR DID YOU TRY TO FIND SOME AIDE AS WELL?
“We just kind of wanted to go right at the beginning of that session. The second session I got too close to the No. 88 coming to the green and I felt like it hurt my lap. We just tried to get a clean lap that time. The car actually ran the fastest that it had. I think clean air for us was probably a better decision."

YOU CAN’T HOLD YOUR BREATH AROUND HERE THAT LONG, CAN YOU?
“You know, it’s actually the opposite. You just have to relax and really pay attention to not overdrive it because it’s so easy to miss your line on the entry to the corner. So, I’ve just got to thank everybody on my Budweiser Chevrolet; and everybody from the Hendrick Motorsports engine shop. You put those two packages together and it creates a lot of speed. My guys are doing a great job and we just have to keep doing everything we’ve been doing, and we have fast race cars."

HOW FRUSTRATING HAVE THE WEEKS BEEN WHEN YOU HAVE THE FAST CARS AND YOU HAVEN’T BEEN ABLE TO COME THROUGH WITH THE WIN?
“Well, it’s just part of it. In my career I’ve won a lot of races that I probably shouldn’t have won and lost a lot that you should have won. So, it’s a vicious cycle and we’ve had flat tires two weeks in a row and really fast cars to go along with it. But, you just have to keep plugging along week by week, and that’s where the experience in this sport, and a lot of these guys have been around this a long time. Monday morning, you’d better forget what you did last week because you’ve got to worry about the week coming."