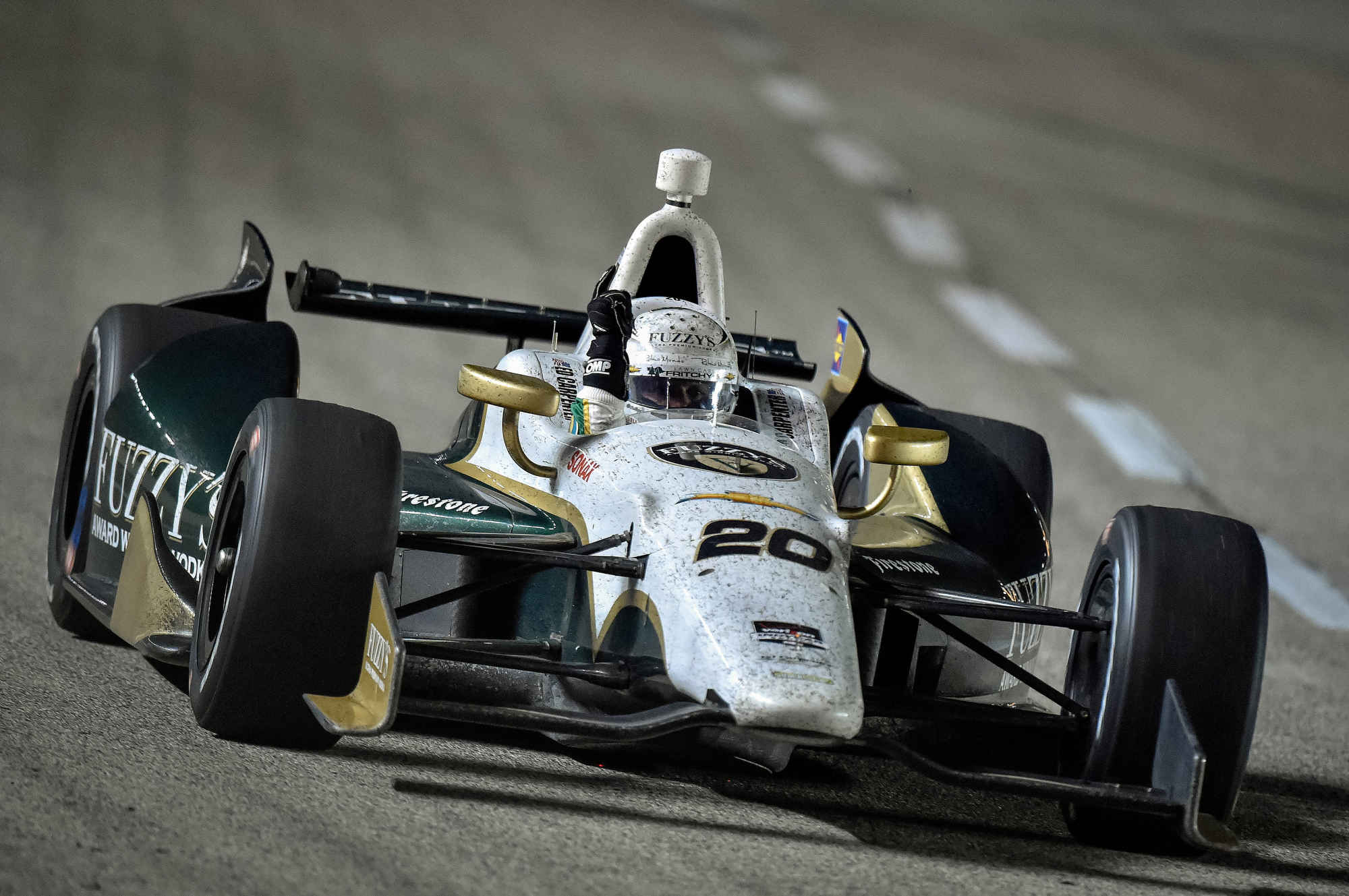 The Verizon IndyCar Series made its annual pilgrimage to Texas Motor Speedway this past weekend for the Firestone 600. Driver-owner Ed Carpenter scored his third career victory and first of 2014. It was the second win of the year for the #20 Fuzzy’s Vodka/Ed Carpenter Racing Chevrolet, which won this past in April in Long Beach with Mike Conway behind the wheel. Of course, Carpenter and Conway have entered into a unique partnership in 2014, with the owner handling driving duties on the ovals, and the unassuming Brit running the road and street courses.

And it is with Ed Carpenter Racing, where we will begin our Texas Postscript.

Don’t let the polite, soft-spoken, All-American family guy thing fool you. Because, when IndyCar’s only owner/driver buckles into the #20 Fuzzy’s Vodka Chevrolet, he transforms into a cold-blooded assassin. As he showed Saturday night, anytime the series visits a high-speed oval a la Texas, Fontana or Pocono, Carpenter is not merely one of the contenders, but the man to beat. And on a night when he and Will Power were clearly the class of the field, one mistake between the two was going to determine who took the checkered flag.

Power, of course, had a pit-lane speeding violation late in the race, while Carpenter kept things clean to score his third career win.

Also, Carpenter becomes more of a factor in IndyCar season due to the unique dynamic which he has established at…

I made mention of this after Conway won Long Beach in April. It’s an oft-discussed subject to mention how the hiring of Conway for the road and street course events has changed the dynamic at ECR, and it clearly has. While Carpenter made great strides on the road and street courses in 2013, the team was simply no threat at those races. The combination of the two in 2014 has made the #20 Fuzzy’s Vodka Chevrolet a contender everywhere.

However, the more intriguing dynamic to me was always going to be what effect the Carpenter/Conway combination would have on the rest of the field.

See, from ECR’s perspective things are really simple: they show up every weekend going for the race victory. They won’t exactly state it this way, but having enough Fuzzy’s Vodka on hand with which to celebrate their wins is a bigger concern at ECR than where the team sits in the championship standings.

Yes, Carpenter and Conway are essentially racing pressure free. If they happen to be a little off the pace one weekend, well they can go off strategy. If everyone else is running red tires, well they can try blacks, and see if a reverse strategy works.

And because both Carpenter and Conway can beat anyone in their respective disciplines on their day, the intrigue to me all along has been and will continue to be what factor the #20 team plays in the title chase. Keep in mind, the person team Fuzzy’s has beaten both times to the checkered flag this year…

Yes, Will Power has finished runner-up both times car #20 has been to victory lane in 2014. Of course, we’re well aware Power doesn’t need any more mitigating factors potentially impeding a championship run. The hard-luck Aussie scored three consecutive 2nd place championship finishes from 2010-2012, when he went into the last race with a chance to win the title only to be denied all three times.

So far, Power has undoubtedly been the best, and most consistent driver in the series in 2014 with two wins, three second-place finishes, and no finish worse than 8th. However, both Helio Castroneves and Ryan Hunter-Reay remain in striking distance, particularly with double-points available at both Pocono and Fontana. And thus far, Team Fuzzy’s has done its finest work on weekends Hunter-Reay and Castroneves have struggled.

More on the Championship

Take a quick gander at the standings here on AR1. While Power has by no means separated himself from Castroneves and Hunter-Reay, I would offer that those three have essentially separated themselves from everyone else. While Simon Pagenaud sits 91 points back in fourth and is very strong, keep in mind Pagenaud has never finished on the podium at an oval track. With 4 ovals remaining, two of which pay double points, the Frenchman would not seem to be a threat to the three ahead.

Marco Andretti, Carlos Munoz, and Juan Pablo Montoya sit fifth, sixth and seventh respectively, and it’s hard to see any of them closing the gap.

The man who could still theoretically make a run is defending series champion Scott Dixon in 8th. However, the Kiwi is 156 points behind Power, 121 behind Castroneves, and 96 behind Hunter-Reay. Sure, we all know what Dixon did a year ago, but it would be difficult to see him passing all three.

Yes, without trying to take away any excitement, unless Dixon makes a move soon, I think we’re likely down to a three-horse race for the championship. Moving on to another championship…

Ryan Hunter-Reay’s win at Indy was the third consecutive win in 2014 for the Japanese marque, who left the Brickyard with the lead in the Manufacturers’ Championship.

To be clear, I am not in any way, shape or form, writing off Honda. Certainly, The Bowtie Brigade has had their number over the past two weekends. However, anyone who would ever dismiss Honda particularly after a string of defeats knows nothing about that incredibly proud company.

I’ll just repeat what I said last week, and before the season started. For the 2014 season, I believe Chevrolet has a slight advantage over Honda, primarily due to the quality of their teams. As we saw in Detroit and Texas, when Honda’s top team — Andretti Autosport — struggles, Honda does not have the bullets in reserve to match Penske, Ganassi, and the now incredibly formidable ECR. And keep in mind: Team Ganassi has yet to even hit their stride.

Kudos to Texas Motor Speedway, IndyCar, the Holmatro Safety Team, and whoever else contributed to getting the track ready for a two-lap race to the checkered flag after Takuma Sato’s blown engine with 6 laps remaining. Of course, the fact things were cut relatively close to having the finish under caution, brought up the inevitable, yet incredibly tired, debate of whether IndyCar should adopt a NASCAR-style green-white-checkered finish. Third-place finisher Juan Pablo Montoya, who of course, spent the last seven years running NASCAR raised this subject.

To be clear, I mention NASCAR not as a criticism, merely as a reference. While many will simply dismiss any idea that in which the acronym NASCAR is used adjectivally, that is not the reason to dismiss the GWC finish. Rather, the GWC compromises something that is fundamental to the race itself: racing to a pre-determined distance.

Granted, I believe measures should be taken in order to finish under green. The red flag on lap 193 at this year’s Indianapolis 500 was a perfect example. That was the right call, as the track would not have been cleaned in time without it. It was similarly the correct call at the 2012 season-finale in Fontana to red flag the race, giving it the chance to finish under green.

However, to alter the predetermined mileage or time, is to alter something fundamentally inherent to the race itself. While concluding races under the yellow flag is not ideal, turning the race distance into a moving target is not the solution.

Speaking of 'The Show'

I’ll be the first to concede this year’s Texas race wasn’t exactly a classic in terms of entertainment. Power ran away from the pack early, while Carpenter did the same later. A late caution, and Power pitting for fresh tires in the final five laps, made for an intriguing finish, but overall the race was nothing memorable.

What I did find intriguing however was the reaction by many to the lack of entertainment. Many of these reactions followed with pleas to change the aerodynamic package and allow more down force as they did in previous years.

Granted, such reactions are partially a function of the social media environment we live in. Further, people are entitled to their opinions and although I disagree with such assertions, my personal objections and the reasons for them constitute an altogether different discussion.

Allow me to simply offer the following. Not every race is a great one. Not every finish is “close," nor is every moment of every lap “exciting." Sometimes Sebastian Vettel, Ayrton Senna, and Jimmie Johnson are just better than everyone else, and win by large margins.

What I saw Saturday night were two guys (Power and Carpenter) who were clearly the class of the field. Did it make for the most entertaining race? No. Does it mean the series should look at ways to liven up the show through improvements to the aerodynamic rules? Yes, but that should be an ongoing process, not a ‘sky is falling’ reaction to something that in my opinion wasn’t a falling sky anyway.

No, what happened was simple: Power and Carpenter were faster than everyone else. It happens sometimes. Maybe I’m dating myself, but it seems that in our need to be “entertained" all-the-time society, we’ve lost sight of the fact that it is an automobile race. And sometimes in racing there is somebody (two people in this case) simply better than everyone else.

As for two things that would help the show…

****I know the reasons for this are an altogether different subject. However, twenty-two cars at a track like TMS is simply too few. To keep its oval shows strong, the series needs to strive to have 25-27 cars at places like Texas and Fontana and 28-30 at a place like Pocono.