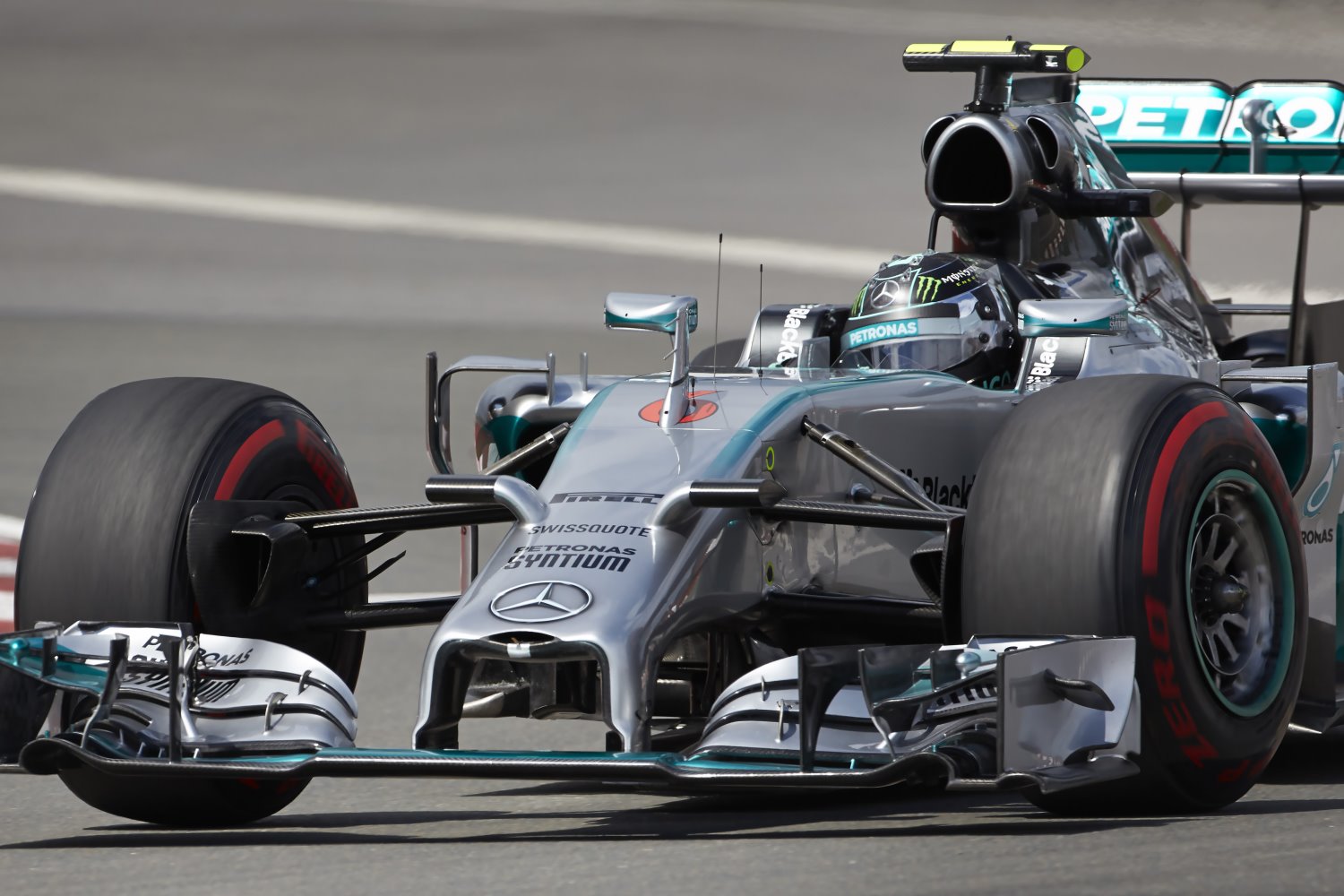 The Mercedes team continued their complete domination of F1 by going 1-2 in final qualifying for the Canadian GP in Montreal. The only cars to get into the 1m14sec bracket, the two Mercedes drivers only go as fast as they need to secure pole, and for the 2nd race in a row, Rosberg beat Hamilton by 1/10th of a sec.

Hamilton tried to beat Rosberg on his final lap, but he made a mistake and came up short.

Sebastian Vettel's Red Bull Renault lemon actually ran the entire session without breaking down on him and he turned the 3rd fastest time but a whopping 0.674 sec behind Rosberg.

He was followed by two more Mercedes powered cars – the Williams of Valtteri Bottas and Felipe Massa.

Daniel Ricciardo slots in 6th ahead of the slow Ferrari with inferior pull-rod front suspension of Fernando Alonso.

Alonso said his qualifying lap was on the limit, and that other Formula 1 teams are simply faster than Ferrari and their pull-rod front suspension that AR1.com predicted would be their undoing once again this year.

Alonso finished nearly a second off polesetter Nico Rosberg, despite what he labeled as a very good lap.

"I think it was the limit," said Alonso of his seventh place on the grid.

"Obviously the rest of the cars are faster than us and they went faster during all of qualifying. It's not like in Q3 they suddenly returned. It was a difficult Saturday for us and it means we were not fast enough."

Nico Rosberg
It's been a great weekend so far and I'm really pleased with how I have been able to improve my set-up from session to session. Even before Qualifying we made some quite big changes and they worked out perfectly. So I am very happy with starting from pole tomorrow. That was very important as there aren't many opportunities to overtake here, particularly if you are in the same car. I think it will be a battle between the two of us out there tomorrow as the gap to the other cars was quite big in Qualifying today and also on our long runs on Friday were strong. This is a such a good track here in Montreal and the fans create a special atmosphere so I hope we can put on a great race tomorrow for them.

Lewis Hamilton
Nico did a fantastic lap but it wasn't the greatest qualifying session for me because I went wide a couple of times on my lap, in turns six and eight. It was very close, with just eight hundredths of a second in it, but Nico did the better job this afternoon. It's great for the team that we have a one-two on the grid but I am expecting it to be a tough race: it's not that easy to overtake here, especially in the same car and with Nico being so close on pace. I will do what I can tomorrow and we will be trying to score as many points as we can. I also want to say something about this amazing weekend in Canada. It's one of the best races of the year, especially because of the fantastic fans who make the atmosphere something special. We love coming here and I hope we can put on a great race tomorrow.

SEBASTIAN VETTEL
"The start of the last lap wasn’t great. I still didn’t manage to get that first sector right, I didn’t get along with the first two corners very well today. But, after that I tried to take more risk and it worked, so sector two was very good through the two chicanes, especially through the second one; I found a significantly better line and more time compared to previous runs. I then kept it together until the end, so a very good result. It was the maximum we could do – we were very close with those behind, half a second behind the Mercs, but then four cars were within four to five hundredths of a second of each other, so I’m happy to be the quickest of those. Strategy could be a bit of a surprise tomorrow, we’ll have to wait and see what happens but Williams is strong here and the Mercedes powered cars will be looking forward to the straights. I will try to stay as close as I can to the front two and get some tow. If we have a chance to attack them, then we should go for it."

Valtteri Bottas
We need to be happy with the result. It was really, really close. On the last run there was some traffic which cost the opportunity to improve the time, but luckily I had done a good lap on the first run in Q3. We've been competitive all weekend so I'm looking forward to the race. I'm very happy with the car, we've made so much progress. I know we can challenge Red Bull here and we have great straight-line speed, so we'll see.

Felipe Massa
It was a good session, definitely our car shows good performance. It was very tight from position three to six, with five cars in one tenth, so P3 was possible. Unfortunately I didn't have the perfect lap and it wasn't enough to be third, but I cannot be disappointed. I feel really happy for the car we have. The race is long so let's try to do a good one tomorrow, I'm confident we can have a good, competitive race.