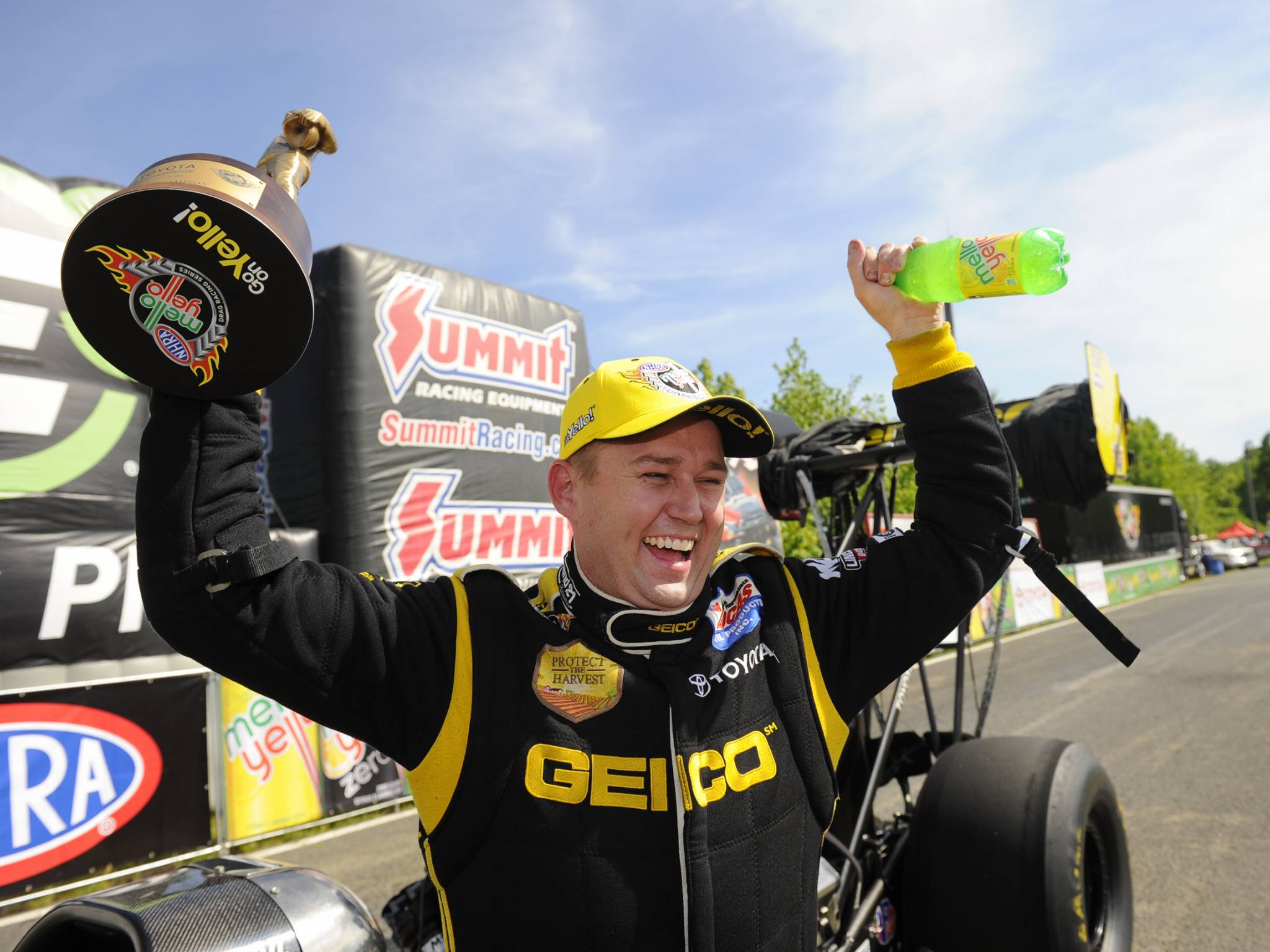 Crampton powered his GEICO/Lucas Oil dragster to a 3.819-second pass at 320.51 mph to defeat Top Fuel points leader Doug Kalitta in the final round. The victory came during the Australian’s ninth career start after replacing Morgan Lucas in the off-season and only a week after Crampton and his girlfriend welcomed the birth of their first child.

“This is all surreal right now," Crampton said. “I’m really just living the dream. I know that sounds cliché, but I’m just lucky to be in the position I’m at in my personal life and my career."

Crampton was the No. 2 qualifier for the event, his career-best starting spot. The win was extra sweet given Crampton’s milestone achievement.

“I had no idea coming into this race that somebody could possibly be the 100th new winner in Top Fuel, but it’s pretty special to get that particular point on the list," Crampton said. “You think about how many great drivers there are on that particular list, and it’s icing on the cake for me there."

Kalitta was appearing in his fifth final of the season in his Mac Tools dragster. Despite the defeat, Kalitta increased his points lead over second-place Antron Brown to 103 points.

Pedregon was the class of the Funny Car field all weekend, going from No. 1 qualifier to the race victory with a performance of 4.126 at 301.33 in his Snap-on Tools Toyota Camry over Del Worsham in his DHL Camry in the final. The win was a relief for Pedregon, whose team has struggled early this season.

“It was a tremendous points day," said Pedregon. “To say I’m excited and happy would be an understatement, but I also feel relieved a little bit. We’ve dug ourselves a pretty good hole this year."

The win was Pedregon’s 35th of his career and first of the season. With the victory, Pedregon tied NHRA legend Don Prudhomme for fourth on the all-time Funny Car wins list.

“Prudhomme is my hero, and it means a lot [to tie him]," Pedregon said. “I’ve been doing this a long time. I’ve had plenty of opportunities, but I think my biggest accomplishment is the fact that I have been doing it so long in different scenarios. To be able to do this at this level and maintain it 20 years later means everything to me."

Coughlin secured his second Pro Stock win of the season and 58th of his career by defeating Greg Anderson in the final round with a 6.510 at 213.94 in his JEGS.com/Mopar Dodge Dart.

“We had the kind of conditions that Pro Stock cars love today with a great barometer and not a cloud in the sky, but you had to work for it," Coughlin said. “They gave us enough time to figure it out, and we had a great day."

Coughlin, the defending and five-time world champ, has reached the final in the last three events, also winning Atlanta and finishing runner-up in Topeka. He beat Anderson’s Summit Racing Chevy Camaro in both finals this season.

Erica Enders-Stevens had a great weekend performance-wise in her Elite Motorsports Chevy Camaro; she reset both ends of the Pro Stock national record with her 6.464-second e.t. and 215.55-mph speed.

"We are back," Hines said. “I think we put an exclamation point on that this weekend. We’ve been digging the last year and a half to get back to where we were. I’ve always said that racing gets in the way of our R&D, and this winter, we had a chance to get a lot of work done, and we’re starting to reap the benefits."

A three-time Pro Stock Motorcycle world champion, Hines recorded his second win of the season and 34th of his career. He leaves Englishtown having increased his points lead.

Von Smith raced to his first victory of the season and sixth of his career during the NHRA Pro Mod Drag Racing Series portion of the event, presented by Powerocks.

Smith, the No. 5 qualifier, drove his Al-Anabi Racing/Dr. Moon ’69 Camaro to a 5.966-second pass at 241.58 mph, defeating No. 14 seed Jason Hamstra in the final. It was Smith’s second consecutive Pro Mod final-round appearance.