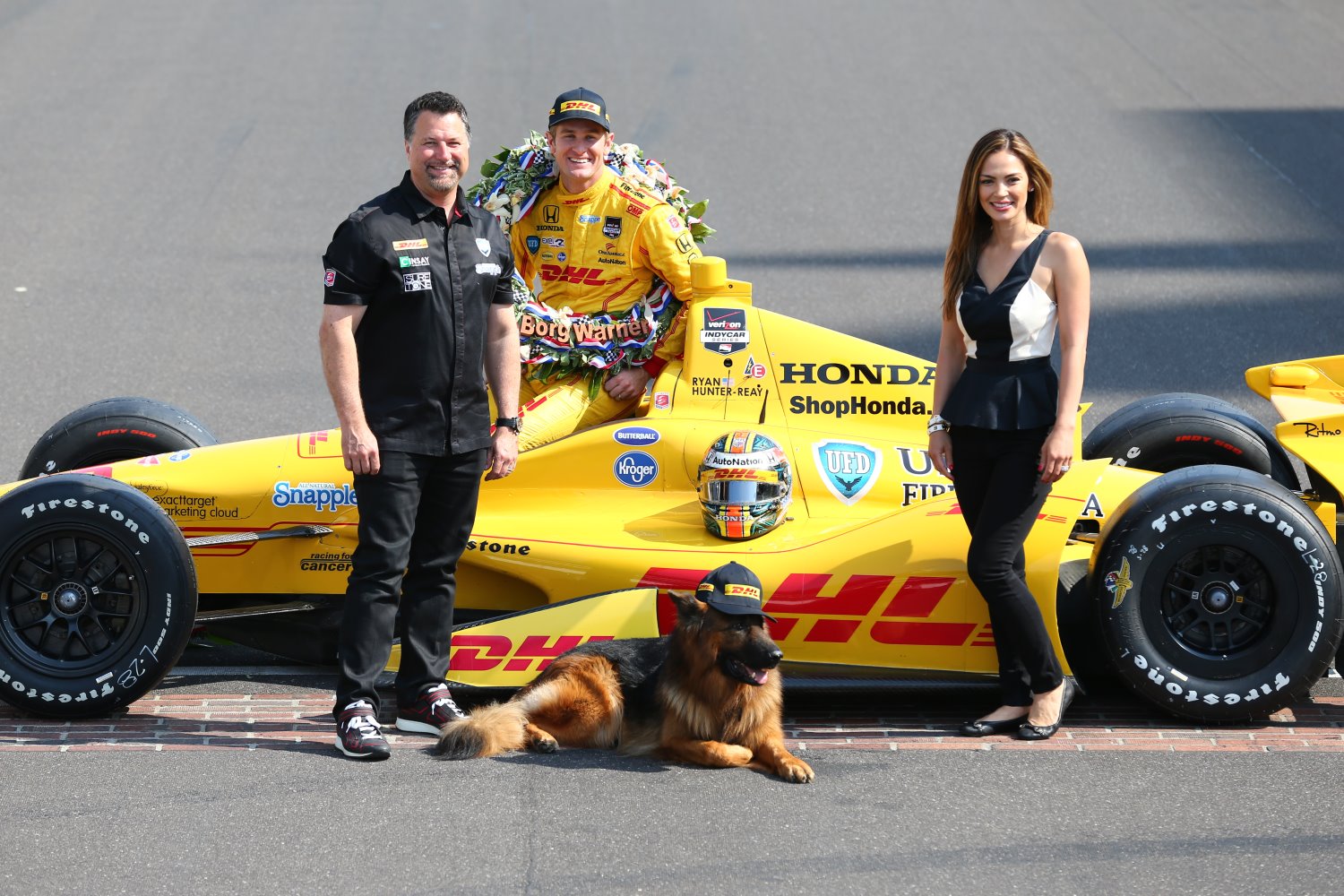 May 2014 was always going to be somewhat memorable. A controversial IndyCar race on the IMS road course to start the month, somewhat odd changes to the Indy 500 qualifying format were, the appearance of NASCAR star Kurt Busch, and reappearance of former Indy 500 winners Jacques Villeneuve and Juan Pablo Montoya were for better or worse, amongst the headlines that were going to make this May a little different at the Indianapolis Motor Speedway.

What couldn’t be predicted was what happened Sunday. The second-closest finish in race history, an epic duel in the closing laps, a nice assist from Mother Nature, and a popular first-time winner, who can easily be trumpeted as an embodiment of The American Dream, and testament to the spirit of perseverance will amongst other things make the 98th running of The Greatest Spectacle in Racing, one for the ages.

Today, AutoRacing1 will cover those topics and more from the 2014 Indianapolis in our Indy 500 Postscript. Enjoy!

Understandably, everyone is talking about the closing laps, in which Ryan Hunter-Reay ultimately triumphed by 0.06 seconds over Helio Castroneves. Hunter-Reay, of course passed Castroneves twice in the closing 4 laps, and the back stretch pass on lap 197 was the stuff of legend. However, for the purposes of this piece, let me call attention to what will be my enduring memory of RHR’s win: the opening laps, not the closing ones.

Remember, this race ran caution free for the first 150 laps. Hunter-Reay started 19th, and after the green flag fell began picking off drivers ahead of him. And this was no methodical work your way through field slowly stuff.

Rather, quick work would be made of drivers such as Oriol Servia, Justin Wilson, Jack Hawksworth, and Sebastien Bourdais before Josef Newgarden, Scott Dixon, Kurt Busch, Tony Kanaan and Simon Pagenaud would follow. And by lap 100, in the absence of any caution periods; in the absence of any attrition claiming those ahead of him; and in the absence of any significant performance advantage in a spec-series, Hunter-Reay had passed not only those mentioned above but Juan Pablo Montoya, Helio Castroneves, Marco Andretti, and pole sitter Ed Carpenter.

While, I’m not sure this needs to be stated but the names listed above is not the invite list for a Wanker Convention. No, RHR blasted through a murderer’s row, which included a NASCAR champion, a 7-time Grand Prix winner, 7 Indy 500 wins, and nearly 150 Indy Car wins. Again, this was done absent any caution periods to bunch the field, absent attrition, and absent any discernible performance advantage, the number 28 appeared atop the famous scoring pylon.

Yes, this was a drive for the ages by lap 100 people. The win was merely validation.

Of course, Hunter-Reay’s win meant Castroneves was denied the chance to join A.J. Foyt, Al Unser and Rick Mears as the only four-time winners of The Greatest Spectacle in Racing. The typically ebullient Brazilian, who drove the beautiful Pennzoil throwback livery this month, was understandably disappointed in the aftermath. But the cards have fallen right at Indy for Castroneves before, and any disappointment I felt for him, paled in comparison to that I felt for the third-generation Andretti driver.

Sure, Andretti might not have had the car to match the pace Castroneves and Hunter-Reay in the final stint. Whatever the case, it was the fourth top-3 finish without a win in nine Indy starts. Only Ted Horn (one 2nd, four 3rds) has more.

And while the narrative of Andretti misfortune was more than offset by Hunter-Reay winning for the team owned by Marco’s father, another chapter was added to the Andretti Curse (now 45 years) behind-the-wheel.

Hunter-Reay coming through the field was not quite matched but to a certain degree mimicked by one-offer Townsend Bell, and rookie Sage Karam.

Bell started 25th, and found himself as high as second place, before an accident on lap 190 ended his day. While he probably did not have the car to challenge Castroneves and Hunter-Reay, Bell put forth more than an impressive showing, and would have richly merited a top-5 finish. Karam drove aggressively, yet clean, all day, and earned a well-deserved ninth place finish.

Also, if you look up Karam’s record on ovals in the junior series, the 18-year old Nazareth, PA native could be a challenger for Indy 500 wins for years to come. Unfortunately for Karam, he didn’t choose the best year to be a rookie at Indy….

While Busch turned in some impressive times in practice, and then performed above expectations in qualifying, I did not see a sixth-place finish out of the 2004 NASCAR Sprint Cup Champion, making his IndyCar debut.

After all, 500 miles has a way of really separating contenders from pretenders. Seven pit stops, the turbulence of traffic, cars both high and low, on a fast track, and speeds 25 miles-per-hour above what he has ever run during a race, then throw in the fact, Busch doesn’t exactly have the temperament one would associate with managing the ups-and-downs of a long race, I didn’t expect a top-10 finish.

But give Busch credit. All month long, he took an inquisitive approach. His well-documented lethal temper, and at times condescending personality were nowhere to be seen. His driving as a rookie was stupendous. He was rightfully awarded with 2014 Indianapolis 500 Rookie of the Year honors.

Which brings me to my next point

There were cries for Karam to be voted rookie of the year, after his impressive drive from 31st to ninth. Don’t get me wrong: Karam is a stud, and his performance in many years would have been more-than-deserving of ROY honors.

But at the end of the day, Busch both qualified and finished the race ahead of Karam. And although many would have probably liked an 18-year old IndyCar ladder product to win ROY instead of a 35-year old NASCAR-regular, given the terms outlined for which it determines rookie of the year, IMS got the call right giving it to Busch.

This leads me to another thing IMS/IndyCar got right….

It was rather predictable to hear the “NASCAR gimmick" accusations, when INDYCAR race director Beaux Barfield decided to red flag the race on lap 192 after Townsend Bell’s accident. There was of course, precedent for this, as the series had similarly brought out a red flag during the 2012 season-finale at Fontana.

And just like then, the decision Sunday was not a gimmick, it was not contrived entertainment, it was not fixing the outcome. No, throwing the red flag was 100% the correct call.

As for those, who mindlessly played the “NASCAR gimmick" card, if they keep doing it, they’re going to give NASCAR gimmicks a good name.

As for an actual gimmick

It was somewhat amusing to see some diehard IndyCar fans point out that Busch was now ahead of Graham Rahal in points after the Indy 500. Essentially, the message was offered as a slam of the struggling, and becoming-increasing-less popular Rahal, who finished 33rd Sunday after encountering electrical problems.

I concede Busch being ahead in the standings is telling of the miserable season Rahal is having. Still, my overriding take away from the fact Busch is ahead of Rahal in the championship standings, is more an indictment of the silly double-points system, and ridiculous number of points awarded for Indy qualifying than an indictment of Rahal.

Because stated another way, Busch, who has one sixth place finish is only 13 points behind Mike Conway, who has actually won a race, in the championship.

Yes, if IndyCar fans want to make accusations of gimmicks, well, they don’t need to look too far beyond their own sport.

Speaking of the championship

It was believed that Simon Pagenaud had established himself as a championship contender with his win in the Grand Prix of Indianapolis. I would offer that the Frenchman showed during the Indy 500 why that isn’t the case.

While the #77 Schmidt Peterson Motorsports car experienced tire blistering, keep in mind Pagenaud has never finished better than fifth on an oval. And with the new “double-points," will hurt Pagenaud relative to Dixon, RHR, Castroneves, and….

Expect Will Power to be stronger in the next few races. With the Indy 500 win, Hunter-Reay moved atop the championship standings. However, Power always seems to perform better when he is chasing rather than being chased.

One thing that may hold back a Power assault is Honda’s strength. While Chevrolet had the performance advantage at St. Pete, keep in mind Honda has really been the engine to beat since Long Beach. And if not for the multi-car accident involving 4 Hondas, a podium sweep was in the cards for the Japanese marque.

I don’t want come off as sanctimonious but…

Look, I have attended many events as a paying customer (concert, sporting events, etc.) that showcased humanity in a less-than-stellar light. And while I consider myself a responsible adult, I’ll likewise admit I am not what one call prudish, when it comes to enjoying a stiff adult beverage or two.

That said, the level of drunken, obnoxious, and at times, aggressive behavior I witnessed personally throughout the weekend at the Indianapolis Motor Speedway was reprehensible. Granted, many people were simply enjoying race cars, music, pretty people, a few drinks, etc. However, far too many went far beyond that, as 211 arrests throughout the weekend, and two shootings would attest. And those numbers don’t even begin to measure people barfing in the infield, stumbling into cars, and in general making, abject messes of themselves.

While I could go on about this ad nauseam, I’ll just say this. If I was not a credentialed media-member, and did not have the luxuries and comforts media enjoy, I would be hesitant to attend the Indianapolis 500 as a spectator. I certainly would not expose my children to what I witnessed this weekend.