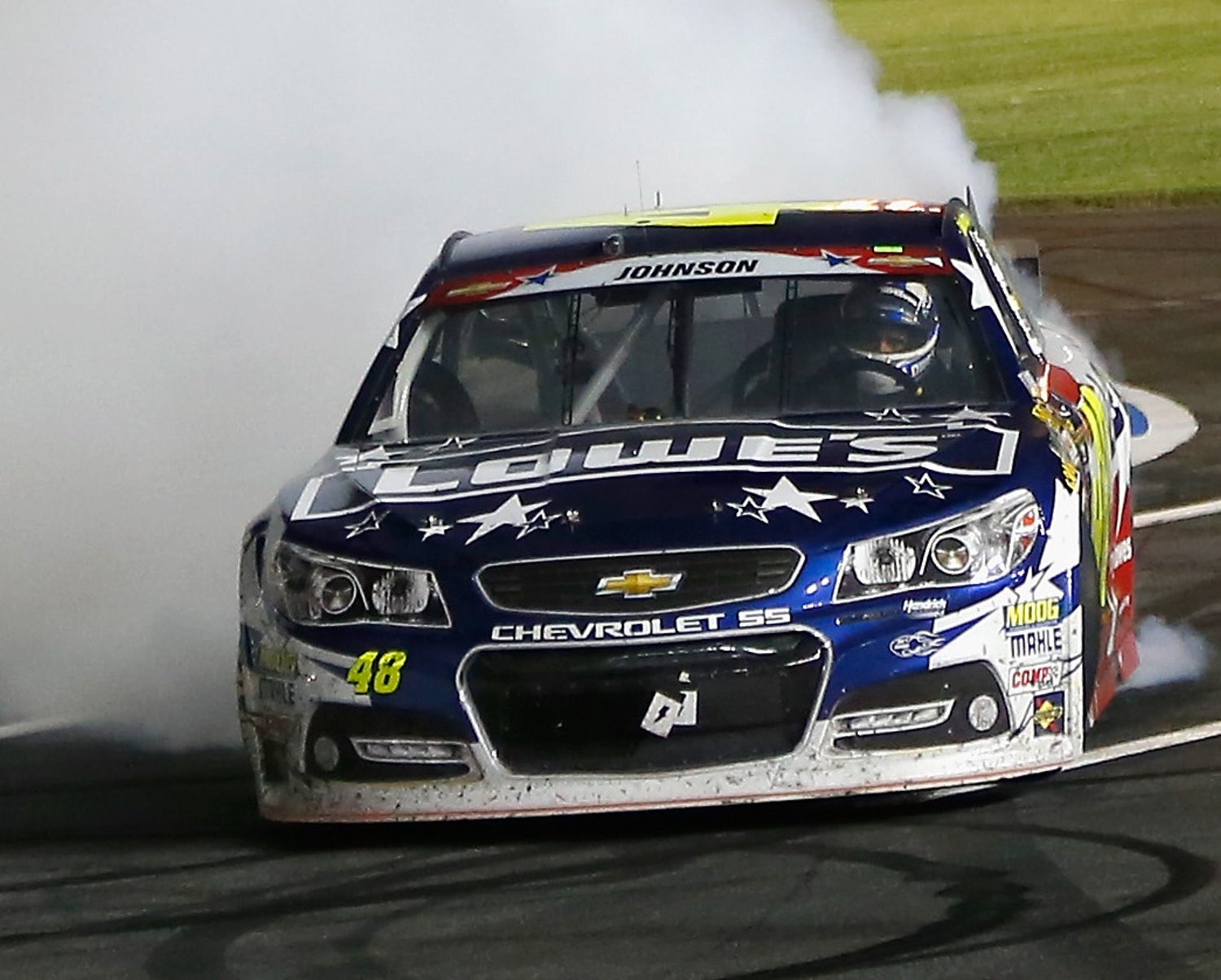 Jimmie Johnson finally broke through with his first victory of the season, winning Sunday night’s Coca Cola 600 to collect his fourth win in NASCAR’s longest race.

Johnson edged his way past Matt Kenseth with eight laps to go and handily cruised to the finish by 1.2 seconds over Kevin Harvick.

Johnson’s victory was the 67th of his Sprint Cup career and his seventh victory at Charlotte Motor Speedway, breaking a tie with NASCAR Hall of Fame drivers Bobby Allison and Darrell Waltrip for the most all time.

"It's great to win, but believe me – and I promise you – all the hype and all the concern and worry, that was elsewhere. That wasn't in my head; there are plenty of voices in my head, I'm not going to lie," said Johnson. “We've had great races and we've had opportunities there in front us and had stuff taken away. And we've had bad races; I have to be honest about that too

After coming into Sunday night’s race without a victory to guarantee him a slot in the season-ending Chase for the Sprint Cup, Johnson finally silenced the critics who raised concern that Johnson might miss out on the championship battle.

“What the hell are you all going to write about now? We won," Johnson asked the media following the win. “I mean, what, 12 races? Give me a break. Granted, tonight simplifies things. We'll take it, move on. We really want to heat up and win races later in the season, especially before the Chase starts. More than anything, I just got tired of answering the question."

Johnson not only secured a shot at a record-tying seventh Sprint Cup title, he’s also put the rest of the competition on notice that the no. 48 team is back in the hunt.

“They know we're awake. In winning, it doesn't matter who you are. The No. 4 (Harvick) car has had that momentum this year. They've been able to go out and execute and show a lot of speed and win. Hopefully this 48 is heading that way and we can get those other people thinking about us."

There was once a time when Johnson and his team owned Charlotte, posting a staggering eight-straight top-five finishes including back-to-back Coca-Cola 600 victories in 2004 and 2005, however in his last six starts in this event, he’s managed only two top-15 finishes along with two DNF’s.

After winning the pole for the event on Thursday, it seemed like the stars had aligned for Johnson.

Johnson led a race-high 164 laps, including 72 of the first 76 laps, and very faded farther than the top 10 for most of the race.

But as the race came down to the final 75 laps, it looked to be shaping up as a fuel-mileage scenario, with several drivers, including Edwards and Paul Menard, pitting off-sequence with 55 laps to go.

When the rest of the field came around for their final pit stops with 30 to go – including Johnson, Kenseth, Harvick and Gordon – Edwards found himself back out in front with enough fuel to leg it out to the finish, but a final, late caution flag for Alex Bowman hitting the wall with 20 laps to go changed all that.

With the fuel strategy out the window, Edwards pitted, handing the lead over to Jeff Gordon, who stayed out along with Kenseth and Johnson.

On the restart, Kenseth – with four fresh tires to Gordon’s two – powered past to take the lead, opening up a one-second lead over Johnson.

With eight laps to go, Johnson had reeled in Kenseth went to the low side on the back stretch looking for the lead. Kenseth threw the block, but Johnson push the nose of his Chevrolet SS under Kenseth’s Toyota Camry and moved past on the low side to take the lead.

Once out in front, Johnson was history, moving out to a 1.2-second lead over Kenseth, who faded to a third-place to post his seventh top-10 finish in the last eight races.

“Everything kind of fell into place with us with that caution, people being under fuel strategy – everything fell into our lap," said Kenseth. “Got a good restart, got out front. Unfortunately didn't have enough speed to hold off Jimmie and Kevin and hang on to win. I thought we had a top-five car all night. Great pit stops, great adjustments. Just couldn't hang on to it at the end."

Harvick rallied from a loose wheel early in the race to pull out a runner-up finish, moving past Kenseth for second on the final lap, but still vented his frustration over another missed opportunity.

"We shot ourselves in the foot again," said Harvick. “We left two wheels loose and played catch up the rest of the night. We're just shooting ourselves in the foot on pit road. We have to clean that up because we obviously can't win races with the fastest car if we make mistakes continuously on pit road. It's frustrating but everyone on this Budweiser Chevrolet has done a great job."

Kurt Busch, who finished sixth in the Indianapolis 500 earlier in the day, came up short in his to bid pull off the Indy-Charlotte double after the engine expired in his no. 41 Chevrolet on lap 271, ending with a 40th-place finish.

“It was really a lot of fun. It was a dream come true to run at Indy and post a really good finish there. I can't let what happened down here dampen the mood," said Busch. “Today is a memory I’ll have forever. It was a challenge I put forth for myself. I enjoyed it. “The mood down here we’re not going to let it dampen things. There is still wind in our sails and we’ll still sail on off into the sunset after today."

Brian Vickers came home in the sixth position ahead of Jeff Gordon, who retains the points lead by 11 points over Kenseth. Paul Menard, Kyle Busch and Brad Keselowski rounded out the top 10.

WELCOME BACK TO VICTORY LANE THE LONG NIGHTMARE IS OVER:
“There are more people fretting about things than myself. I mean what 12 races? Give me a break. Obviously it’s great to win and we are very happy to win here especially in the backyard of Hendrick Motorsports, Lowe’s headquarters is just up the road as well. A huge night, all the executives from Lowe’s are here. I can’t wait to have a cold beverage with those guys. Just stoked for the night. Very good race car. We raced up front all night long and that last restart let us bunch up to those guys on two (tires) and our four (tires) were able to prevail."

WAS THERE A POINT YOU WERE CONCERNED YOU WOULD NOT BE ABLE TO CATCH (MATT) KENSETH?
“I wasn’t sure what was going to happen. Chad (Knaus) made me think I could get to the No. 24, but the No. 99 was up there and that is who he was afraid on the radio I wouldn’t be able to run down. Sure enough we were able to catch a caution and I think the No. 27 and No. 99 had to pit. When the No. 20 got away I thought ‘man I’m not going to be able to run him down.’ I saw him missing the bottom tight in (Turns) 3 and 4 and I thought ‘okay I’ve got a little something for him.’ And was able to get by with a few laps to go."

YOU NOW HAVE MORE CUP WINS AT CHARLOTTE THAN ANYBODY ELSE – 7 – HOW ABOUT THAT?
“That is amazing. That is very cool. This is no easy race track to get around and to beat the greats that were before me I’m very proud of that."

ON HIS RACE:
"It's great to win, but believe me – and I promise you – all the hype and all the concern and worry, that was elsewhere. That wasn't in my head; there are plenty of voices in my head, I'm not going to lie! We've had great races and we've had opportunities there in front us and had stuff taken away. And we've had bad races; I have to be honest about that too. I'm so proud of this Hendrick Motorsports-prepared race car, Chad Knaus and the leadership of this race team, and the great, great support from Lowe's and KOBALT Tools. And do this on Memorial Day… just thank you to all the men and women who served our country."

WHAT WAS THE KEY TONIGHT?
"It was such a long race and so many things going on. The track went in a little bit different direction than I thought it would from a handling setup. Once we got on top of that, we were real competitive. I really think clean air on those restarts were key. I was happy to get by the No. 24 and then the No. 20. I wasn't sure I was going to get by both of them, but I did and brought this baby home."

WILL PEOPLE START TO FEAR THE NO. 48 AGAIN?
"Yeah, they know we're awake. In winning, it doesn't matter who you are. The No. 4 car has had that momentum this year. They've been able to go out and execute and show a lot of speed and win. Hopefully this 48 is heading that way and we can get those other people thinking about us."