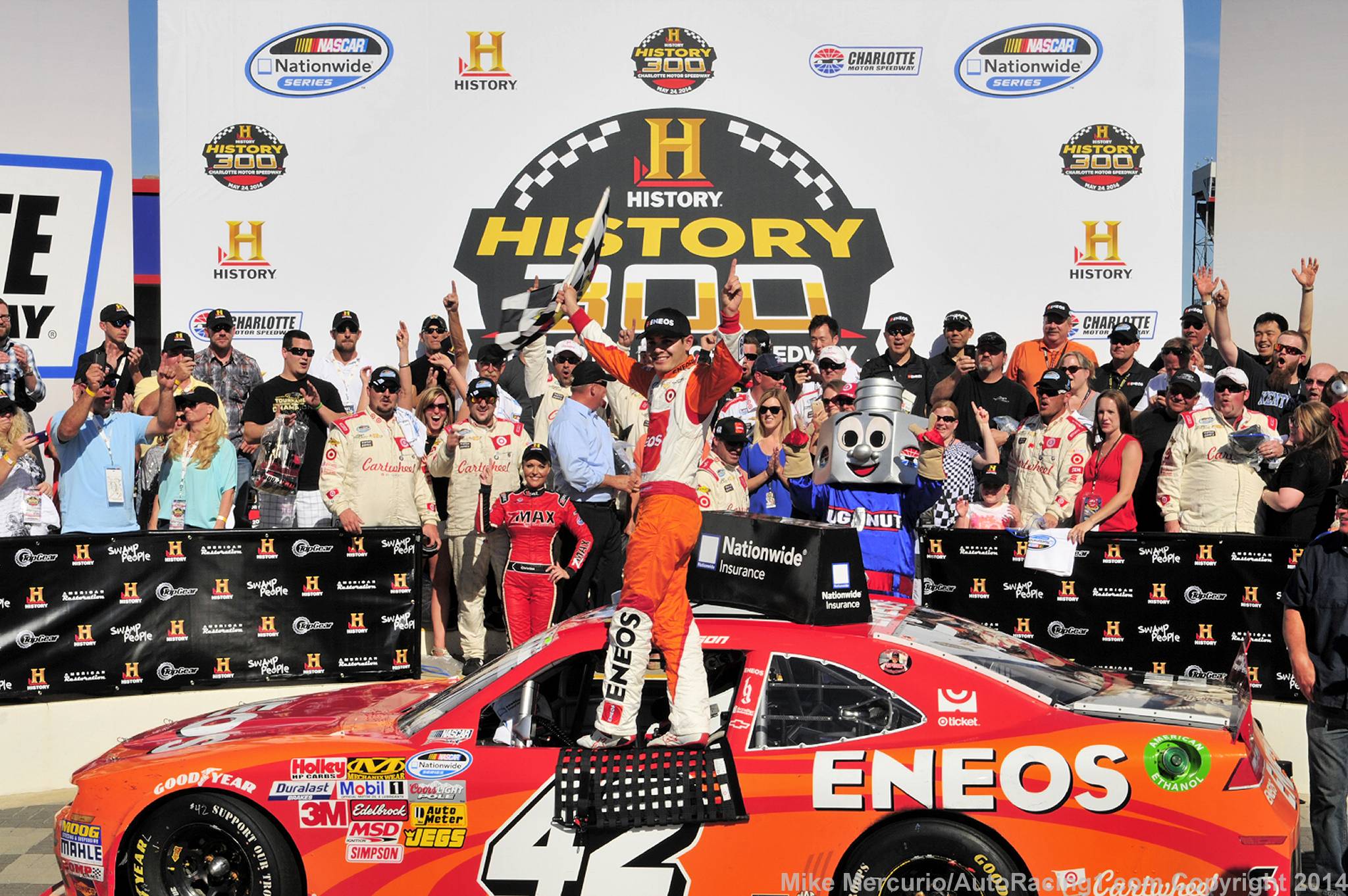 Kyle Larson pulled off a veteran move on a veteran driver to score a dominating victory for his second-career NASCAR Nationwide Series races with a victory in Saturday’s History 300 at Charlotte Motor Speedway.

Larson took the lead with a bold three-wide pass on the outside of turn four over Brad Keselowski on lap 118, and led a career-high 82 of the remaining 83 laps, holding off Kevin Harvick and Brad Keselowski on a late restart to race to the finish by nearly one-and-a-half seconds over Keselowski for the victory.

The victory was Larson’s second in his sophomore season in the Nationwide Series, his first win coming at Auto Club Speedway in his native California on March 22.

“This was about perfect for us. We were pretty dominant for the last half of the race," said Larson. “I knew if we could get the lead and have some long green-flag runs we’d be pretty tough to beat and that’s kind of how it when for us.

“The last restart, I was kind of nervous with (Kevin) Harvick to my outside and Brad (Keselowski) and Kyle (Busch) were behind me. Those are probably thereof the best on late restarts, I wasn’t sure I was going to even be able to clear them of (turn) two. Just knew I had to hit my marks and stay calm and it seemed like there were getting smaller and smaller in the rear-view mirror, and that’s a good sight. That was a great race for us. Perfect race for our whole team."

Larson, a Sprint Cup Series rookie whose talent has won considerable praise from Sprint Cup veterans such as Tony Stewart and Jeff Gordon, showed that he’s not afraid to mix it up with the big boys on the track, in the past tangling with Busch and Ryan Newman in the Nationwide and Camping World Truck Series.

This time, he took down Keselowski with a heart-stopping three-wide pass just past the half-way point of the race, splitting the lapped car of Chris Cockrum and then pinning Keselowski behind a slower Josh Wise to sling-shot past to the lead.

“I ran the top here in the second Charlotte race last year, so I knew it was fast," said Keselowski. “I knew if I could catch Brad (Keselowski) in a bad spot in traffic I could use that to my advantage and that’s kind of what happened.

“I saw a lot of lapped traffic in front of us and (Keselowski) had yet to try the top, and he got kind of hung up behind them and it was a clear lane up above, and maybe didn’t look that clear on TV but there was quite a bit of room up there for me. It was a pretty awesome move because we were closing in on him a lot in just a lap and was able to get by and get away, so that was kind of the move of the race for us."

Once out in front, Larson opened up a lead of more than two seconds, slowed only by a final debris caution with 26 laps to go.

Back under green, Larson pulled away over Kevin Harvick, who faded back to as Keselowski and Busch moved past into second and third.

Keselowski managed to hold off Busch and pick up the runner-up spot, but had nothing for Larson in the final laps.

“We had a good run, but just came up a little bit short," said Keselowski. “The 42 car (Larson) was very strong at the end and we just didn’t have quite enough to run with him. We led laps and ran in the top three all day, so that’s a solid effort but not the win we’re looking for, but still nothing to shake your fist at."

“He (Larson) had a fast car. That’s just the reality of it. He had a fast car that was very versatile and could run the top and the bottom. That’s what you dream for as a driver. That makes your life a lot easier and he did a great job of making the most of that."

Busch’s third-place finish capped a tumultuous 48 hours for the defending race winner, which saw him hit the wall in the Nationwide Series practice on Thursday, then taking the pole on Saturday morning, and then wrecking his primary Sprint Cup car in practice less than an hour later – sending him to the rear of the field for the Coca-Cola 600 in a back-up car.

Starting from the pole in the History 300, Busch led all but one of the opening 29 laps but struggled all day with a loose race car.

Although his crew made some adjustments and got him back up to third in the closing laps, Busch was never able to make up any ground on Larson.

“A little disappointed. Thought we were better than that, but apparently we’re not," said Busch. “We need practice. Just wrecking loose all day out on the race track – no grip. You just can’t pass – you can’t go anywhere. The race today was just all around the bottom. There’s no speed anywhere else – you couldn’t get anything going on.

“We struggled real bad and come home with a third. All things considered, we should be happy, but we’re only here for wins – nothing else matters."

Rookie Chase Elliott, who came into Saturday’s race as the Nationwide Series points lead, ran into trouble after smacking the outside wall on lap 87, sending him to the garage and a 37th-place finish and dropping him to third in points. Smith takes over as points leader by five points over Elliott Sadler.