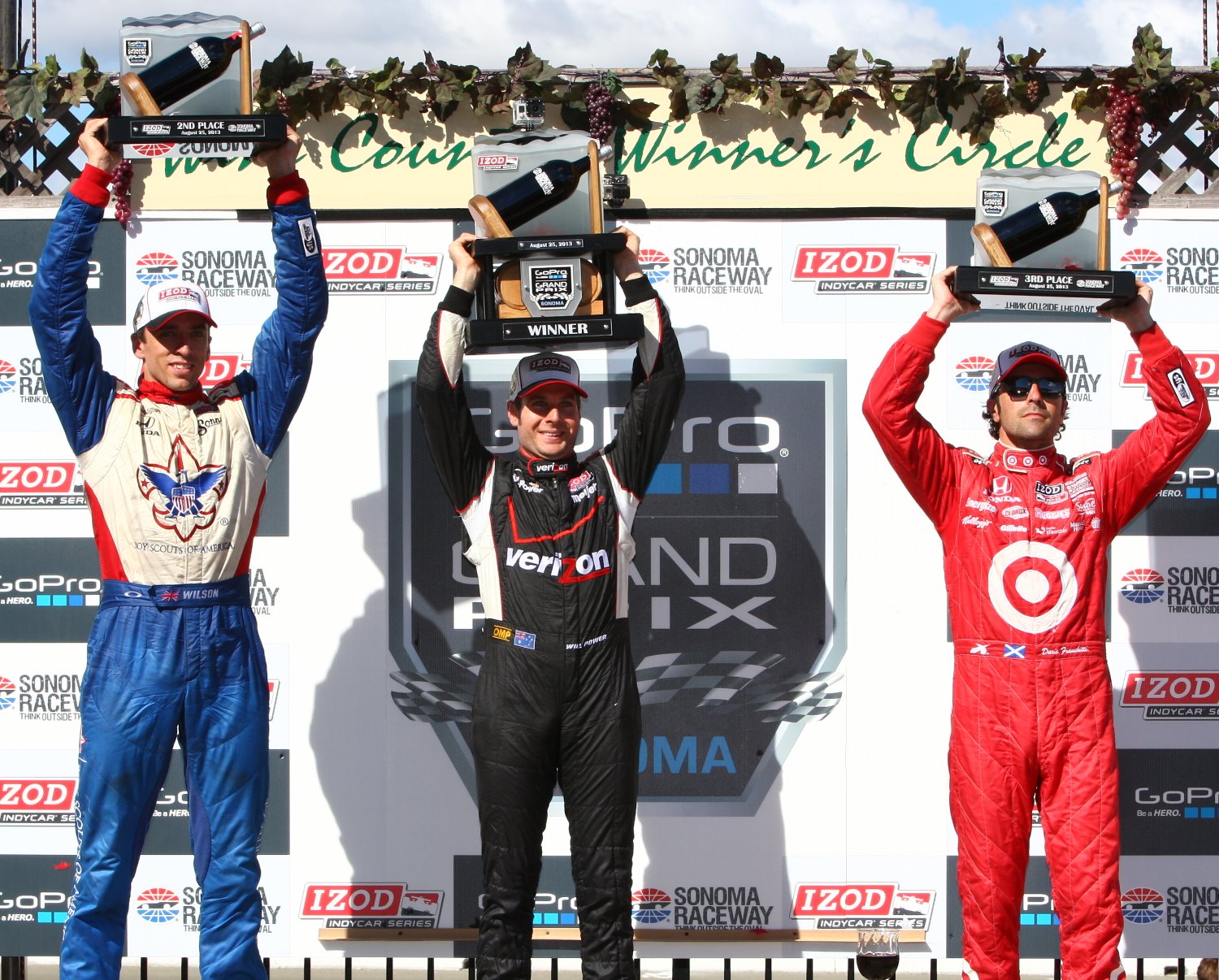 The Verizon IndyCar Series will make its annual pilgrimage to the Sonoma wine country this coming weekend for the 10th consecutive season with the Go Pro Grand Prix of Sonoma. It will be the 11th time an American Open Wheel Racing championship event has been held at Sonoma Raceway.

Aside from the current stretch of races, which began in 2005, there was the USAC-sanctioned 1970 Golden Gate 150 won by Dan Gurney in an Eagle Ford. Mario Andretti driving a Brawner Hawk Ford came home second with Al Unser rounding out the top-3 in a Colt Ford. The pole sitter for that race was Mark Donohue who retired his Lola Chevy before even completing one lap with a broken valve train.

Last year, Team Penske’s Will Power won a rather memorable race, in which late-race leader Scott Dixon was penalized for making contact with one of Power’s crewmen. Dixon made his displeasure with the matter very well-known, referring to the crewman’s apparent blasé effort to get out of his was as a “d*** move."

Whatever the case, the penalty dropped Dixon out of contention for the win and elevated Power to the top of the order. The Aussie went on to score his third Sonoma victory in 4 races, and fourth in a row for Team Penske. Dale Coyne Racing’s Justin Wilson was second, with Target Chip Ganassi Racing’s Dario Franchitti fourth.

Other than Power who runs well at Sonoma?

Yes, Power stands alone with 3 victories at the picturesque Northern California track, and along with Franchitti has 3 pole positions at Sonoma. NTT Data Chip Ganassi Racing’s Ryan Briscoe won the race in 2012, has finished second twice, third once, and started on pole in 2005. Team Penske’s Helio Castroneves won the 2008 race from pole. Castroneves also has finished second twice, including the 2011 race, when he was part of a Penske 1-2-3 finish with Power winning and Briscoe third.

Dixon won the 2007 race, and has also scored one pole and one second. Tony Kanaan won in 2005, and has one third-place finish. Marco Andretti won in 2006.

Wilson and Mike Conway, who finished third in 2009 are the only other drivers in this year’s field to have registered a podium finish at Sonoma.

Sonoma has been all Penske, Ganassi, and Andretti. Since 2005, the three teams boast every win and every pole position at the track since 2005.

Penske leads the way with 5 wins, while Ganassi and Andretti have two each.

Also since 2005, the three teams have recorded, 22 of the 27 podium finishes. Only two other teams entered this weekend have also recorded a podium at Sonoma. Buddy Rice finished second for what was then known Rahal Letterman Racing in 2005, and as previously mentioned Wilson finished second last year for DCR.

Yes, if history is any indication Sonoma is a playground for IndyCar’s elite.

Is there anyone with a particularly unexceptional record at Sonoma?

I wouldn’t call this unexceptional, but given his record elsewhere Sonoma has not been a favorite track of Ryan Hunter-Reay. The 2012 series champion has no finish better than 6th in 7 starts.

But the award for least impressive record at Sonoma? That goes to Sarah Fisher Hartman Racing’s Josef Newgarden. As one of 22 cars expected to take the green flag this weekend, merely starting the race means Newgarden will improve upon his best Sonoma result of 23rd in two starts.

How important is qualifying at Sonoma?

Three weeks ago, I told you that there were few tracks where qualifying was more important than Mid-Ohio. That was of course, before Dixon went out and won from the 22nd and last position.

That said, at the risk of making myself look silly again, the numbers indicates qualifying position is more important at Sonoma than Mid-Ohio. The race has been won 4 times from pole, six times from the front row, only once from outside the top-3, and never from a deeper grid position than fifth. Even going back to that 1970, Gurney won from the third grid position.

Other than some of the obvious are there drivers, who may contend for the win?

The two that immediately come to mind are Newgarden and Sebastien Bourdais.

Newgarden qualified second at Mid-Ohio and had a legitimate chance of scoring his first career victory before a pit road miscue on his final stop. Newgarden also turned in an impressive drive this past weekend at Milwaukee.

As for Bourdais, he sat on pole at Mid-Ohio, and finished second to Dixon. This, of course, came after he won Race 1 in Toronto from pole. And you might remember the KVSH Racing driver had quite a drive going two years ago before he and Newgarden tangled on the backstretch at Sonoma.

Both Bourdais and Newgarden should be factors Sunday.

What are some of the storylines coming into the weekend?

The major storyline is the series championship.

How will the Team Penske duo of championship leader Power and second-place Castroneves perform relative to each other and the other contenders. As outlined earlier this week on AR1, Power can eliminate all other contenders but Castroneves with a strong performance this week.

Of course, Power has a history or coming up short down the stretch in championship runs. The Aussie has long shown himself to be better in the role of hunter. How will he respond this weekend now that he once again has a lead to protect?

Remember, the last two times the series has had a qualifying session on a road/street course, Bourdais has secured pole position. The Frenchman was dominant in the first race at Toronto and was a contender to win at Mid-Ohio, where he finished second. He also had a very strong drive going two years ago at Sonoma before a coming together with Newgarden.

Look for a Bourdais win this weekend at Sonoma.