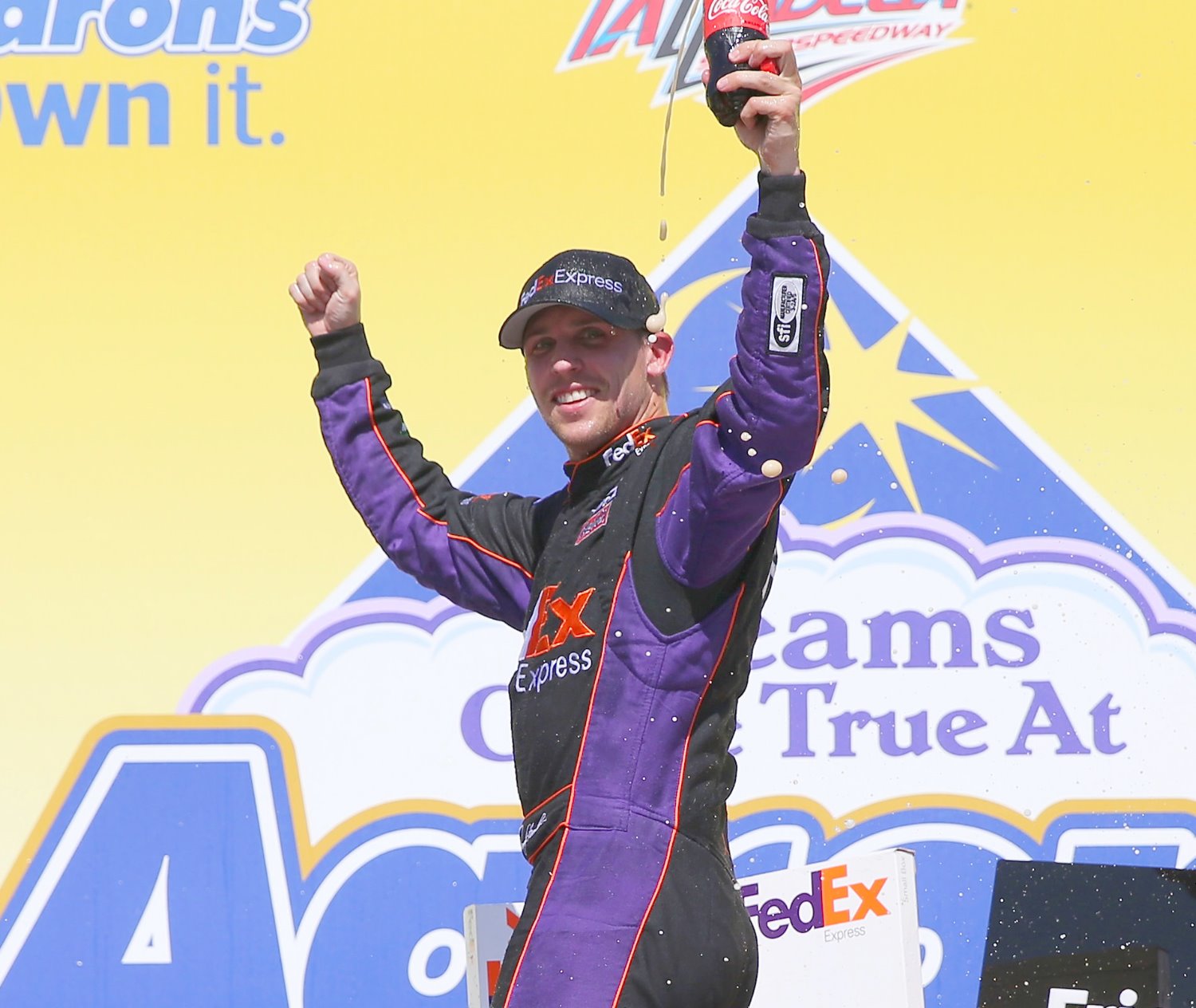 Denny Hamlin won for the first time this season, holding off Greg Biffle to claim Sunday's Aaron's 499 at Talladega Superspeedway under caution.

Since placing second in the season-opening Daytona 500, Hamlin had just one other top-10 finish (sixth at Bristol) in the first nine Sprint Cup Series races of the year.

"We really just want to win races — regardless of what implications this means for the Chase, it feels good to be back in Victory Lane in a points-paying event," Hamlin said. "I'm still a short track guy. Those are my roots, that's where I love racing the most, but we've come a long way."

After starting 35th, Biffle forged his way to the front on Lap 57 and led a race-high 58 laps.

"I was backing up off (Hamlin) quite a bit on the backstretch and I got probably two-and-a-half, three cars away from him and they said, 'caution is out,' " Biffle said. "I was setting up to go by him, but just never had the chance. I wish I had known we weren't gonna race all the way back, but it was a good day for us. The car was really fast, a lot of speed, and I'm just happy to come out of here with a clean car."

Logano was towed to the garage after being collected by a wreck on the 175th lap involving Jimmie Johnson and Ricky Stenhouse Jr. Kurt Busch, David Ragan, Michael McDowell and Reed Sorenson were also involved.

Early in the day, a three-wide battle for the lead resulted in Brad Keselowski wrecking onto the apron after a nudge from the No. 10 of Danica Patrick.

Keselowski found a line in the middle and had just pulled ahead of Patrick past the start/finish line. He attempted to maneuver his No. 2 Ford into the low line heading into Turn 1 when the two cars made contact, sending Keselowski spinning wildly onto the oversized apron and bringing out the caution on Lap 14.

Keselowski's car also touched off a 14-car wreck with 50 laps to go in the race. Frontrunners Jeff Gordon, Matt Kenseth, Kyle Busch, Tony Stewart and pole-winner Brian Scott were among the drivers collected.

"I just spun out in front of the whole field," Keselowski said. "I don't know why, if I just busted my butt on my own or lost a tire, but I feel bad for everyone that got torn up."

Caution also waved for an incident involving Justin Allgaier on Lap 187 of 188, but since Hamlin had crossed the start-finish line entering Lap 188, he was declared the winner.

The Sprint Cup Series returns to the track Saturday night for the 5-Hour Energy 400 at Kansas Speedway.

DENNY HAMLIN, No. 11 FedEx Express Toyota Camry, Joe Gibbs Racing
Finishing Position: 1st
Does this win mean more considering it should secure you a place in this year’s Chase?
“We really just want to win races — regardless of what implications this means for the Chase, it feels good to be back in victory lane in a points paying event anyway. Couldn’t do it without this FedEx team — my pit crew has done an awesome job. They picked me up no less than 10 spots every single week and they did it again today. It just strategically saw that things were getting a little heavy there in the middle part of the race and those guys got in a wreck and we were able to avoid that and just play our cards right there and make the right strategy. Proud of this whole FedEx team — can’t thank FedEx enough and Coke, Sprint, the Jordan brand, Toyota and the fans. This was the biggest crowd I’ve seen here in many, many years so proud of the whole fan turnout and just proud of our day today."

Are you becoming more of superspeedway racer?
“I’m still a short track guy. Those are my roots, that’s where I love racing the most, but we’ve come a long way. I said that over the radio to Darian (Grubb, crew chief). We couldn’t finish 22nd at a superspeedway race for the longest time and now it seems like when we go we know we’ve got the knowledge and car that can win. It feels good to come to these types of race tracks and know you can win."

Did you feel confident being in the bottom lane for the final restart?
“We knew we were in a good spot to get a victory and it was a just a matter of which line was going to get the push — was it going to be the outside or inside. I thought my best chance was to stay on the inside, but usually the outside lane gets jumbled up with guys trying to stick it three-wide. I chose the bottom and it was the right decision."

What was your spotter telling you about the accident on the final lap?
“I knew that there was a wreck somewhere around the start-finish line and I knew that we had to just keep in it. NASCAR did a good job of just letting the race play out as long as it was able to safely. Applaud them for that. We went all the way through three and four really ran three-quarters of a lap extra after the wreck happened. It gave everyone a chance to improve their position."

Was the racing crazy today?
“Yeah, it was. These cars are just so hard to pass believe it or not that you get bottled up, you get where you can’t make any moves. You have to be in those top-two lines to do anything. I knew once we were in the top three in those last 20 laps that we were going to be in good shape."

How does it feel to get your first points superspeedway win?
“It feels great. I’ve got tons of exhibition wins on superspeedways, but none with points. I like it."