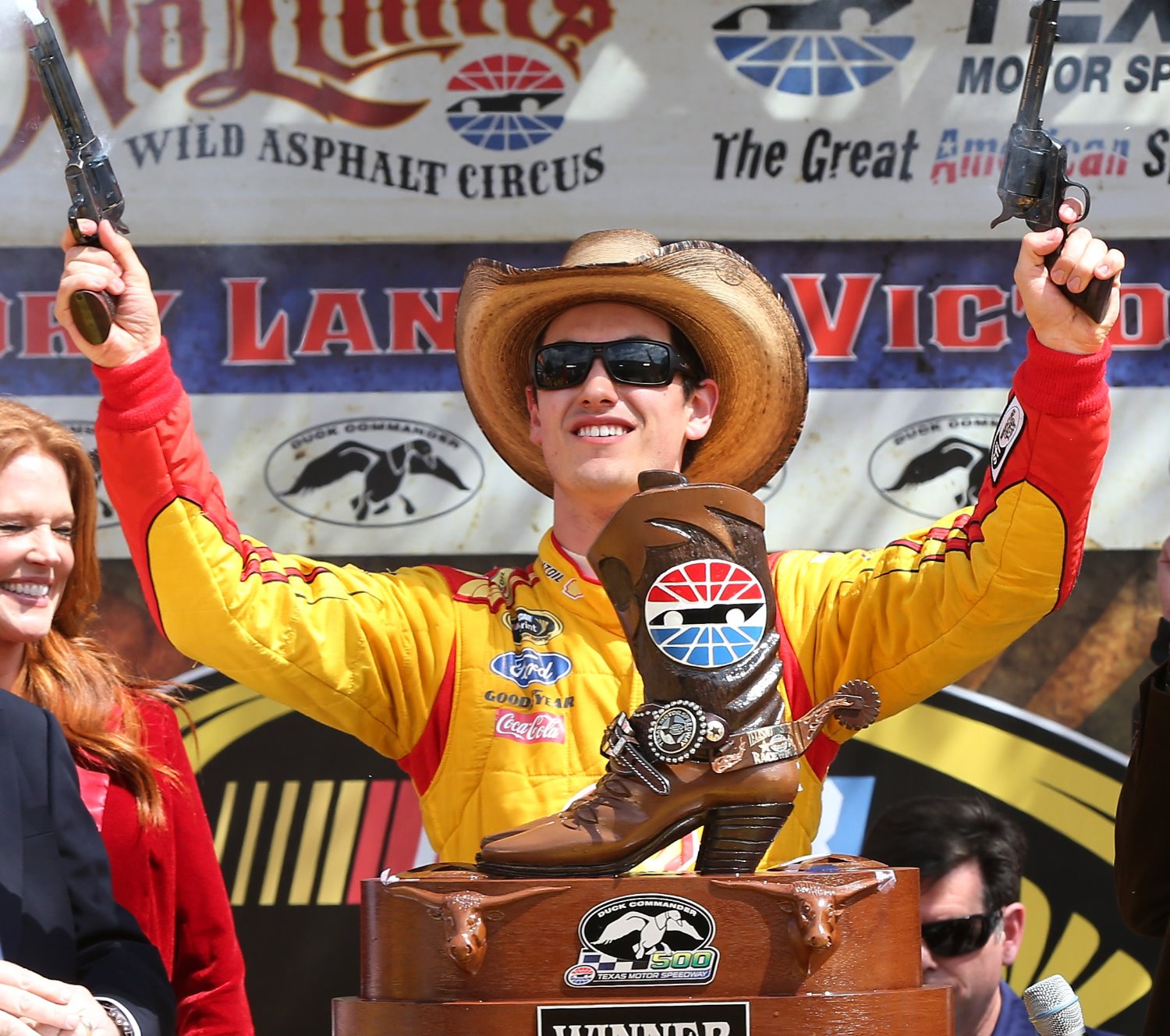 Joey Logano's "Final Four" at Texas Motor Speedway had nothing to do with the NCAA Men's Basketball Championship set for Monday night in nearby Arlington.

"We've been in contention every race this year to win, and I'm proud to be a part of that," said Logano, who extended a streak that has produced seven different winners in as many Sprint Cup races. "I felt very confident about this race. For some reason, I told Todd, I said, 'We're going to win this week,' and I was mad when we didn't get the pole. But I felt like we had a car that could win today."

Logano, 23, scored his first career victory on the 1.5-mile quad-oval and fourth in 190 career Sprint Cup starts at the expense of four-time series champion Jeff Gordon under a green-white-checkered-flag finish that extended the race to 340 laps from the originally scheduled 334.

Logano, driver of the No. 22 Shell Pennzoil/Hertz Ford Fusion, passed Gordon via a crossover move on the inside heading into Turn 1 on Lap 340 en route to margin of victory of 0.476 seconds. Kyle Busch finished third with Brian Vickers and Sunoco Rookie of the Year candidate Kyle Larson rounding out a top five that was shuffled by the day's seventh and final caution on Lap 333.

Logano was working on a 3.053-second lead over teammate Brad Keselowski when Kurt Busch, winner of last week's race at Martinsville Speedway, brushed the outside wall in Turn 2. During the ensuing pit stops, Logano and Keselowski opted for four tires and fuel. Gordon, of Hendrick Motorsports, and Vickers, of Michael Waltrip Racing, opted for right-side rubber only and exited pit road 1-2.

"When you've got 40-something laps after the last pit stop and a pretty sizeable lead, really, all you're thinking is, 'Where's the white flag?'" Logano said. "Brad was able to catch us a little bit and then you go into Turn 1 and see the No. 41 (of Kurt Busch) up against the wall and you're like, 'Please, no caution.' And, of course — boom — it comes out and you're like, 'You've got to be kidding me.' So you get so mad that you can barely control yourself. Really, I was just so mad.

"And then he (Todd Gordon) made a last-minute decision to put fuel in it, gave me better balance for what I needed and the guys made the 'money stop.' I was the first guy out with four tires on."

Similarly, Gordon praised crew chief Alan Gustafson for a "great call" to go with two tires on the final stop given his standing when the yellow flew. "I mean, coming in sixth, you're in that position that you can gamble," said Gordon, driver of the No. 24 Axalta/Texas A&M School of Engineering Chevrolet SS. "You're not going to win it with four (tires),you're not going to win it with none. I knew it was going to be hard to hold those guys off.

"I got a pretty good restart, so I was happy about that. Got through (Turns) 1 and 2. I was shocked I was leading off of 2, to be honest. I wish I would have run a little bit higher down (Turns) 3 and 4. I'm sure Joey was going to go wherever I didn't. Probably would have been a little bit better off on the top. He crossed over and got into the back of me pretty good. At that point I was just thinking, 'I want to finish.' Looked out my mirror, those guys were racing hard behind me. A great second-place finish for me."

Kyle Busch, winner of this event last year, said he was looking at solid third-place results before the final sequence. "Of course, the inevitable comes out with the yellow and you have to come down and get tires — just way too long out there on tires," said Busch, driver of the No. 18 Interstate Batteries Toyota Camry fielded by Joe Gibbs Racing. "I chose four just because I absolutely killed my stuff about three laps prior to that caution coming out so I knew that was our only chance. Just drove the hell out of it there those last two laps and got all she could and come home third. Good, deserving finish for us here."

Keselowski was poised to give team owner Roger Penske a slam-dunk 1-2 finish behind his teammate when the final caution flew. Keselowski exited the pits fourth with four tires, one spot behind Logano. But he was charged with speeding off pit road — a miscue that dropped him to 15th.

"That last caution was a shame," said Keselowski, driver of the No. 2 Miller Lite Ford. "I was just trying to get a little too much on pit road and wanted to get us out front to be able to win the race and tried a little too hard. We're in it for wins. We're not in it for finishing second."

Gordon emerged as the new points leader after HMS teammate Dale Earnhardt Jr. crashed out of the event on Lap 12, finished 43rd and dropped to sixth in the standings. Gordon holds a four-point (259-255) lead over Matt Kenseth of Joe Gibbs Racing heading into Saturday night's Bojangles' Southern 500 at Darlington Raceway