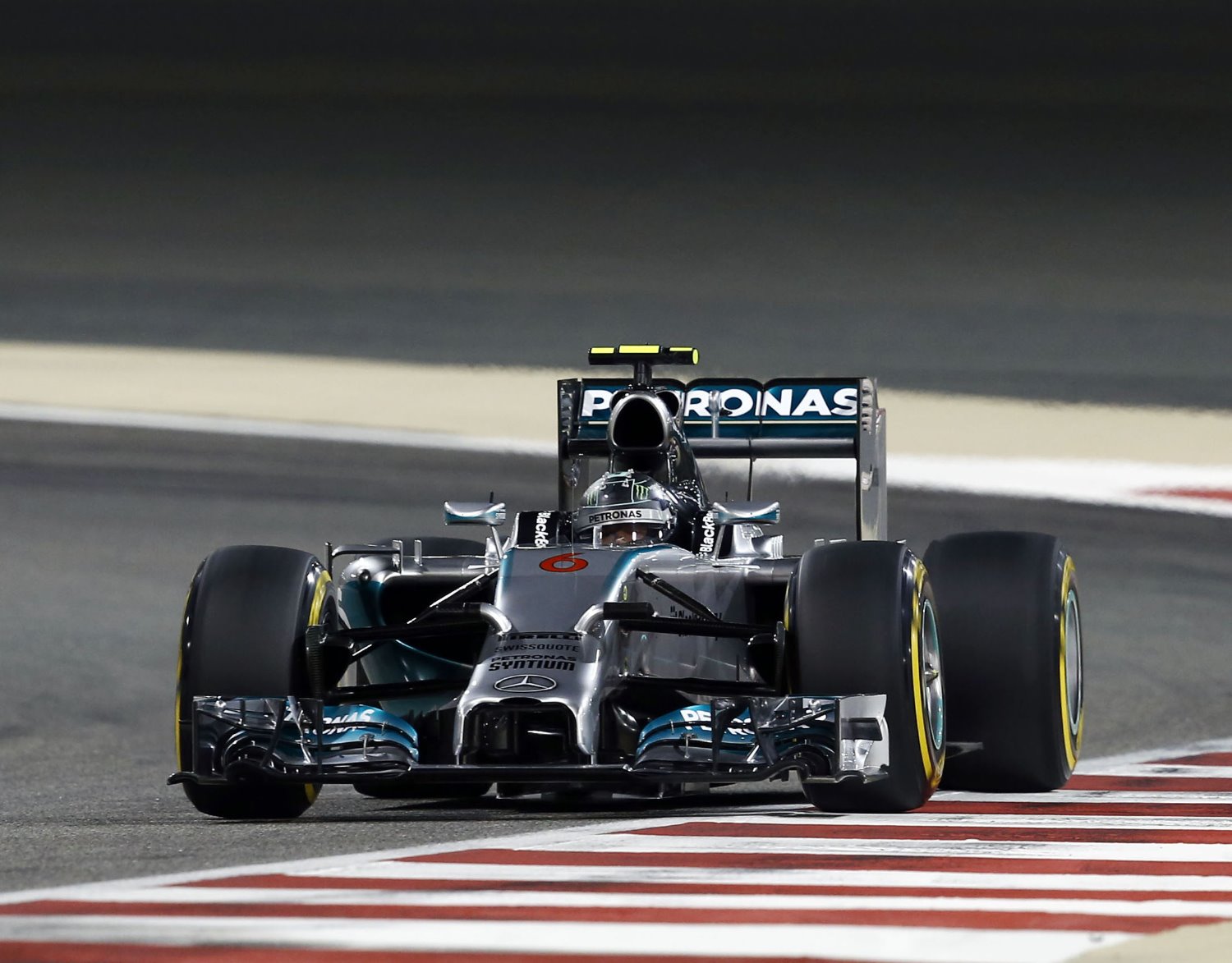 While Mercedes powered cars dominated the top-10, it's clear the Mercedes team is giving their drivers the best versions of those power units.

No one is even close. Daniel Ricciardo did manage 3rd but faces a 10-grid penalty and will start 13th.

In Q3 with the first set of runs done and Nico Rosberg on pole, his teammate Hamilton tried to knock him off with one final attempt, but he did not get far. He went off in Turn 1 and it was over.

Sebastian Vettel had car problems with the Red Bull lemon and did not even make it out of Q2.

Fernando Alonso revealed he was struggling with a lack of power during qualifying which got worse with every lap.

The Spaniard set the slowest time of anyone in Q3 and will line-up ninth courtesy of Daniel Ricciardo's grid penalty. That leaves Alonso four spots behind Kimi Raikkonen – the first time he has been out-qualified by the Finn since they became team-mates.

"It was not a clean qualifying, unfortunately I was losing power through the whole of qualifying," the double World Champion told Sky Sports F1.

"But it is true that doing a 34.2 in Q2 then in Q3 with less fuel and better track conditions to do 34.9 is not ideal when it counts. But it is the way it is, tomorrow starting from the clean side in ninth we can still do a good race. We need a good start and a good strategy."

Alonso may be hoping to move forwards on Sunday, but he is all too aware of the threat posed from behind of Sebastian Vettel and the Force India of Nico Hulkenberg whom he battled with in Malaysia.

"I think we need to be aggressive in terms of strategy as we have not much to lose," he added.

"In ninth we are nearly out of the points so we need to improve that position and we need to recover so we will see what we can do. There are people behind who will be very strong like Vettel, like Hulkenberg etc so it is not easy. We need to look at the many cars around us and hopefully beat them."

Raikkonen's performance will serve as a timely reminder to those at Maranello that they have two World Champions in their team, but whilst happy to beat Alonso, the Finn says he has bigger goals.

Nico Rosberg
It's fantastic to be on pole again here in Bahrain. I really enjoy the track and I won my GP2 Series title here so it has some pretty special memories for me. We've had a good weekend so far and I've been able improve my pace throughout the practice sessions so I was hoping for a strong qualifying. It's so difficult to get everything completely right with all the new technology and set-up requirements on the car but I felt really comfortable this evening and was able to put some great laps together. I'm looking forward to the race as I had a good run on high fuel but we're going to need to be careful with tire degradation.

Lewis Hamilton
Second place is pretty good for us today. I made a mistake on my last lap which was a shame but it's great for the team to have both cars on the front row. They've done a fantastic job this weekend with the set-up simulations and we did a lot of testing here before the season started which has helped. The car has felt good so far but I definitely felt more comfortable in practice than I did this evening in qualifying. I'm not really sure why but we'll have a good look at the data tonight and see if there is anything we can identify before the race tomorrow. Congratulations to Nico today, he's done a great job so far this weekend and nailed a really quick lap in qualifying. I'm happy that it's my team-mate there on pole and not someone else!

Valtteri Bottas
It was a good qualifying session; I think we got the maximum potential out of the car today. After the Red Bull penalty we are third and after the last two races it's good to see the full potential of the car on a Saturday. We haven't done too many laps this weekend so there are things we can still improve for the race, but if we get the strategy right and take the opportunities that come our way we should be in for a good result.

Felipe Massa
That was not a very easy qualifying. I made a few mistakes on my lap in Q3 as I had a bit of oversteer, so lost some time and I really should have been quicker. We will start P7 tomorrow after Ricciardo's penalty and it's a long race so a lot could happen. We look competitive which is good to see, and we are in the fight for tomorrow.

Sergio Perez
"It was definitely a great qualifying session and the team did a fantastic job to give me such a competitive car. After the problems we had in the first two races I feel this has been the first real opportunity to show the potential of the car. I believe we could have been even closer to the front, but I couldn't warm up my brakes enough on the out lap of my final run in Q3 and so I didn’t improve. We're already thinking about tomorrow and I think the clear target must be to aim for the podium. We're in the best possible position to fight at the front and I’m going to make the most of it. I've got some very good memories of this track but tomorrow I want to create even better ones."

Nico Hulkenberg
“My lap in Q2 was not the best one. I made a mistake in turn 11 and ran wide on the exit curb, which completely ruined my lap. I lost a couple of tenths and that made the difference between making it into Q3 and missing out. I do believe the chance for a good result tomorrow is still there and I feel optimistic. We showed on Friday that we have good long run pace and I have two new sets of soft tires for the race. The strategy decisions for tomorrow will be important to help me move forward and with the cooler conditions it should be easier on the tires compared to Malaysia."

DANIEL RICCIARDO
"Today was nice, tomorrow will be less nice with the ten place penalty, but I was really happy with qualifying. I think through all the runs and on both tires I was happy with my performance. We may have saved one set of tires compared to the others, so that’s good, hopefully I’m going to need it tomorrow for coming through the pack; hopefully it will help us. I did the best I could today, so for that I’m pleased. I think Seb and I will both be charging hard tomorrow and will aim to put on a good race."

SEBASTIAN VETTEL
"We weren’t quick enough today. I was pretty happy yesterday, but I think this morning didn’t help us when I spun off and did some damage to the car. It’s hard to say how big the impact of that was, as once you start qualifying you just get your head down and try to do the best you can. It was quite tight with Kimi and there wasn’t a lot missing to get to Q3, but that’s how it goes. We get an extra set of tires tomorrow and I think in the race things will calm down and we’ll be able to be a bit more consistent and attack for some good points. I think our speed is okay on a longer run – and actually on a shorter run too, as Dan has shown today. It will be hard to overtake some cars tomorrow, but we will try our best."

Esteban Gutierrez (car number 21):
“I am satisfied with the result of qualifying today. We managed to put together some fast laps. I want to thank my team; they did a good job in finding the right balance from my feedback. We need to look forward and still work hard, because we are missing quite a lot of pace to be where we want to be. I have a great team and we are all working hard. Today it was the optimum I could get out of the car on my last really good lap. With the lower temperatures the tires are behaving in a different way. I feel positive for the race tomorrow, but with our pace we cannot be in the top ten at the moment. However, I am sure if we work consistently we can get some points in the future."

Adrian Sutil (car number 99):
“Today there was not much to achieve. However, making it into Q2 could have been possible. Unfortunately, we are still too slow on the straights, and I am personally struggling with the fact the car is overweight. I only had one lap, as I had traffic on my second run. This resulted in aborting my final lap. We have to concentrate on tomorrow, and we need to be better in the race. However, it will be difficult to finish in the points. We are working on the car, and I think when we get to Europe we will be able to move further up the grid. I am looking forward to that and I will put all my efforts into it."