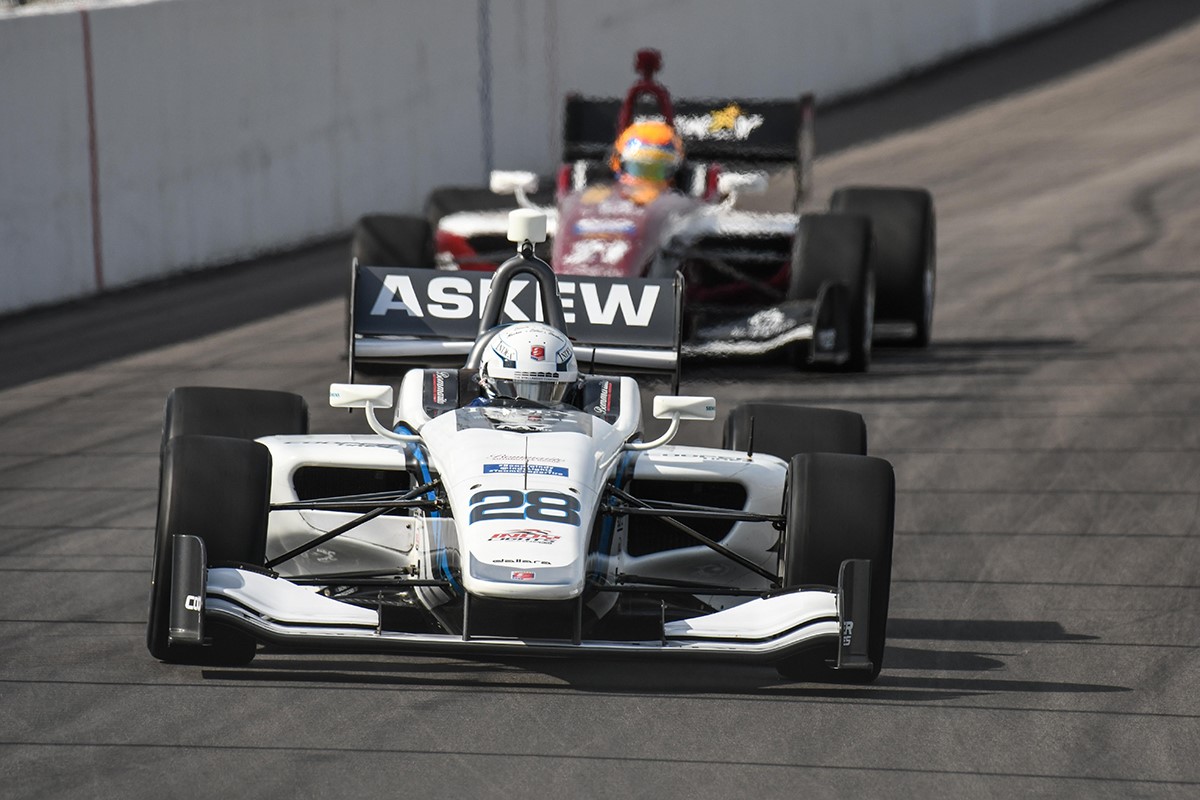 The Road to Indy is unique in the global community of auto racing, offering scholarships and awards valued at over $2.5 million to assist drivers in progressing from the grassroots to the pinnacle of the sport – in this case the NTT IndyCar Series and the Indianapolis 500.

Portland’s 12-turn, 1.964-mile road course, situated close to the confluence of the Columbia and Willamette rivers, just a few miles from downtown, always tends to provide close racing. This weekend’s Cooper Tires Grand Prix Presented by Allied Building Products will run in conjunction with the penultimate round of the NTT IndyCar Series season.

Askew Homes in on Indy Lights Crown
After a stellar career in karting, Oliver Askew made the move to cars relatively late, but since then his progress through the ranks has been nothing short of meteoric. Askew, 22, from Jupiter, Fla., gained his first major opportunity by securing a coveted Team USA Scholarship in 2016, following in the footsteps of a long line of talented young Americans over the past 30 years, including current IndyCar team owners (and former race or championship winners) Jimmy Vasser and Bryan Herta and current IndyCar points leader Josef Newgarden.

Askew then promptly aced the lucrative Mazda Road to Indy $200K USF2000 Scholarship Shootout, which he translated into victory in the 2017 Cooper Tires USF2000 Championship. He was beaten to third place in last year’s Indy Pro 2000 title chase by equally talented Dutch teenager Rinus VeeKay but he has been imperious for the Andretti Autosport team this year in Indy Lights, winning seven races, including the last four in a row, to open up a commanding 52-point advantage over Juncos Racing’s VeeKay with only four races remaining.

One more win for Askew, plus an additional bonus point either for claiming the pole position in qualifying or for leading most laps in the race, would be enough to put the title beyond VeeKay’s reach (assuming he starts each of the other three remaining races). At stake is a scholarship to guarantee entry into a minimum of three IndyCar races in 2020, including the 104th Indianapolis 500.

Both Askew and VeeKay recently enjoyed their first taste of driving an Indy car during a test session at Portland International Raceway, and should have an extra spring in their step as they chase glory this weekend.

VeeKay, 18, from Hoofddorp, Netherlands, also has enjoyed a stellar career since moving up from karting. He finished second to Askew in the 2017 USF2000 championship, then leapfrogged his rival by winning last year’s Indy Pro 2000 crown. With three wins and seven additional podium finishes to his credit during an impressive rookie season of Indy Lights, VeeKay remains one of the hottest young properties in the sport.

When the IndyCar Series and the Road to Indy returned to the Pacific Northwest last year following a lengthy absence, VeeKay claimed a couple of Indy Pro 2000 pole positions but had to be content with two second-place finishes after being edged in Race One by Askew and in Race Two by fellow teenager David Malukas.

Malukas, 17, from Chicago, Ill., returns this week with momentum on his side following a strong podium finish last week at World Wide Technology Raceway at Gateway, in Madison, Ill., with his newly renamed and reconstituted HMD Motorsports team. Toby Sowery, from Cambridge, England, also can be expected to contend for wins aboard a second HMD/Team Pelfrey Dallara-AER IL-15 after claiming two runner-up finishes from the last four events.

Other contenders will include Askew’s Andretti Autosport teammates Ryan Norman, from Aurora, Ohio, who secured his first Indy Lights pole position one year ago at Portland, and Robert Megennis, from New York., N.Y., who won earlier this year on the Indianapolis Motor Speedway Grand Prix road course; Dalton Kellett, who will eclipse Arie Luyendyk Jr.’s record of the most Indy Lights starts in Race One this weekend; and Lucas Kohl, who continues his positive learning curve for Belardi Auto Racing in his rookie season.

In the U.S., both races will air live and on demand on NBC Sports Gold with practice and qualifying coverage carried via live streaming on the Road to Indy TV App, RoadToIndy.TV, indylights.com and indycar.com. Internationally, all practice, qualifying and race events will be live streamed on the Road to Indy TV App, RoadToIndy.TV and at indylights.com. Additional coverage can also be found on the Advance Auto Parts INDYCAR Radio Network broadcasts which airs live on network affiliates, Sirius 216, XM 209, indycar.com, indycarradio.com and the INDYCAR Mobile App powered by NTT Data.

Lindh, Kirkwood Continue Indy Pro 2000 Battle
The battle for the Indy Pro 2000 Championship Presented by Cooper Tires and a scholarship valued at almost $600,000 to assist in the graduation to Indy Lights for 2020 looks likely to go down to the wire. After 12 of 16 races held to date, a pair of gifted rookies, Rasmus Lindh and Kyle Kirkwood, are separated by just six points, 323-317. A total of 132 points remain up for grabs, comprising 30 for the win plus bonus points for pole, leading most laps and fastest race lap at each of the remaining four races – a pair this weekend at PIR followed by the double-header season finale at WeatherTech Raceway Laguna Seca in Monterey, Calif., in three weeks’ time.

With five races in the books this season, Lindh, from Gothenburg, Sweden, held a commanding 45-point advantage over fellow rookie Kirkwood following a strong start which included two wins and five top-four finishes for two-time defending champion team Juncos Racing. Since then Kirkwood, 20, from Jupiter, Fla., has gone on a tear for RP Motorsport USA, winning five of the last six races, including an emphatic performance on the Gateway oval last weekend where he stormed through from last on the grid. The only blemish came in Race One on the streets of Toronto, where Kirkwood was inadvertently taken out by his teammate.

Lindh is on a streak of his own, delivering six consecutive podium finishes, and is the only driver to have completed every one of this season’s 385 laps.

Coincidentally, Kirkwood and Lindh were the top two protagonists last year at Portland in USF2000. Lindh managed to lead both races, although it was Kirkwood who came away with two poles, two wins and a new track record as he put the finishing touches to a glorious and record-breaking championship-winning season.

Lindh’s teammate Sting Ray Robb, from Payette, Idaho, has earned four second-place finishes this year and has high hopes of finally making the breakthrough into Victory Lane at what he considers to be his home track, where he will have over 120 supporters in attendance.

DEForce Racing teammates Kory Enders, from Sugar Land, Texas, and Moises de la Vara, from Guadalajara, Mexico, will be looking to maintain their form from one week ago, when both led an Indy Pro 2000 race for the first time and Enders earned his first-ever podium finish. He also posted a new lap record.

Eves, McElrea vie for USF2000 Crown
The outcome of the USF2000 championship also remains in the balance following a recent string of excellent results for Hunter McElrea and some disappointments for season-long pacesetter Braden Eves.

Following an impressive debut at Portland one year ago, Eves, 20, from New Albany, Ohio, began the year with an unprecedented (since the formation of the Road to Indy in 2010) four consecutive victories for the Cape Motorsports team. Another win at Road America in June saw Eves stretch his lead over McElrea to a whopping 41 points. But Eves has finished only once among the top five in the four most recent races, while New Zealander McElrea, 19, has recorded two wins, three additional podiums and three poles from his last six starts for Pabst Racing.

Accordingly, they are now separated by only nine points with four races to go.

Their respective teammates, Darren Keane (Cape Motorsports), from Boca Raton, Fla., and Colin Kaminsky (Pabst Racing), from Homer Glen, Ill., also have enjoyed solid campaigns and currently hold down third and fourth in the points table. Keane, who dovetails his racing with his engineering studies at the University of Florida, earned an overdue first win at Toronto in July. Kaminsky has yet to reach the top step of the podium but seems to be getting closer and closer with each passing weekend, as evidenced by his tally of two poles and four podium finishes.

The hottest driver of all in recent weeks has been Denmark’s Christian Rasmussen, who has accumulated two wins and two seconds from his last four races with the Jay Howard Driver Development team.

Two newcomers will grace the field this weekend, with Josh Green, 16, from Mount Kisco, N.Y., joining Jay Howard Driver Development and Ayrton Ori, 15, from Tampa. Fla., signing on with Legacy Autosport alongside Zach Holden, from Greenfield, Ind. Green currently lies second in the F1600 Championship Series in his first season of racing and has recently been nominated for a prestigious Team USA Scholarship.

Fellow rookie Jak Crawford (Cape Motorsports), 14, from Houston, Texas, will take some time out of his schedule to visit Doernbecher Children’s Hospital in Portland on Wednesday as part of the RE/MAX Month of Miracles, a campaign to raise awareness and funds for Children’s Miracle Network Hospitals. He will be joined by Indy Lights driver Rinus VeeKay. Crawford, who carries sponsorship from RE/MAX of Texas, will also welcome children, their families and representatives from the hospital for a special day at the track on Saturday. He will be sharing videos and photos as part of an Instagram takeover of the official @remax account.