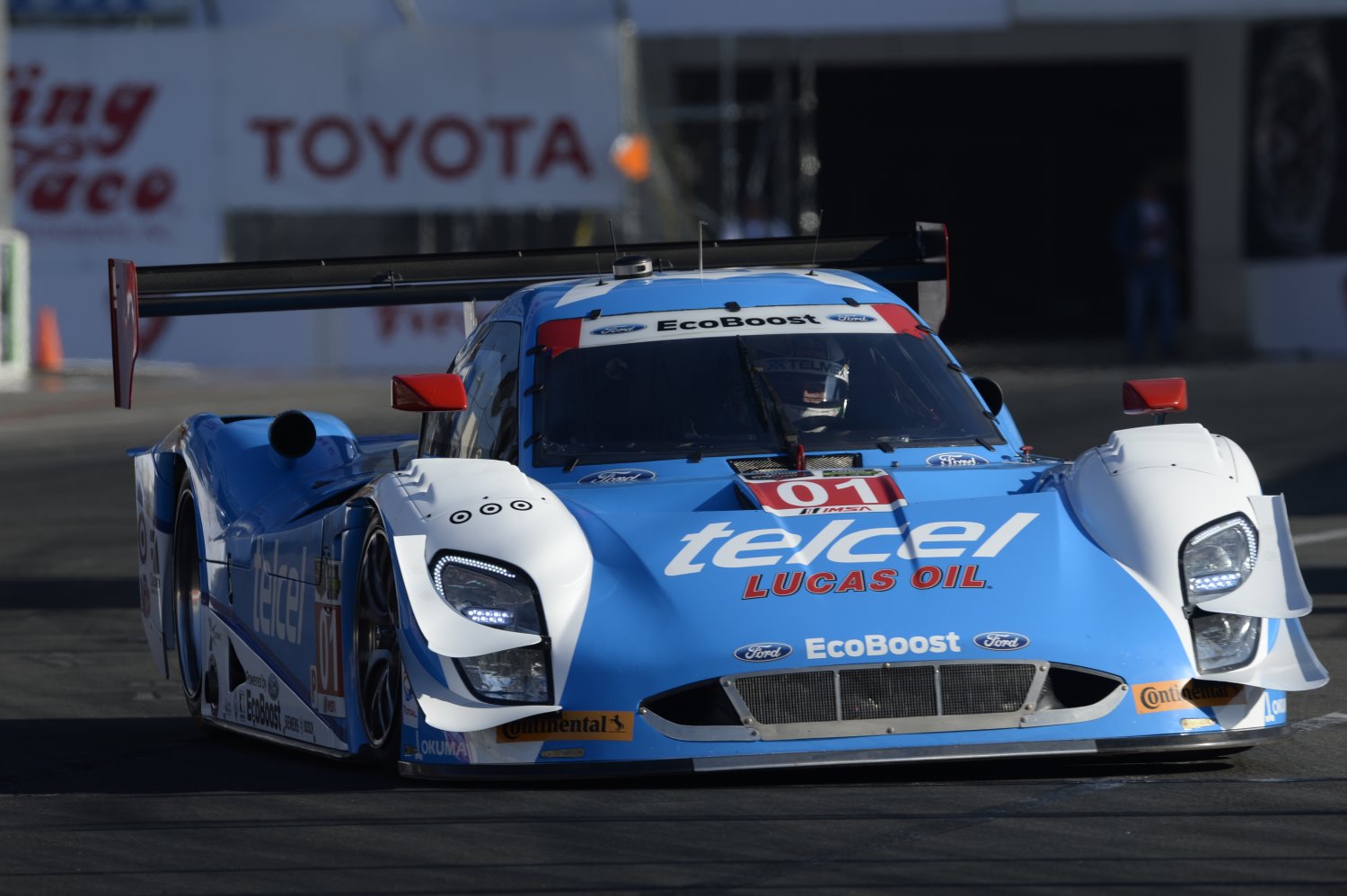 Pruett and Rojas led 76 of 77 laps of the one-hour, 40-minute race and rarely held a lead larger than two seconds, but they had enough to beat the Wayne Taylor Racing Corvette DP of Ricky and Jordan Taylor by 0.759-seconds at the line.

The excitement started early. In a mad scramble for track position, John Pew, driving the No. 60 Michael Shank Racing Ford EcoBoost/Riley, found out the hard way that you can't go three-wide through Turn One. Pew stuffed it into the tire wall and it took most of the entire first lap to get the car free.

Rojas made it through Turn 1 first, keeping clear of the action behind him. Rojas, in the No. 01 Ford EcoBoost/Riley, was able to keep pace ahead of Corvette DPs being driven by Fittipaldi and Ricky Taylor.

The lead teams pitted for fuel, tires and driver changes with about 47 minutes left in the one hour, 40-minute race. Barbosa beat Pruett – they both had just taken over the wheel – but wasn't able to keep Pruett behind him on cold tires.

Pruett slid by Barbosa, and Jordan Taylor, having replaced his brother Ricky, took advantage by following Pruett past Barbosa into second place.

Pruett's move on Barbosa was the pass for the win. The Ganassi team may have made it look easy but Pruett said it was anything but.

""We were all running hard,"� said Pruett. ""I mean it was just short of a qualifying lap I think the whole time. You're trying to be as fast as you could, but also hit your marks every time to be able to hit your laps. When you get 100 minutes like that, and no yellows, you can throw a blanket over the top three cars. I think it says a lot for the TUDOR Championship, what we're doing and where we're going."�

Corvette Racing's Antonio Garcia took advantage of his pole position to take an early lead in the GT Le Mans class. Garcia and teammate Jan Magnussen grew a 10-second lead which they held for nearly the entire race to capture Corvette Racing's fifth win in eight races on the streets of Long Beach.

It took only 15 minutes for Garcia to break away from the two BMW Team RLL cars of John Edwards and Andy Priaulx.

While Garcia was out front the battle for second place ensued with Edwards, Priaulx and the Corvette piloted by Oliver Gavin trying to keep close while dealing with traffic.

Following mid-race pit stops and driver changes, the No. 3 Corvette of Magnussen was able to maintain its lead. The big loser on pit road was Team BMW RLL's No. 55 car of Priaulx and Bill Auberlen. It was third in class before the pit stops. After changing the right-side door on the car, Auberlen exited pit road in seventh.

Mueller and Edwards, in the No. 56 BMW Team RLL entry, held off Corvette Racing's No. 4 car co-driven by Oliver Gavin and Tommy Milner to round out the GTLM podium.