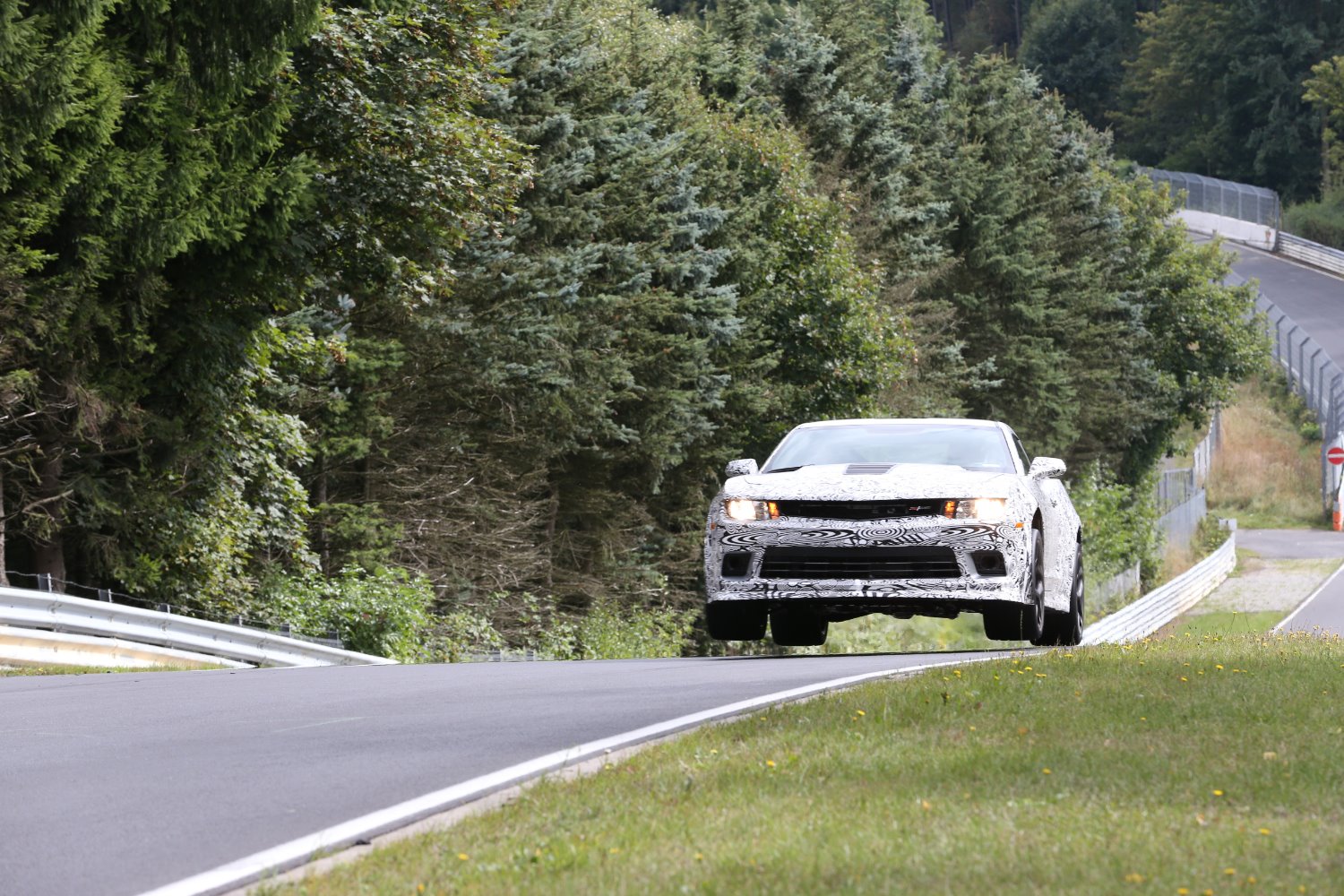 Engineers call it "flying car" logic. On the 2014 Chevrolet Camaro Z/28, the Performance Traction Management system delivers faster lap times on an undulating race track by helping maintain the car’s full power and momentum even if the tires briefly lose contact with the ground, in certain track conditions.

Created for track use only, the "flying car" logic woven into the Z/28's standard PTM system integrates the chassis mode selection, Traction Control and Active Handling Systems. Each is tuned specifically in the Z/28 for optimal track performance and consistency, and is activated by the driver pressing a button in the center console.

Without "fly car logic", the PTM would interpret the force reduction on the tires as a loss of traction and reduce torque to restore it. Such an intervention would likely slow the car and reduce momentum.

"The unique logic in the system uses the ride-height sensors to determine the reduction in force on the tires that’s unique to track driving and allows the car to continue with uninterrupted momentum and, ultimately, a better lap time."

Technologies such as PTM and the track-oriented logic helped the Camaro Z/28 log a lap on Germany’s legendary NÃ¼rburgring road course that was four seconds faster than the Camaro ZL1, and beat published times for the Porsche 911 Carrera S and the Lamborghini Murcielago LP640. The Flugplatz section of the NÃ¼rburgring has a rise that engaged the logic during the Z/28’s 7:37 lap time.

Additionally, PTM enables the driver to press the accelerator pedal to wide open at the exit of the corner and manages acceleration based on the given vehicle dynamics. Five performance levels, or modes, are available to accommodate a variety of driving conditions.

The track-oriented "flying car" logic is available in all PTM modes, but it is most effective in Mode 5, calibrated for the fastest lap times. The Z/28 represents the first non-Magnetic Ride Control application of PTM, pioneered on the Corvette ZR1 and incorporated in the Camaro ZL1. Engineers further refined it for the car on the road course at GM’s Milford Proving Ground in Michigan and on Virginia International Raceway and Road Atlanta.

Like the Flugplatz, a section of the Milford course proved particularly effective in calibrating the logic. It features a hill sandwiched between turns Pahrump 1 and 2, named for and based on a pair of challenging corners on the 3.4-mile-long road course at Spring Valley Motorsports Ranch, in Pahrump, Nev.

"The hill between Pahrumps 1 and 2 is ideal for testing the feature," said Wise. "The car noticeably lifts as it clears the top of the rise. Without the logic built into PTM, the torque reduction would unnecessarily slow the car. With it, the car receives full torque over the rise, which helps reduce the lap time – and it is part of the reason why PTM Mode 5 can be as good, or better, than a driver’s best effort, on certain track conditions."

"The new Camaro Z/28 was bred on and for the track," said Wise. "From the hardware bolted to the chassis to the software such as the "flying car" logic, every element built into it was designed to help deliver faster lap times, with consistency, control and dependability."

Ready for the track
The 2014 Camaro Z/28 is the fastest Camaro ever on a track, with improved speed coming from three areas:

Power comes from the 7.0L LS7 engine, rated at an SAE-certified 505 horsepower (376 kW) and 481 lb-ft of torque (652 Nm). A close-ratio six-speed manual transmission is the only transmission offered and power is distributed to the rear wheels via a limited-slip differential featuring a helical gear set, rather than traditional clutch packs, for optimal traction.