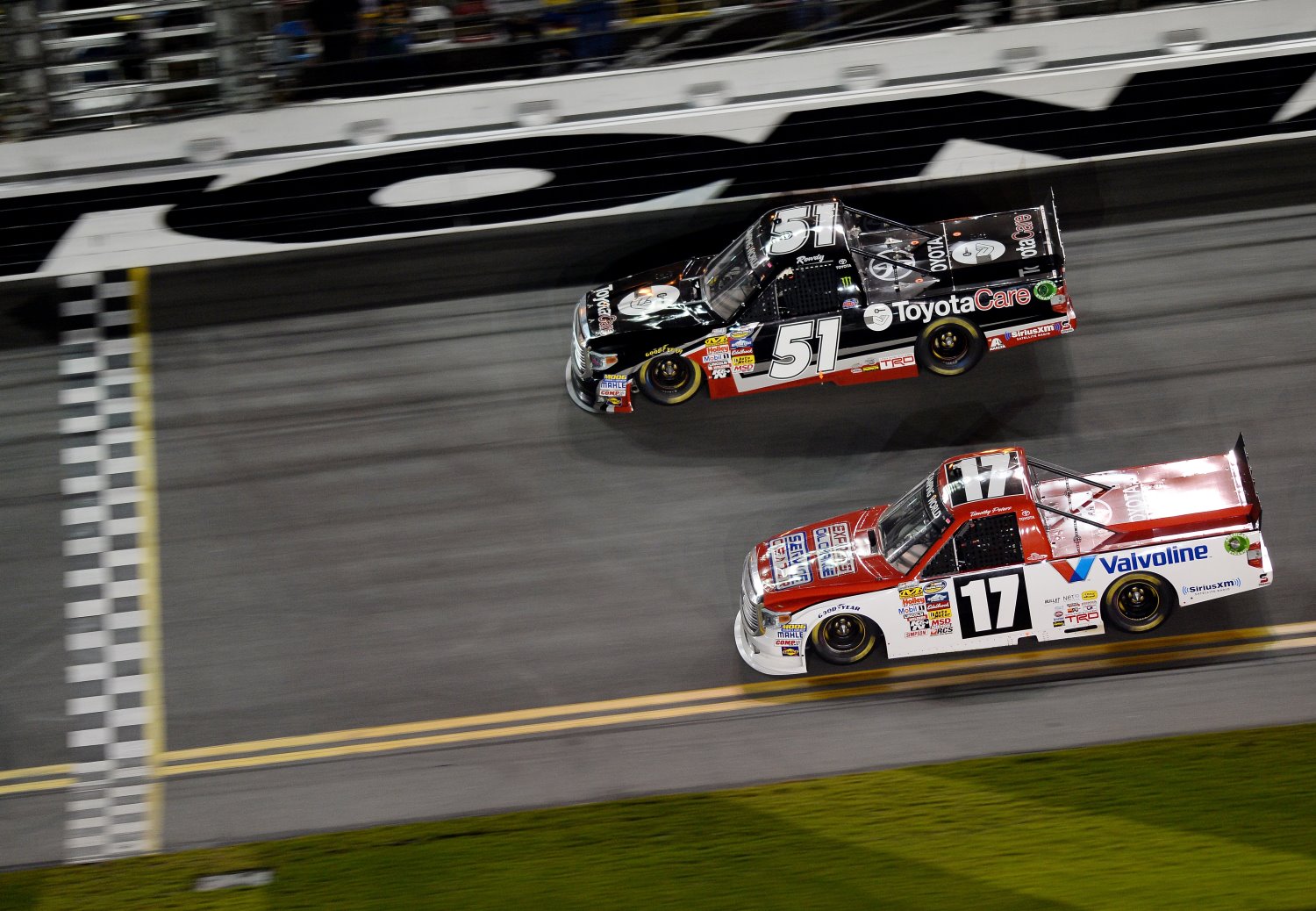 Kyle Busch made history at Daytona International Raceway on Friday night, becoming the first driver to score a victory at the track in four different major touring series with a win in the season opening event for the NASCAR Camping World Truck Series.

Busch beat out Timothy Peters with a perfectly timed last-lap pass to score his 36th-career series victory in the closest truck finish in Daytona history. Peters held off Johnny Sauter for third, followed by Ryan Truex and Ron Hornaday, Jr.

Busch led 25 of 100 laps but won out by less than foot at the line, with a margin of victory of just 0.016 seconds – the eighth-closest ever in a truck series race.

“I just kind of threw a Hail Mary out there and see if my truck was faster than (Peters)," said Busch. “Luckily it happened, it worked, the timing was good, we made it to the start/finish line first. All circumstances played out in our favor and it just sort of worked.

“I thought (Peters) did everything he needed to do. If anything, he was just a little slow at blocking me to the outside. That was it.

“I got all four. This is the one that was eluding me," said Busch. “I’ve been trying for years to get the fourth and finally got the fourth here with the trucks. I’d love to be a Daytona 500 winner."

The truck series race certainly lived up to its reputation as one of the most thrilling events of Speedweeks.

After a nearly one-hour delay for rain, Ben Kennedy – the great-grandson of NASCAR founder Bill France, Sr. – led the field to the green flag and led the first 52 laps before a pit road miscue cost him the top spot as Busch cycled to the front after a round of pit stops.

Back under green, Busch and Peters would trade the lead for the 24 laps until a multi-truck crash on lap 75 when Ross Chastain and Parker Kligerman got together in turn two, eventually collecting 17 trucks.

After another round of pit stops, Busch regained the top spot and led the next 16 laps with the top five running nose to tail in a single-file freight train.

Peters, mired back in 10th place, mounted a charge to the front with seven laps to go, pulling a train of his own on the outside with help from Truex and Hornaday while Busch and Sauter led the parade on the low side.

With five laps to go, Peters pulled even with Busch and dropped down in front just past the start finish line to take the lead.

With Truex and Hornaday continuing to work the high side, Peters desperately tried to block and hold off Busch, opening up one truck-length lead over the final lap.

Coming off turn four on the final lap, Busch turned his Toyota Tundra hard to the outside and side-drafted even with Peters, who tried to block but had to go low to hold off Sauter, giving Busch just enough momentum to edge Peters at the line.

It was an all too familiar scene for Peters, who used a last-lap pass to beat out Todd Bodine in the 2010 series opener.

“It was so close," said Peters. “I was trying to back up a little bit to him (Kyle Busch), but it was just like Johnny Sauter gave him a really good shove coming through (turns) three and four.
“You never want to be the bridesmaid when you know you went to victory lane here before, but second-place at Daytona isn’t too bad."

“It was pretty wild," said Sauter. “I just wasn’t in a position to get a run. I was committed to Kyle (Busch) no matter what. The 32 (Ryan Truex) was just enough on the outside of me and with a truck on the outside it just bogs you down and we didn’t have momentum."

How does it feel to be a Daytona Truck Series winner?

“It sounds awesome. I’d love to be a Daytona 500 winner, but man, first and foremost we’ve got a good buddy, our truck driver Woody is in the hospital tonight — so we’re thinking about him. He had some issues down here in Daytona just breathing and we’re hoping he’s getting better and we’re hoping he’s coming back to drive this thing home tonight. All in all, can’t say enough about everyone at Kyle Busch Motorsports, this whole team. Everyone from Toyota Care and TRD (Toyota Racing Development) — building this truck and helping us and doing all the research and development with us. This is the first win for the new truck so it’s pretty exciting to see Toyota back in victory lane again here in Daytona, but also for KBM. This now makes it to where I’ve won four. I’ve won the ARCA race here. I’ve won the Truck race here. I’ve won the Nationwide and Cup — that’s the one (Truck Series) that was eluding me. I was trying to get a Truck win here and finally got one."

How were you able to make the move on the final lap?

“I didn’t know that I had enough to get it done. Timothy (Peters) was really fast — he could make that outside lane go. He got up to the lead there and then pulled down in front of me and the outside was still trying to get going with the 32 (Ryan Truex), but Timothy was so fast leading the top that he could get to the lead and then he was so fast leading the bottom that he could pretty much keep those guys at bay behind us. Coming out of (turn) four I just thought, ‘Hey, I’m by myself and the 98 (Johnny Sauter) is far enough back and I think if my truck is faster than his truck then I think I can suck up on him a little bit, pull out and then see if I couldn’t get alongside of him enough to pull him back with the side draft.’ Kind of do like an old school sling shot. It didn’t really look like one, it just kind of looked like a slow motion sling shot at real speed, but it happened and got alongside of him and drug him back — and then him and the 98 had to get nose-to-tail and we already had the momentum."

How important is a win at Daytona in February?

“It’s awesome to win here in Daytona, especially in February — early in the season for Trucks, Nationwide, Cup, whatever it might be — the Daytona 500 is the biggest one especially. This is an awesome feeling. I think I’m the first or maybe the only one to win ARCA, Truck, Nationwide and Cup here at Daytona. I got all four. I’ve been trying for years to get the fourth and finally got the fourth here with the trucks."