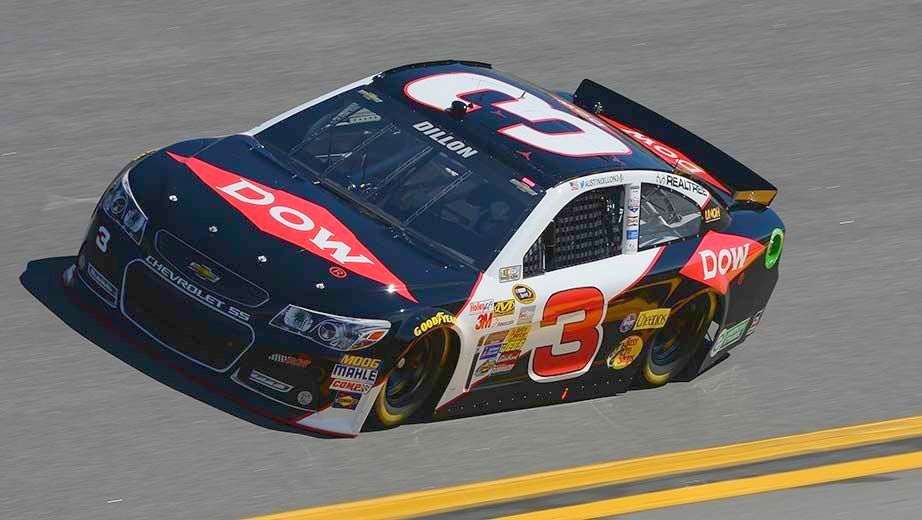 As everyone expected when it was announced Dale Earnhardt's number would be back in the Sprint Cup Series – The No. 3 is No. 1 again.

The iconic number made famous by the late Dale Earnhardt is back in NASCAR's premier series and it's on the pole for the Daytona 500.

Austin Dillon, driving for his grandfather Richard Childress — who helped lead Earnhardt to six of his seven NASCAR Cup championships — ripped off a fast lap of 196.019 mph Sunday.

"I feel like our engines have been really good since we've been here (at Daytona). … I just had to get my shifts. And I knew that hopefully I could hold the wheel straight for two laps," Dillon said.

The return of the number — last seen here at Daytona International Speedway on Feb. 18, 2001 when Earnhardt was killed on the final lap of the Daytona 500 — has left NASCAR's fan base divided.

Many fans of the iconic driver wanted to see the number retired to honor him. Others believe having the number active on the track honors the legacy left by one of NASCAR's brashest, biggest talents. Childress has owned the number and decided this was the year to return it.

Dillon, who won the 2011 trucks title and the 2013 Nationwide title, is moving up full-time into Cup this year at Richard Childress Racing.

Both Dillon and Truex Jr. have set their starting positions in the Daytona 500 as first and second, respectively. The rest of the drivers will race in the Budweiser Duel events to determine their position in the race.

“Yeah, front row that is what we are here for today," said Truex. “Obviously I can’t say enough about this team. What a great job. I think we have got about seven miles on this car. One run yesterday, no testing down here, just an amazing job by Todd (Berrier, crew chief) and Cole Pearn (team engineer) and everybody on the team.

“Obviously I am a pretty lucky guy to get to hold the wheel. ECR (Earnhardt-Childress Racing) engines front row, we are lucky to have them under the hood and just have to thank everyone for the hard work. Really excited about the rest of Speedweeks."

Danica Patrick, who topped Coors Light Pole qualifying in 2013, and Stewart-Haas Racing teammate Tony Stewart finished 25th and 35th, respectively, during qualifying. Both drivers suffered blown engines during practice Saturday and will start at the rear for their respective Duel races, as well as the Daytona 500.

The Daytona Duels will take place Thursday, with the first 150-miler beginning at 7 p.m. ET on FOX Sports 1. Drivers will duel for 60 laps to earn their positions in the Daytona 500 on Sunday.

The top 15 finishers in each Duel race — excluding Dillon and Truex Jr. who are starting first and second in the field — will earn an automatic spot in the Daytona 500, filling positions 3-32.