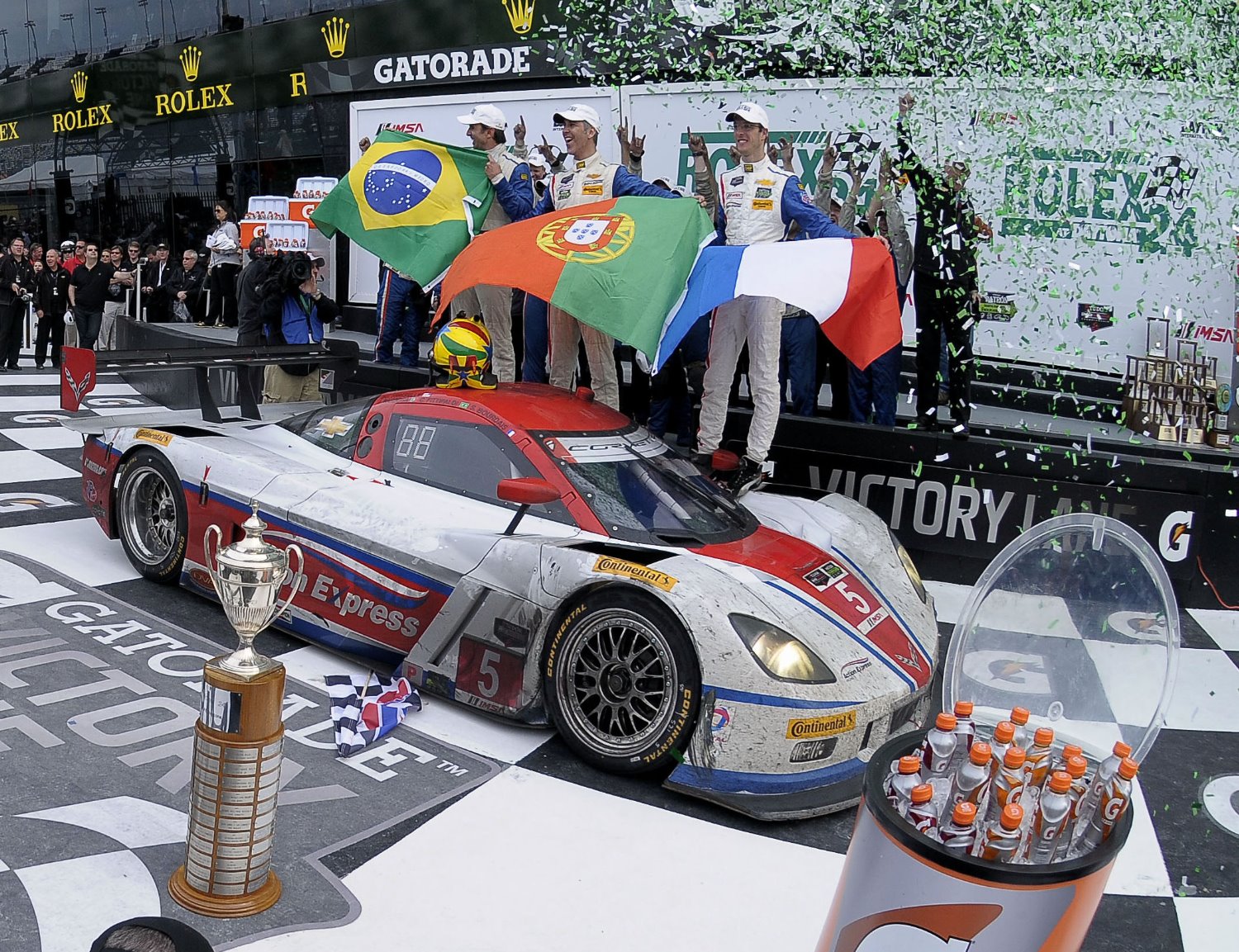 The 2014 Rolex 24 At Daytona proved emphatically the popularity of top class endurance motorsport and its ability to keep spectators on edge until the checkered flag. It emphasized once again that there is no substitute for complete and exhaustive preparation; and, it demonstrated the importance of uniting skill, determination, speed and experience within the driver line-up.

Action Express Racing (AER) took the overall win with its #5 Chevrolet Corvette DP driven by Christian Fittipaldi of Brazil, Frenchman Sebastien Bourdais and Portuguese native Joao Barbosa. The margin of victory was slim, a mere one and a half seconds, as the compact Daytona International Speedway track characteristically kept the winning permutation open until the very end.

New era, fierce competition
The 52nd Rolex 24 At Daytona, held over the weekend of 25-26 January, was heralded as a new beginning for sports car racing in North America. The race was the first of the new United SportsCar Championship, which last year merged Grand-AM and the American Le Mans Series to create a unified sports car series in the USA for the first time in over fifteen years. The result was a crowded 67-car field with teams spread across four classes, and which at times seemed to fill the entire 3.56-mile circuit. This exceptionally competitive grid, pulsating with driver talent from around the globe, led in turn to heightened media and spectator interest, with a packed infield throughout the weekend enjoying some Florida sunshine while much of the US was in the freezing grip of a polar vortex.

Joie Chitwood III, President of Daytona International Speedway fanned the flames of expectation ahead of the start by remarking that his organization “had put more effort into this event than any other of the year ahead." Chairman of International Motorsports Association (IMSA) Jim France, whose father Bill had the foresight to build the Speedway facility back in the 1950s, acknowledged the significance of the race within professional motorsport: “Alongside races such as 24 Hours of Le Mans and the Indy 500, this is a race that can validate your career. This is one of those major motorsport championships and races that most members of the public would include in their top ten. From a driver’s perspective to compete and have the opportunity to win here is a big deal."

The eventual race had it all: a spectacular selection of major automotive marques – Audi, Aston Martin, BMW, Chevrolet, Ferrari, Ford, Nissan, Viper (Chrysler) and, of course, Porsche, whose GT Le Mans class win was the brand’s 76th class victory at America’s iconic endurance motor racing event; neck and neck final hour racing that saw the results in three classes in the balance until the closing seconds of the 24-hours; an horrific accident that has left one driver hospitalized with serious (but fortunately not life-threatening) injuries; a controversial call by race officials; and, of course, a host of other octane-fuelled moments as the cars hit speeds in excess of 190 mph (305 km/h) on the straights.

A team game
Everyone points to the work you do beforehand as being key to a race of this nature. Paul Gentilozzi, a winner in 1994 and now principal of RSR Racing team: “It is the ultimate test of preparation, strategy and discipline." Bob Johnson, owner of the winning AER team: “Starting this new season was a huge challenge since there were a lot of things to overcome and learn. Every team works hard, but I believe that you are rewarded for what you work for. We talked a lot about this before the race, making sure every individual on our team was ready to do their very best."

At the finish Johnson admitted that so good was their preparation that the race had not seemed as difficult as previous ones even if throughout the 24 hours he was not sure how certain elements would unfold. One part of his preparation that really delighted him was his driver line-up: “JoÃ£o (Barbosa) and Christian (Fittipaldi) have been together for a year and work very well together. Finding the third driver was hard, and it took some time. Number one I was looking for someone who can get along with other people, be serious about their job but not too serious. I found Sébastien quite late, but he turned out to be phenomenal not just on the track, but the way he fitted in generally."

Drivers at endurance races are operating outside the natural comfort zone of a professional motor-racing competitor. They are forced to hang up their egos before entering the team’s motor home and have to work collaboratively with drivers that are, in other cases, their opponents. Mutual respect abounds and close working relationships are formed. The combinations blend extended race-craft with raw talent; speed with steadiness; and, knowledge of the car with circuit familiarity. Over the course of a 24-hour race there is no room for prim donnas or loners, as drivers continually exchange advice and experience.

Those that gel succeed like AER’s Prototype line-up, as Nick Tandy from the GTLM winning Porsche 911 can attest after meeting his team mates just three weeks ago and noting how well they bonded: “We were all strangers more or less when we came to the Test, but now at the end of this weekend we’re the champions. It just goes to show what a good job everybody has done within the team." Co-driver Richard Lietz, a winner in 2012, was equally impressed: “We’re a very young team. We came together really in a very short amount of time." The Porsche North America car carried a half second advantage across the finish line after a determined challenge from the BMW Z4 of Team RLL.

Traffic issues
When asked to identify the biggest problem they faced this year, most drivers pointed to the diverse grid and the on-track congestion that could result. A traffic related accident threatened to cast a long shadow over the race, occurring just before sunset on Saturday. Memo Gidley, driving the pole-winning GAINSCO/Bob Stallings Racing, pulled out to pass a slower car, accelerated to nearly full speed and slammed into Matteo Malucelli's virtually stationary Ferrari. Gidley broke his back, left arm and left leg, and faces a long road to recovery. Malucelli was fortunate to escape almost unscathed.

Neck and neck
In the GT Daytona class, the biggest with 29 cars, the competition was truly fierce. In qualifying the top twenty were within one second of each other, the first two to finish the race separated by 13 places on the starting grid. The winning Ferrari 458 of Level 5 Motorsport led for much of the race, but a series of late incidents brought the competition together. A final caution for a car off the track with less than 10 minutes remaining put Markus Winkelhock driving the #45 Flying Lizard Audi R8 firmly in the rear-view mirror of Alessandro Pier Guidi driving the Ferrari.

Fighting for any inch of advantage the two cars were locked together. Contact in the chicane a few laps from the finish resulted in the Audi suffering damaged suspension. Winkelhock managed to maintain the challenge until another incident on the final lap forced him onto the grass with half a lap to go. #555 went on to finish ahead by 1.3 seconds. In the heat of the moment, officials initially penalized the Ferrari for what was deemed avoidable contact lifting the Audi into first place. Some four hours later, after a thorough review of the circumstances, the penalty was rescinded, restoring the Level 5 team to the top of the podium.

#555 driver Jeff Segal was ecstatic and paid tribute to his team: “This race has meant everything to me growing up in America racing sports cars. The Rolex 24 is it. This is the most prestigious race. To win this race with a team like Level 5 and the driver line-up…it’s incredible. It was a phenomenal race."

Within the victorious teams, both overall and individual class winners, there was unanimous agreement that collective spirit and hard work in the lead up to and during the 24 hours of the race made the difference at an event where the margin between success and failure is minute.