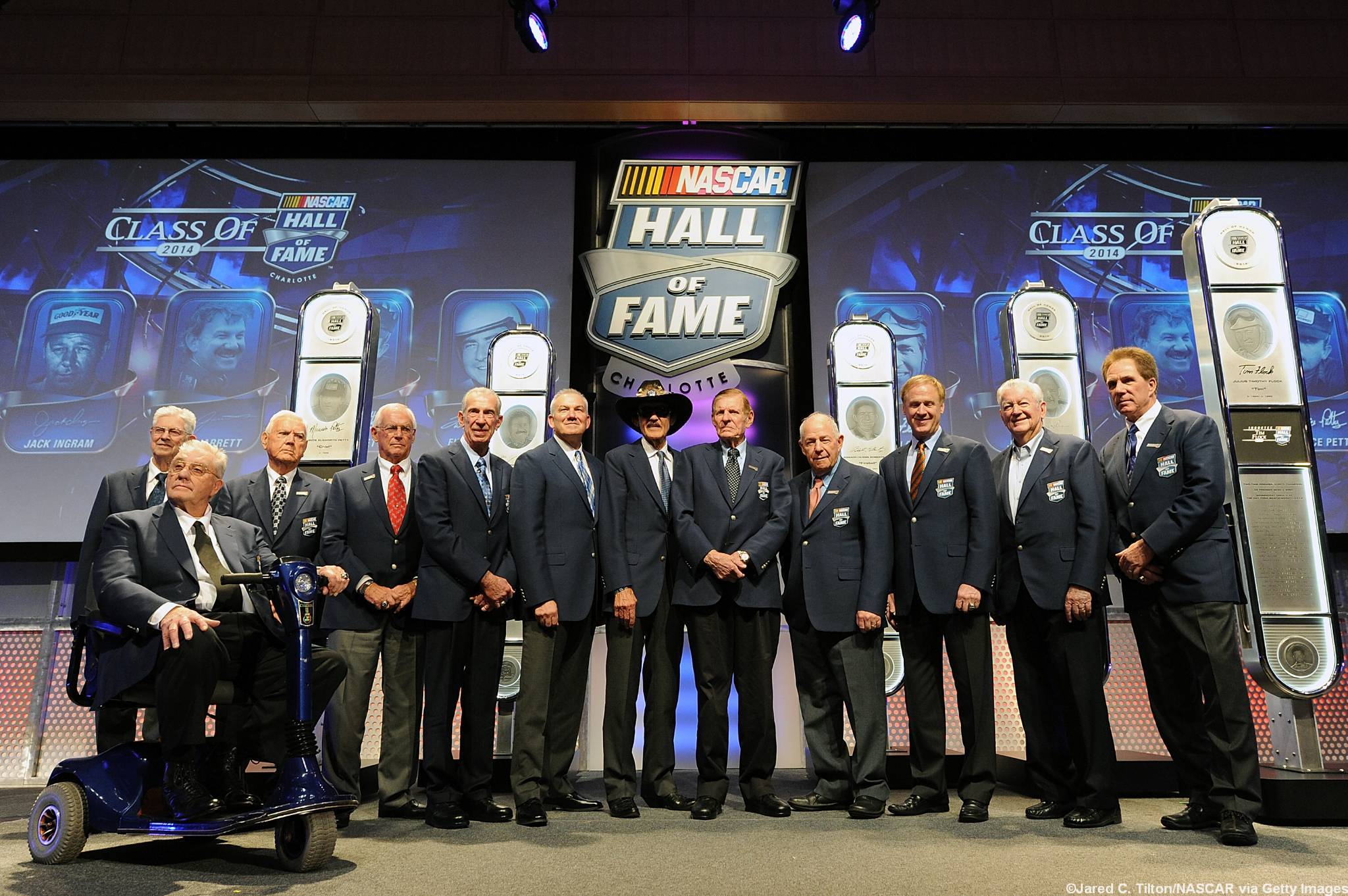 NASCAR inducted their latest class into the NASCAR Hall of Fame on Wednesday night, a class that brings together three past NASCAR champions, a legendary engine builder from a super-star racing family, and a super-speedway racing pioneer.

NASCAR champions Dale Jarrett, Jack Ingram, and the late Tim Flock were among those added in the Class of 2014, along with Maurice Petty, the man that built the engines that powered Lee and Richard Petty to more than 200 victories and seven championships, and the late Glenn “Fireball" Roberts,

Roberts was one of the sport’s earliest stars, a dirt-track racer from Florida who first raced at the famous Daytona Beach Road Course in 1947. When the Daytona International Speedway opened in 1959, Roberts teamed up with famed crew chief Henry "Smokey" Yunick to win the inaugural Firecracker 250. In 1962 Roberts and Yunick finally broke through to win their first Daytona 500.

Over the span of 15 seasons and 207 starts, Roberts tallied 33 victories and 32 poles. Although he never completed a full season, he did finish runner-up in the points in 1950.

After contemplating retirement in 1964, Roberts returned for a handful of starts including the World 600 at Charlotte Motor Speedway – NASCAR’s longest race.

It was during that race on May 24, 1964 that Roberts crashed just seven laps into the event, trying to avoid a wreck involving fellow Hall of Famers Ned Jarrett and Junior Johnson. The impact from the crash ruptured the gas tank of Robert’s Ford, engulfing the car in flames. Roberts was airlifted to a hospital with burns over 80 percent of his body. He passed away a in the hospital a month later, on July 2, 1964. He was just 35 years old.

Although he never won a NASCAR title, Robert’s legacy in NASCAR goes far beyond accolades he won on the track, as his tragic crash helped inspire safety innovations that ultimately saved many drivers.

“We are proud that our grandfather, who sacrificed his life to racing, is being honored by NASCAR, the organization that set the scene for a life well lived," said Robert’s grandson, Matty McDaniel, who accepted Roberts’s induction. “There is no doubt that our grandfather would have shared this special night with everyone who influenced and had an impact on him during his career, including his family, friends, colleagues and fans."

Maurice had been a part of the Petty’s family-owned team since its formation in 1949. Although Maurice mainly worked on the cars, he also had a brief driving career, making 26 starts between 1960 and 1964. But when an accident at in the 1961 Daytona 500 ended Lee Petty’s career, Maurice turned his attention to producing the team’s engines, while Richard drove the car.

It was as an engine builder that Maurice Petty made his mark, helping craft the famous Chrysler hemi engines that powered Richard no. 43 car to countless victories. Over his career with Petty Enterprises, cars with engines Maurice built won over 200 races, including seven Daytona 500s, and a record seven NASCAR titles.

“It's an honor and a privilege for me to be inducted into the NASCAR Hall of Fame," said Petty, who accepted his induction from his brother, Richard. “Who would have thought growing up that there would be guys, four of us, out of a small, rural country community that would be in a North Carolina Hall of Fame."

Like the Petty’s, the Jarrett family also carry a great family legacy in NASCAR. From “Gentleman" Ned Jarrett – a 2011 Hall of Fame inductee -to his sons Dale, the 1999 NASCAR Cup champion, and Glenn, a respected NASCAR commentator, the Jarrett family has been involved in NASCAR since its very beginning. Now, the family legacy continues into the Hall of Fame with the induction of Dale Jarrett as a member of the Class of 2014, becoming the third father-son duo to be inducted after the Petty’s and Bill France, Sr. and Bill France, Jr.

Unlike some of today’s second- and third-generation drivers who begin their racing careers before they’re old enough to get their regular driver’s licenses, Dale Jarrett began his NASCAR career a little later in life – making his first start in the Cup series in 1984 at the age of 30.

Jarrett – who had eyes on becoming a professional golfer before turning to racing – didn’t find a lot of success in his early career, but after moving over to the Wood Brothers team in 1990, Jarrett finally broke through with his first victory at Michigan, and never looked back.

Over the next 18 years, Jarrett won 32 times – including the Daytona 500 in 1993, in a finish made famous by his father who was calling the last lap from the broadcast booth. He captured the 1999 Cup title driving for Robert Yates Racing before finishing out his career with Michael Waltrip Racing. He retired in 2008 at the age of 51.

“I am honored that many of you could join me here tonight, and just know that if we worked together during my 31 years of driving or the last six years in the world of television, I have thought about you and appreciate the opportunity we had to work together," said Jarrett. “Your efforts and sacrifices are really the reason I'm here tonight.

“And of course my father. And now fellow Hall of Famer. That has a nice ring to it, doesn't it, dad? My dad has been everything a son would want his father to be: Successful, a leader by example, a teacher you can believe in, and always there to support me. My dad was and still is today my hero. That's what really makes this night so very special. I'm joining my father in the NASCAR Hall of Fame."

Two-time NASCAR champion Tim Flock also came from a pioneering racing family that has been part of stock car racing since day one – a family that included three racing brothers and their sister, one of NASCAR’s first female stock car drivers.

Like Jarrett, Julius Timothy “Tim" Flock started his racing career a little later in life, making his first start at age 25 along with his brothers Fonty and Bob in NASCAR’s first-ever Strictly Stock event on June 19, 1949 in Charlotte, N.C. Bob held the pole, Fonty finished second and Tim came home fifth in NASCAR’s first race, then three weeks later the brothers joined their sister Ethel for NASCAR’s second-ever race on the beach at Daytona. Tim finished second while Ethel got the better of her other brothers, finishing 11th.

Although the youngest of the “Flying Flocks", Tim proved to be best of the bunch – winning 39 races over a 13-year career that included the 1953 and 1955 Grand National Series titles.

Flock might be best remembered for his famous “co-driver", a Rhesus monkey named “Jocko Flocko", won accompanied Flock in his car during his win at Hickory in 1953, becoming the only winning monkey ever.

Flock would later be banned from NASCAR in 1961 for his support of a drivers union, but still competed in other racing events. He would eventually be reinstated by NASCAR in 1965 but never made another start in the Cup series.

Flock passed away in 1998 at the age of 73. His induction was accepted by his widow, Frances Flock

“I bet my darling and all the passed drivers are having one huge race up in heaven tonight. I can almost hear them, telling them stories, especially Tim telling the story about Jocko," said Flock. “He would be so proud and humbled to receive this honor tonight and is still remembered for his racing career."

In 1982, when NASCAR created the Busch Series, Ingram was the inaugural champion, winning seven races to beat out rival Sam Ard for the title.

Nicknamed the “Iron Man", Ingram would later go onto win the 1985 Busch title as well, racking up another five wins. In all, over a nine-year span in the Busch Series, Ingram chalked up 31 wins, finishing outside the top five in points just twice. All but two of his 31 victories came on short tracks, his last coming in 1987 at the same track he had scored his first in 1982, Hickory Motor Speedway.

At the time he retired in 1991, he was the all-time Busch Series wins leader, a record later broken by Mark Martin in 1997.

“I'm honored to be here tonight beyond words," said Ingram of his induction into the Hall. “This is a major lifetime achievement for me."

Ingram spoke about losing out on a purse from a 100-lap feature when the check bounced, and he put in a call to NASCAR, who had guaranteed the purse. 10 minutes later, he had his money – five $100 bills.

“That kept my family going for several months," said Ingram. “I was a total supporter of NASCAR from then on because Bill France, he meant what he said when he said he guaranteed that purse, and he showed it to me, and I appreciated that the whole rest of my life, and I still think about that ride today. If I'd have been running at some other racetrack, that wouldn't have never happened."