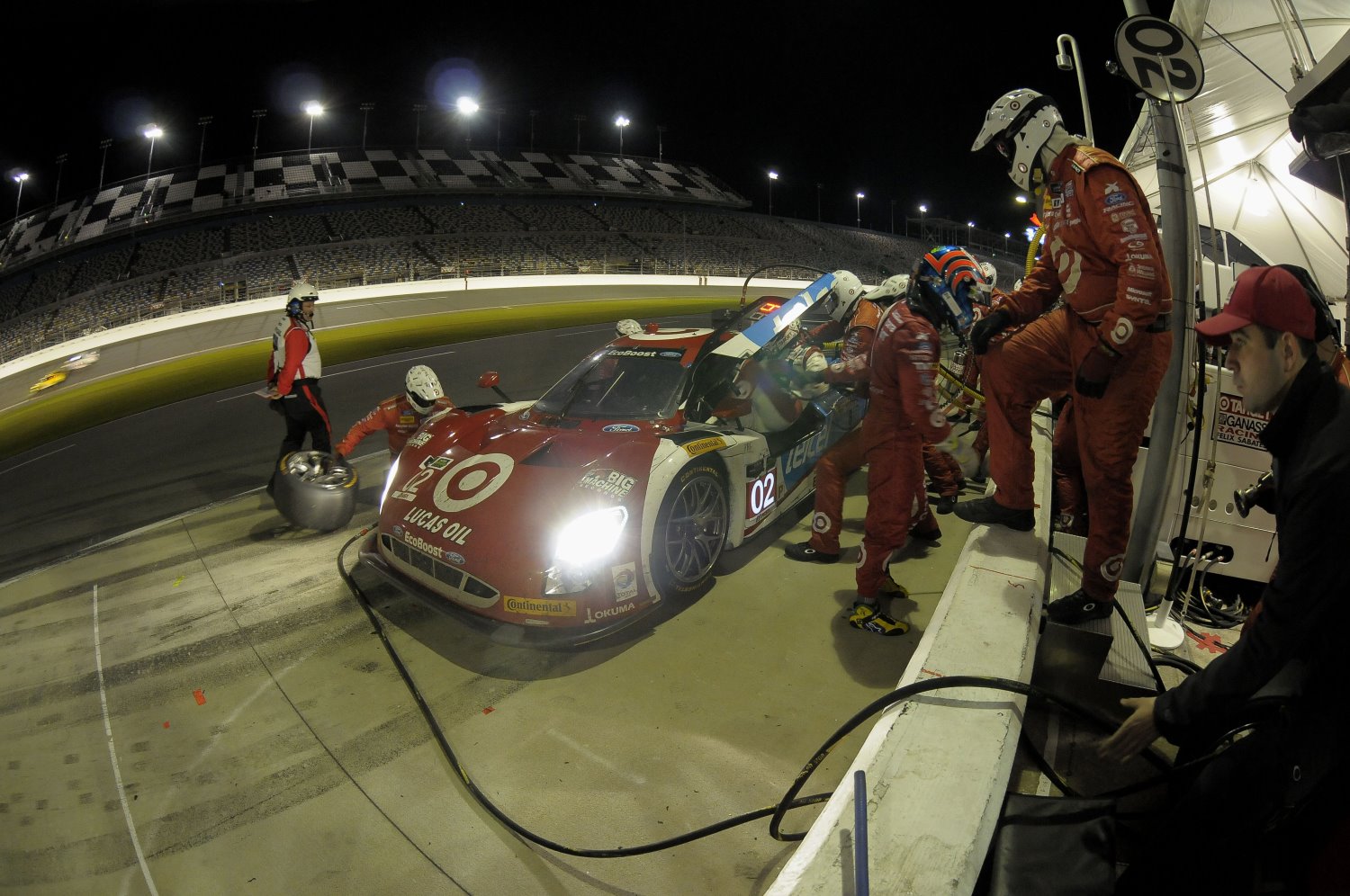 However, the Action Express Corvette was the dominant car in the opening half of the 52nd Rolex 24 At Daytona as both Action Express entries were among the Chevrolet-powered that led during the first 12 hours at Daytona International Speedway.

The No. 5 Corvette DP of Joao Barbosa, Christian Fittipaldi, Sebastian Bourdais and Burt Frisselle led a vast majority of the race and was shown sixth overall but on the lead lap during the most recent round of pit stops. Bourdais held the fastest lap of the race – 1:39.830. Shortly after halfway, Fittipaldi cycled back into the lead and took over the top spot from Frisselle, who also drives the No. 9 Action Express car.

The No. 10 Wayne Taylor Racing Corvette DP was shown third with Ricky Taylor at the wheel. In all, five of the Corvette DPs led the race at one point.

Several big name cars had issues. The No. 01 CGR Ford EcoBoost Riley suffered major right front damage past the 10-hour mark after completing 270 laps, and lost more than 30 laps to the overall lead. The car’s suspension was bent, the splitter needed to be replaced, and the starter needed to get sorted. Sage Karam took over from Scott Pruett just prior to half distance.

Before the halfway mark, the No. 3 Corvette Racing Corvette C7.R pitted with smoke billowing from the engine bay, and the hood removed. That dropped that car outside the top five in GTLM.

Meanwhile BAR1 Motorsports’ James Kovacic was evaluated and released after a small fire sprouted from the No. 87 ORECA FLM09. The young Australian was running third in the PC class at the time of the incident.

SEBASTIEN BOURDAIS, NO. 5 ACTION EXPRESS RACING CORVETTE DP:
HOW WAS IT OUT THERE? (Approximately 15.5 hours remaining in race)
“That is a loaded question. It is a little bit crazy out there right now. All we are trying to achieve right now is to see daylight, and see if we can start getting a little racy out there once we get closer to the finish. But even doing that, I didn’t manage to quite stay out of trouble. Got hit and spun around. We have a fast car, but it feels like you are playing poker every time you are passing a slower car. It is a bit of a mind game out there. You are being careful and then you get a little conservative, and then everybody is jumping on you. And then you spend more time in that pack of traffic, and you eventually get it. If you try and be a little more aggressive, you get hit as well. So it is pretty tough. But overall, the good thing is that the car is still intact. It’s a hot rod. It is pretty quick right now. The balance is pretty good. Hopefully by the end of the race, there are fewer cars on track and people start to figure out a little bit more where they need to be on the race track because it feels like there are some terrorists out there."

WHAT IS THE CONDITION OF THE RACE TRACK?
“It’s not so bad. The number of cars it can clean things up pretty quick. But for sure, if you put wheels out of the line, that is when it becomes tricky. You kind of have to drive the GT line because they use the curbs and sometime even a little bit more than that. You’ve got to follow that route otherwise you are putting a lot of stuff on your tires. That’s not good. You’ve got to watch out a little bit, but track conditions are not bad at all. It is very cold out there, and engines are running good and the grip is obviously is better when the track temperatures are dropping a bit, so right now. It’s about as good as we’ve seen all week pretty much."

DID YOU AND YOUR TEAMMATE (JOHN MARTIN) HAVE A DISAGREEMENT AT THE BUS STOP?
“Yes. I guess I was expecting a little bit of courtesy by my teammates. But somehow, we aren’t on the same frequency here right now. I was a little surprised, I took my sanction. Just spun the thing around and made sure I wasn’t going to hit him, went to the back and from there I just had to be a little patient. But I was definitely not expecting what happened there."
WHEN WE GET TO THE END OF THE RACE, DO YOU HAVE THE EQUIPMENT TO GO FOR THE WIN?
“I would say if the conditions remain the same, yes, we’re pretty strong. We’ve shown that with fast lap. It seems like we are in a little bit more of a world of hurt when the conditions were warmer and the track was slicker, and so we will see. Tomorrow is supposed to stay overcast. So if it is overcast, the track will stay fairly cold and will play in our favor. You could definitely tell that the P2 were definitely in the hunt this afternoon. It seems like at night when the conditions cool off, then the DP gets up. It is a variable game."

ERIC CURRAN, NO. 31 MARSH RACING CORVETTE DP
HOW HAS IT BEEN SO FAR?
"It's not the ideal race for us so far. We started out decent and strong. We had a little issue with brake bias issues early in the race. We had too much rear brake in the car and went for a spin. That set us back a lap or so. The biggest issue is that the front splitter mounts broke on the frame rail. We had to spend 15-20 laps in the garage fixing the frame rails for the splitter extensions. It's too bad because we're running 1:41s and 1:42s, which is similar to what the leaders are doing but that doesn't help us when we're 20 laps down. These guys are all working hard in our first prototype race ever."

ARE THESE TYPICAL NEW CAR ISSUES?
"It's tough. You never know what to expect. A splitter extension mounts breaking? That's a little weird but anything can happen in this race. We're on a steep learning curve with this prototype. Things like the brake bias is stuff that bit us. We've never run carbon brakes before. We didn't know where we needed to be and gambled on a setup that didn't quite work. We will keep going though. We're learning a ton and learning fast. We need to do so more testing after this to get a better hold on the car."

RICHARD WESTBROOK, NO. 90 SPIRIT OF DAYTONA CORVETTE DP
"It's a little bit frustrating. We're just fighting to stay on the lead lap at the moment, which we're doing a good job of. Some others have found some pace and we've lost some. So now we're working our way back to getting the car how it was in practice. We're trying out some stuff now; we just made an aero change. If that doesn't change we will try something else mechanically."

TOMMY MILNER, NO. 4 CHEVROLET CORVETTE C6.R
ARE YOU ABLE TO FIGHT BACK FROM THE EARLIER TROUBLE?
"The car is quick. We're making the right calls. In the heat of the moment, I think I got Chuck (Houghton, engineer) a little wound up because I wanted to be clear with what I was supposed do. I was very clear with what I was supposed to do until Chuck called me in right in the end when I was supposed to stay out. I knew better and should have stayed out. That'll be really annoying if eight hours from now we're still one lap down. There is enough time where I think we'll have another opportunity. The car is quick. That part I'm not concerned about. If we desperately needed that lap, we wouldn't be in good shape. But we don't desperately need it yet. We have to keep turning laps and pounding around out there."

ANTONIO GARCIA, NO. 3 CHEVROLET CORVETTE C6.R
THAT WAS AN EVENTUAL COUPLE OF STINTS…
"It was quite a good stint. Luckily both the yellows came two-thirds or three-quarters into each of the stints so it wasn’t easy to make decisions on pit strategies and tires. We just did fuel on the first one and chose just right side tires and fuel on the second one. I got out again with no problem. The Porsche had four tires so he had an advantage. In the end, I was having some issues with some sudden oversteering. I thought there was oil on the track but it was me that was leaking water from the engine so I spun on my own water. It got worse and worse and we decided to stop to check everything. We are lacking a little power at top speed."

ARE YOU SURPRISED AT THE NUMBER OF CARS THAT ARE STILL IN THE RACE?
“There is a lot of traffic. It seems like it never goes down. It is very challenging. So far we have done one full rotation of all the drivers so you don’t know when you go by someone if it’s a slow guy. You just have to be careful."