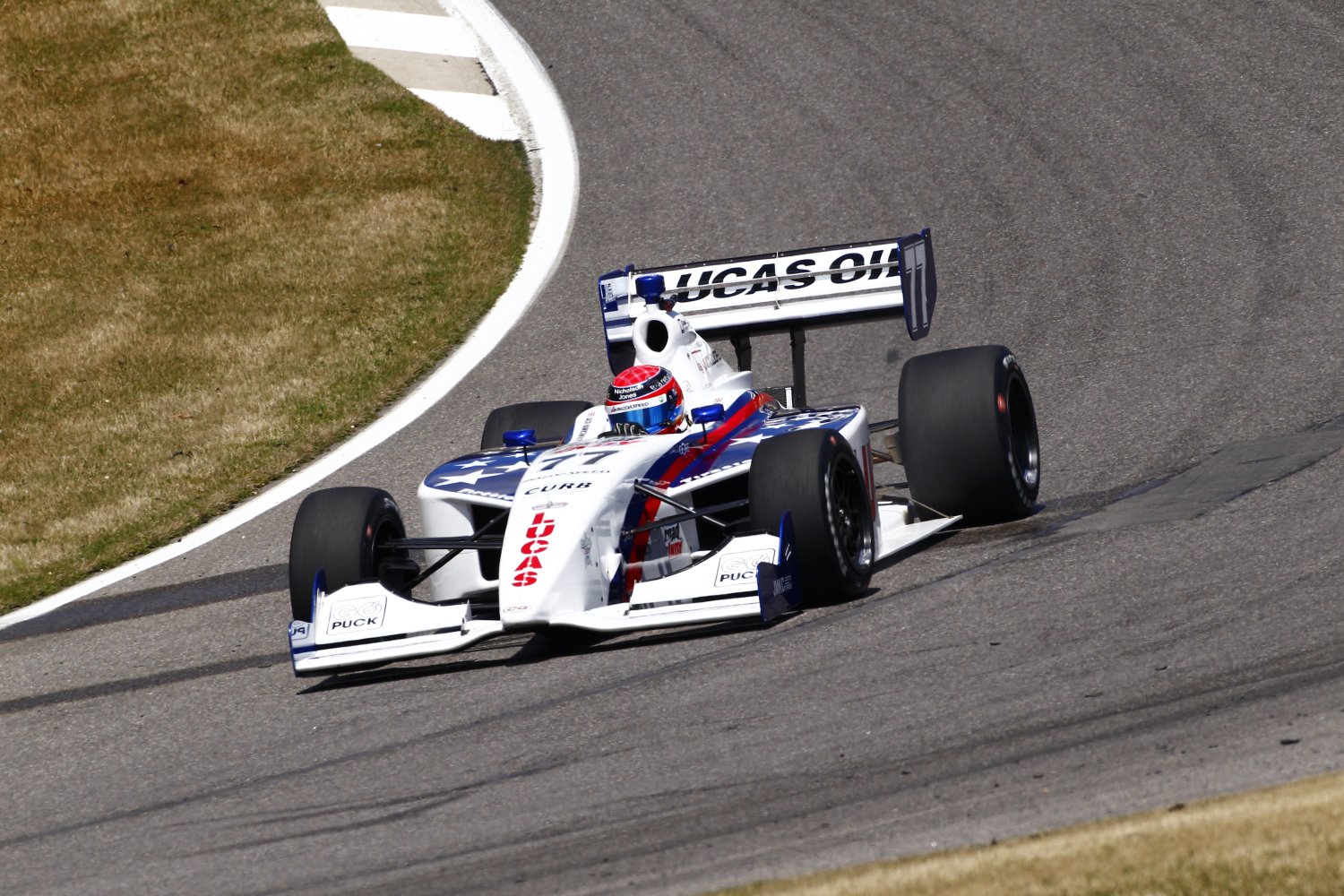 Suffice to say, the IndyCar world has not exactly been a flaming hot bed of news in recent weeks. Throw in frigid temperatures through much of the country, and still more than two months until the track goes green in St. Petersburg, and yes, this is what one might call the peak of the doldrums for an IndyCar fan.

And I’ll be honest: I don’t have the low down on who will fill the second KV Racing Technology seat, or whether the National Guard sponsorship will head to Rahal Letterman Lanigan Racing or remain with Panther Racing. Nor do I have anything of substance to offer with regard to where popular drivers such as Oriol Servia, J.R. Hildebrand, Conor Daly or Simona de Silvestro will land, if they do in fact, land anywhere in IndyCar.

But if you’re looking for something IndyCar related to chew on, you’ve come to the right place. Get this: No post-2001 graduate of Indy Lights has won a pole on a road or street course in Champ Car or the IRL (IndyCar) in the last seven seasons.

Now, before moving ahead let me add a few clarifications. Graham Rahal won the pole for the 2009 St. Petersburg race and made one Indy Lights start (2006 Freedom 100). However, Rahal’s primary development was via the Atlantics Series, and for the purposes of this discussion I’m speaking of those who have spent more substantial time in the Lights series.

You might make note of “Speedy" Dan Clarke. Remember, Clarke won the pole for the 2006 Road America Champ Car race, and would later run all but one of the Indy Lights races in 2010. So, I suppose Clarke could be considered a Lights graduate, although his pole oddly occurred four years prior to earning his Lights degree. And he has not won a pole or for that matter, made a start at the top-level since.

Let me also make clear, I’m not slamming Indy Lights or the Mazda Road to Indy. Actually, Indy Lights graduates have won poles on road and street courses aplenty in IndyCar in recent years, specifically Helio Castroneves (class of 1997), Scott Dixon (2000), and Tony Kanaan (1997). Oriol Servia (1999), Bryan Herta (1993), each won pole positions during the 2005 seasons in Champ Car and the IRL respectively. What I am calling attention to is the fact, no recent Lights grads have win road or street course pole positions. And that is because the most recent graduate of the Lights series (excluding Rahal, and the reverse career-path oddity that was “Speedy" Dan), to have earned a road/street course pole position in an Indy car series was, drum roll please:

Dominguez, of course, earned his first and only pole for Forsythe Racing at the 2006 Houston Champ Car race. And with IndyCar now weighted about 70% in favor of road and street circuits, the fact the Series has not produced a pole winner on the twisties in over a decade, highlights what has become something of an Achilles Heel for the recent graduates of Indy Lights.

Yes, James Hinchcliffe, Alex Lloyd, Josef Newgarden, Tristan Vautier, Ana Beatriz, Marco Andretti, J.R. Hildebrand, A.J. Foyt IV, Ed Carpenter, Jeff Simmons, Rafael Matos, Sebastian Saavedra, Charlie Kimball and a host of others have spent substantial time in Lights. In three cases (Andretti, Hinchcliffe and Kimball) they have found victory lane at the top-level on road and street circuits. Carpenter, of course, has won on ovals. Carpenter and Andretti have won poles on oval tracks. Others such as J.R. Hildebrand and Josef Newgarden have contended for victories. Hinchcliffe also is a good, although not great, qualifier.

So, I am not saying Indy Lights grads have brought the series shame.

I am saying they have shown an inability to find the limit and lay down that all important, hot lap when the time comes, as they have combined for exactly zero poles on road or street courses.

I’ve polled some people more intelligent on this particular matter than myself, and arrived at some conclusions.

One is somewhat obvious, in that other than a few exceptions many of the above drivers have not enjoyed the luxury of top-level equipment. For example, we could say J.R. Hildebrand has never won a road or street course pole, and that would be true. But it is likewise true that Panther Racing has never been the gold-standard team for IndyCar road and street course qualifying.

Further, many of the best Lights drivers have not for whatever reason received substantial opportunities. Jean-Karl Vernay won the 2010 Lights championship, yet never started an IndyCar race. 2012 champ Vautier looks as though he may fall off the IndyCar map after one season. Wade Cunningham, Matos and other champs have had cups of coffee in IndyCar if you will, but nothing one that would be considered a substantial opportunity with a top team.

Another, likely more telling explanation is the lack of seat time available to modern open-wheel drivers not only coming through the ladder in North America, but once they arrive at the top-level. Dixon, for example, often talks about the abundance of testing he was able to do for PacWest and Toyota during the height of the manufacturer wars in the CART days. Dixon learned how to manage fuel-mileage, and other elements of his race craft. He also was able to do what qualifying is ultimately about: finding the limits of the car.

Castroneves and the recently-retired Dario Franchitti also benefited from the less-restricted testing in those days, as did Kanaan to a lesser extent. With the economic changes in the sport, and testing restrictions, drivers nowadays often look for said limits during a race weekend.

Another element that should be noted is funding. While it’s difficult to quantify a driver’s level of funding, and how it compares to another driver, greater funding does allow the luxury of bending a little metal, so to speak. And bending a little metal is often a prerequisite to finding the true limits and capabilities of the car. For the simple reason that greater resources are necessary to reach the pinnacle of the sport in Europe, drivers in the European ladder often begin with greater backing than their North-American counterparts.

Also, European drivers train exclusively on road courses. And because in road racing qualifying is at a greater premium, drivers do not have the luxury of qualifying deep in the field and making up significant ground. No, qualifying at the front of the field is not a luxury, but a prerequisite to success, as an aspiring race car driver who fails to do so, will be forced to find another line of work.

So for a variety of reasons, drivers who cut their teeth in disciplines aside from Lights tend to be better road and street course qualifiers once they reach IndyCar.

And the best IndyCar qualifier of this era, Will Power, is one example of a driver who came to Indy car racing through cut-throat European junior formulae, specifically British F3 and World Series by Renault. Two other 2013 street course pole winners, Takuma Sato and Mike Conway, likewise cut their teeth in British Formula Three. Conway also did some time in GP2. Conway is of particular note, as he stepped into the Dale Coyne Racing car at Detroit this past year in a one-off for the doubleheader weekend cold if you will, before qualifying third and first for the two races.

Granted, it’s not as if Conway does this all the time. Still, Conway was able to find the limits of the car in an extraordinarily short period of time. This can probably at least in part, be attributed to his European junior experience, where a greater premium is placed on qualifying, and drivers are given more laps to find the limit.

Ryan Briscoe and Justin Wilson also provide illustrations. Briscoe, who has five career road and street course pole positions, did a stint in British F3. Justin Wilson, who has 8 career Indy car poles, all on the twisties, was of course, the 2001 Formula 3000 champion. Wilson and Briscoe along with Sato also had spells in F1 either as racers (Wilson and Sato) or test-drivers (Briscoe and Sato). And all three had the benefit of those seats prior to the introduction of significant testing restrictions. Sebastien Bourdais, who has 29 career road and street course poles (although none since 2007), and won the 2002 Formula 3000 title, is another example of a driver who benefited from the cut-throat European ladder.

Bourdais would also again, be someone who came-of-age during the late 1990s and early 2000s, when the restrictions on testing were not what they are now. Also, with regard to Indy Lights, the evidence shows open-wheel ladder hopefuls clearly benefit from greater seat time in the European junior formulae, relative to those who climb the ladder in North America.

Now, that’s not to say those who climb the ladder in North America can’t be successful. After all, the best active IndyCar driver Scott Dixon was a Lights product. More recently, Indy Lights has made some strides in getting its top drivers IndyCar rides. And men such as Hinchcliffe, Andretti, and Kimball have found victory lane.

Still, one thing that clearly hampers recent Road to Indy graduates is a lack of qualifying pace on the road and street courses. Sure, guys like Hinchcliffe and Newgarden have shown the ability to move through the field and score strong results. For example, Newgarden started 25th at Sao Paulo before finishing fifth. He started 18th at Houston 1 and also finished fifth.

And maybe, Newgarden and Hinchcliffe haven’t had the same advantages enjoyed by others. Certainly, in the case of Newgarden he is not with a top team.

But the extraneous factors aside, we know this: if the recent MRTI graduates are ever going to take that next step, finding out how to extract more from that one, hot lap is a very good place to start.