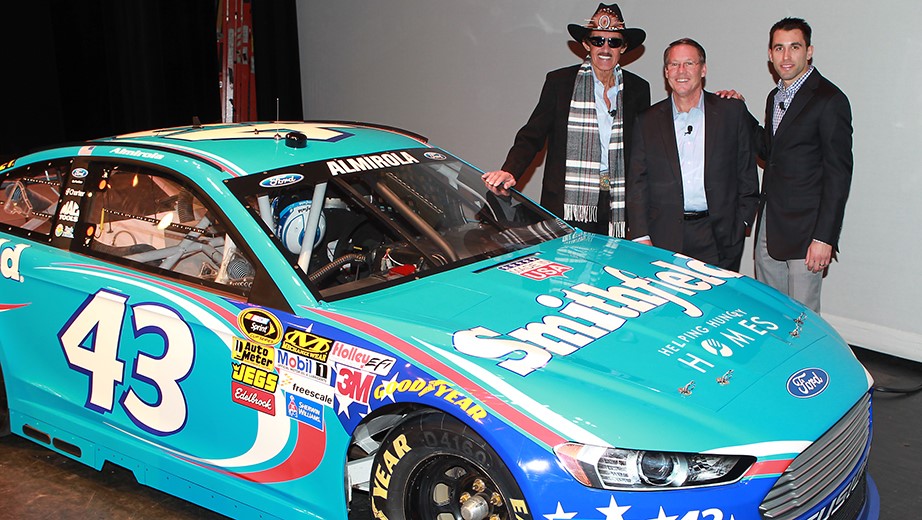 King Richard Petty's famous smile got a little wider and a little brighter following a January 15th press conference where an announcement was made regarding a major contract extension from a primary sponsor for Richard Petty Motorsports.

The company and its family of brands, including Eckrich, Farmland, Gwaltney, Nathan's and Smithfield, will return as primary sponsors of the legendary #43 Ford Fusion driven by Aric Almirola in the NASCAR Sprint Cup Series for 29 races in 2014 and beyond under a contract that extends through the end of the 2016 season. The agreement increases support from 15 events in 2012 and 25 in 2013 to 29 events in 2014-2016.

The partnership with Richard Petty Motorsports and the NASCAR Sprint Cup Series has been a very effective marketing platform for the world's largest pork processor, with in-store promotional activities and tie-ins yielding successively incremental sales results.

"I believe in the power of NASCAR and Richard Petty Motorsports. My challenge to RPM was to help Smithfield connect our brands with the sport's 80 plus million fans," commented Larry Pope, President and CEO of Smithfield Foods. "Our results completely validate our participation."

Swan Racing announced the addition of Anthony Marlowe as a minority owner. Marlowe, a successful business leader from Iowa City, IA, has been involved in NASCAR as a sponsor with different teams since 2011. His leadership and his experience with business-to-business deals will be increasingly valuable to the team as it seeks additional partnerships.

"Anthony is an entrepreneur like me," said team owner Brandon Davis. "He has the same work ethic and the same approach when it comes to finding creative and innovative solutions. Anthony is the perfect fit for the team and will be an integral part of it going forward."

"This is a remarkable day, which for me marks the intersection of my passion for NASCAR and my dream of owning part of a professional sports team at the highest level," said Marlowe. "I kept a close eye on Swan Racing during its inaugural season last year and was so impressed with Brandon Davis, the way they do business, and their pursuit of excellence that I wanted to be part of his Cup team for the long-haul."

Brandon Davis purchased the team back in 2012. He will field two teams in the 2014 season for young, up and coming, drivers Cole Whitt, #26 Toyota, and Parker Kligerman, #30 Toyota. Both drivers will be competing for the 2014 Rookie of the Year title.

Saying it will offer NASCAR racing fans the most complete experience yet, Deep Silver announced that the racing game NASCAR '14, developed by Eutechnyx, will launch in North America on February 18, 2014 on the Xbox 360 games and entertainment system from Microsoft, the PlayStation3 computer entertainment system and PC for the suggested retail price of $49.99. Pre-order offers at Walmart, Gamestop, Best Buy, Target and Amazon may include diecast cars, exclusive paint schemes and more.

Recently NASCAR revealed that more than 700,000 votes were cast worldwide in the "Drive for the Cover" contest as fans voted Tony Stewart, the three-time NASCAR Sprint Cup Series champion, to appear onto the cover of NASCAR '14. The injury that kept Stewart off the track didn't stop fans of the driver of the #14 Bass Pro Shops / Mobil 1 Chevrolet for Stewart-Haas Racing from beating another fan favorite, four-time champion Jeff Gordon.

IT'S A USED CAR BONANZA AT KYLE BUSCH MOTORSPORTS

Two of Kyle Busch's personal collector cars are set to be auctioned off this weekend as part of Barrett-Jackson's 43rd Annual Scottsdale Auction. Busch's vehicles, a Velocity Yellow 2006 Z06 Corvette and an Orange 1969 Camaro SS, are scheduled to roll across the auction block this Sunday, Jan. 19, during Fox Sports 1's live coverage from 5:00-7:00/pm/et.