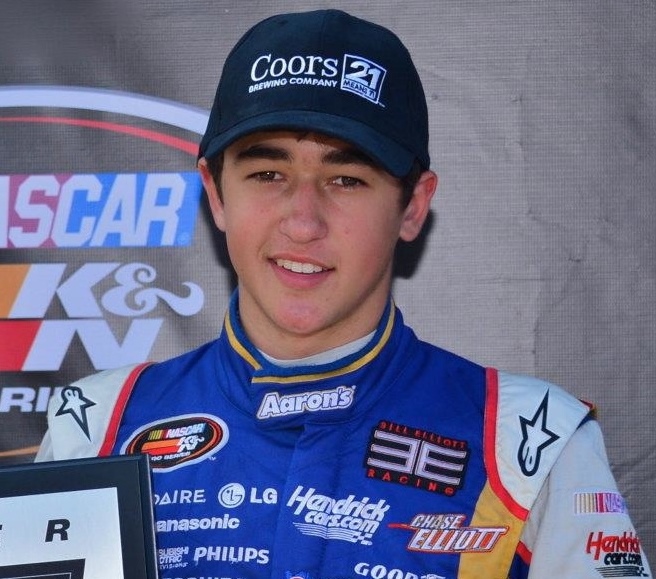 The recent announcement that said NAPA Auto Parts was the new primary sponsor for rookie driver Chase Elliott and his new ride for JR Motorsports, in the NASCAR Nationwide Series this year, is a win-win situation for all involved.

First off, NAPA's marketing division will be doing business with a group of very prominent individuals. Chase Elliott is already recognized as an up and coming future star in NASCAR racing. He'll also be receiving advice from his father, and a true mentor, NASCAR champion Bill Elliott. Then there's the matter of the very high profile principal ownership of JR Motorsports also participating in this new racing partnership. That would be Dale Earnhardt Jr, Kelley Earnhardt-Miller and Rick Hendrick.

Also of very noteworthy interest is the fact that NAPA will be making another investment in one of NASCAR's big three national touring series for the 19th consecutive season. More than 85 years ago NAPA, the National Auto Parts Association, was created to meet America's growing need for an effective auto parts distribution. There are now over 6,100 NAPA stores nationwide serviced by 64 strategically located distribution centers serving all 50 states.

Over the years, NAPA used motorsports as a means to promote their stores. The impact was both immediate and rewarding. This especially true of their marketing campaigns in the NASCAR Sprint Cup Series and the National Hot Rod Association. From these two racing formats came the outstanding, and well remembered, "NAPA know how" ads. NAPA also plays a prominent role in regional racing series, local race tracks, and the teams that race there, as well as sponsoring race purses. NAPA and motorsports was a marketing match made in heaven from the very beginning.

Those well planned marketing matches certainly included Michael Waltrip Racing, (MWR). NAPA signed on with Michael Waltrip's brand new Sprint Cup Series operation from the very beginning. Unfortunately, that marketing match up hit a major speed bump in September of 2013 at the conclusion of the race in Richmond-Virginia. Richmond was the final race of the regular season and, of greater importance, the event that determined the official line up for NASCAR's 12 team line up for the 2013 Chase For The Sprint Cup Championship.

The aftermath of this event has been well documented. Sadly, it became THE story of the 2013 season. MWR was accused by NASCAR of manipulating the outcome of the race. The result were heavy fines, suspensions and the loss of driver and owner championship points. The loss of the points hit MWR the hardest because it eliminated MWR driver Martin Truex Jr, and his NAPA Toyota, from the Chase line up.

Needless to say, the negative publicity from this situation was huge and NAPA was incensed over being caught up in the fall out. In the days that followed the Richmond race, Gaylord Spencer, NAPA Vice President of Marketing Strategy issued the following press release:

"NAPA announced today that, after due consideration, it has decided to end its sponsorship arrangement with Michael Waltrip Racing (MWR) effective December 31, 2013. As many of you are aware, NASCAR determined that MWR attempted to manipulate race results at Richmond, Virginia, on September 7, 2013. NASCAR assessed a large fine, deducted 50 points from each of the three MWR drivers in the race and suspended or banned other members of the MWR team.

NAPA believes in fair play and we are very disappointed in the actions that led to the NASCAR penalties. We have made NAPA's decision known to MWR and posted a statement on our Facebook page. There will be significant media coverage and discussion among racing fans and we expect that our decision to terminate our sponsorship will generate additional attention. The decision was difficult, but we believe is the right thing to do.

We appreciate in advance your support of our marketing efforts. We will continue to evaluate our future position as it relates to motorsports."

Waltrip said he was disappointed in the decision that concluded a long running marketing partnership with NAPA and expressed gratitude for the many years the two companies worked together. At the same time he maintained that MWR in no way devised a master plan to manipulate the Richmond race adding he "was not overly surprised by NAPA's decision."

Essentially what all of this meant was one of the most lucrative sponsorship programs in NASCAR racing was now suddenly available. NAPA officials also found themselves in the unfamiliar position of being a hot topic in the rumor festival known as "the silly season." Traditionally the focus of NASCAR's silly season is largely aimed at drivers who may, or may not, be seeking a new ride. Very often high profile crew chiefs are also caught up in the silly season as well.

However, it's very rare for a sponsor to find themselves riding this rumor cycle. Some of the silly season rumors involved NAPA included the following:

NAPA officials reportedly said they would not be sponsoring any NASCAR teams this year and would be spending the 2014 season rethinking their sponsorship and marketing plans.

NAPA had made it clear they were not interested in sponsoring a team from NASCAR's Nationwide or Camping World Truck Series.

In the latter part of the 2013 season, it was announced that Nationwide Insurance would not be returning as the title sponsor for NASCAR's Nationwide Series. The silly season indicated that NAPA had been approached to take over this title sponsorship which they reportedly declined.

There was a rumor that claimed a NAPA official said the company only wanted to sponsor a NASCAR Sprint Cup team for a full year. That led to an additional rumor that said NAPA was considering following former MWR driver Martin Truex Jr, whom they really like, to his new ride in the #78 Furniture Row Motorsports Chevrolet.

In mid November came a rumor of a meeting between NAPA officials, Rick Hendrick and Kelley Earnhardt Miller along with Chase and Bill Elliot at the company's Atlanta-Georgia headquarters. This rumor died on the silly season grapevine due to an overall lack of follow up.

Oddly enough, this was the one NAPA related silly season story that turned out to be true. The result of that meeting led to the following January 6th press release from JR Motorsports:

Chase Elliott will compete full time in the NASCAR Nationwide Series for JR Motorsports starting in 2014 and do so with NAPA AUTO PARTS as his full-season primary sponsor. With Elliott as its driver, the 2014 season… will mark NAPA's 19th year in NASCAR sponsorship.

NAPA headquarters is in Atlanta, Ga., just a short distance from Elliott's hometown of Dawsonville, GA. "NAPA is pleased to continue its long standing involvement in NASCAR, the most popular form of motorsports in the United States supported by its many loyal and passionate fans," commented Dan Askey, President of NAPA. "Equally, we are proud to form this new partnership with JR Motorsports. Kelley Earnhardt Miller, Dale Earnhardt, Jr., Rick Hendrick and its many employees have developed one of the premier teams in the Nationwide Series.

Chase Elliott is a young and talented, future star in the sport and will represent NAPA well both on and off the track. We welcome Chase and the entire JR Motorsports organization to the NAPA Family."

Elliott will carry the #9 on his NAPA Chevy – the same number his father, legendary racer Bill Elliott, carried for much of his storied career that included the 1988 Sprint Cup Series championship. The 2014 season will mark the younger Elliott's Nationwide Series debut. He turned 18 on Nov. 28, becoming eligible for competition.

"This is the opportunity of a lifetime," Chase Elliott said. "My family and I are still trying to believe it all. I couldn't ask to be partnered with anyone better than Dale Jr., Kelley and Mr. Hendrick, along with all of the people at their organizations who have put in countless hours to pull this together."

Again, this is a potential win-win for all parties involved. A tip of the racing hat goes to everyone who played a role in putting this lucrative marketing plan together and thank you NAPA Auto Parts for your years of supporting racing from the local to the national level.