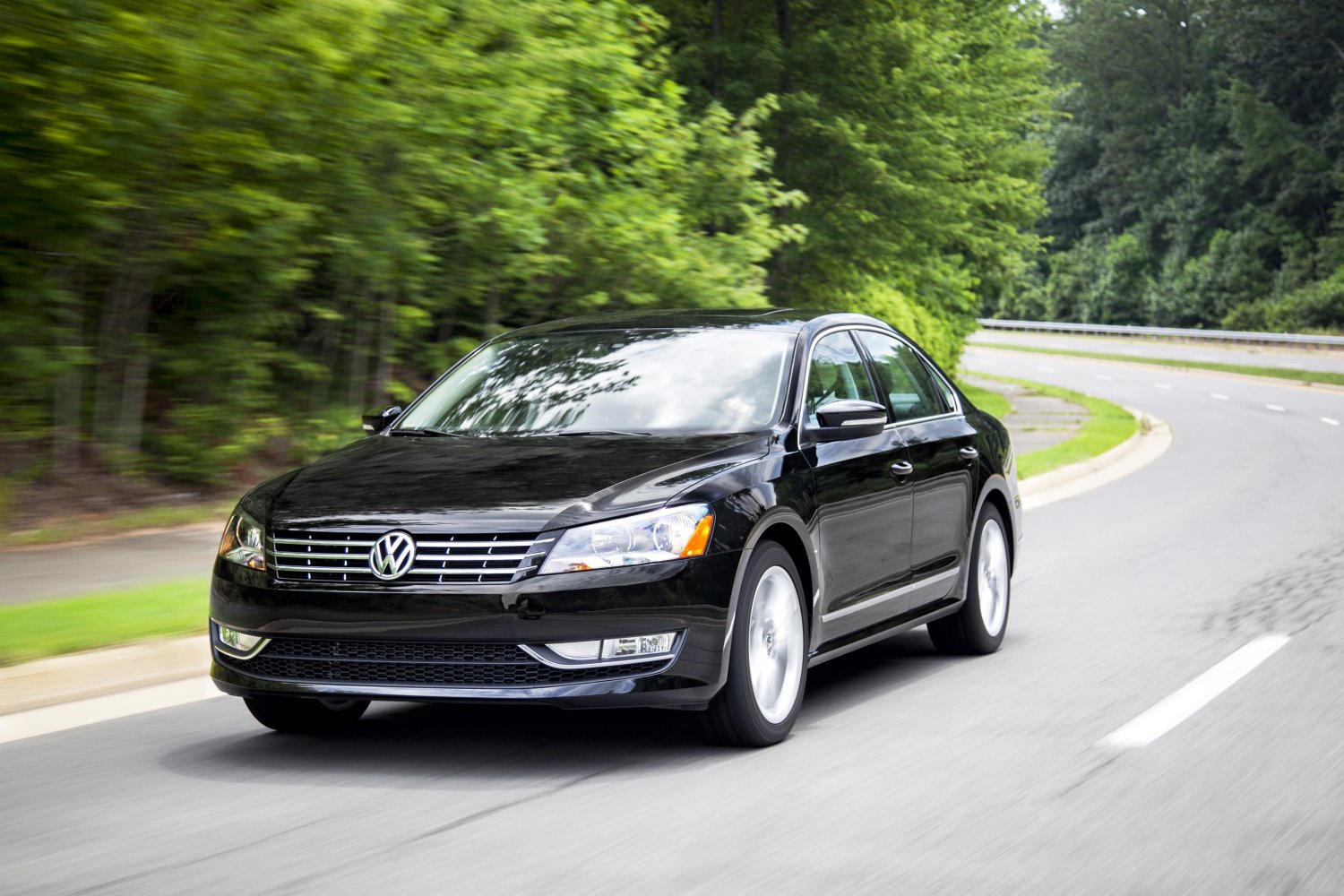 Let’s say that you are in the market for a family sedan. Your heart wants a BMW or Audi but your wallet only allows you to look at Accords and Camrys. It may be time to look at Volkswagen’s Passat because it could be one of the best all-around sedans in the US. It has the feel of the expensive other German brands but at much more friendly prices. We got our hands on a 2014 Passat SEL TDI to see if it is as good as we thought and we were very impressed.

One of the worst features about the Passat is its styling. It has been made to please as many people as possible and not offend anyone. Because of that, it is rather boring and plain looking. At least, the good news is that you can get a couple of vibrant color options when selecting your Passat beyond the same old silver and white. Volkswagen calls the styling “elegant and timeless" which means it is stale and dull. But at least it is not ugly and it will not look old ten years from now.

Inside the Passat is a different story with a very clean styling that looks rich and well finished. The Passat was designed and specifically tailored for American tastes and American lifestyles. So the cabin of the 2014 Passat delivers space, and plenty of it. There’s room for five adults to really stretch out in comfort. And with four large, wide-opening doors, getting in and out is a breeze. The rear leg room is almost limousine like even with large adults seating in the front seats.

There’s also a true elegance and simplicity about the layout. Nothing here is trendy or over-done. The lines flow in a style that’s easy on the eye, complimented by high-quality materials applied with attention to detail. Chrome-trimmed gauges surround a digital multifunction display with very clean and clear gauges in perfect view of the driver.

The seats are exceptionally comfortable, with an emphasis on providing extra thigh support for long-distance road trips. Even in the base version, the driver’s seat adjusts eight ways, including lumbar, while most models featur4e eight-way power adjustment. Inviting cloth trim is offered with the base S model, while the Wolfsburg and higher trims feature Volkswagen’s characteristic perforated V-Tex leatherette seating surfaces. Two-tone seating is offered on SE models, and SEL models move up to leather seating surfaces. Our SEL has the leather seats which were fabulous and felt great but the inside portion of the seats is not leather but something that Volkswagen calls Dinamica which feels more like suede. It feels great but we feel that the leatherette will probably age better and show less wear. Our car also had the Fender premium stereo system that cranks out 400 watts of power through nine speakers and a trunk mounted subwoofer. The stereo is fantastic and helps pass the miles with ease on those long trips.

The best part of the Passat is the drive itself. There are four engine options in the US on the Passat. The entry level engine is the 2.5 liter five cylinder that puts out 170 hp. The next step up is a 1.8 liter turbocharged four cylinder that puts out the same 170 hp. If you need more power, a 3.6 liter V6 is available that gives you a solid 280 hp.

The first two engines use regular fuel while the V6 requires premium fuel. The best engine in the Passat is the engine in our car which was the Clean Diesel TDI that only puts out 140 hp but feels so much stronger thanks to its 236 lb-ft of torque at only 1750 rpm.

The diesel engine is so quiet and smooth that you would not even know that it is a diesel until you go to fill it up which will not be very often. We easily saw mileage numbers of over 50 mpg on the freeway with the TDI and that was driving at the same speed as the rest of the traffic.

The TDI engine really matches the rest of the Passat with its solid structure and quiet cockpit on the freeway. This is a car that can get you there on long trips with ease and you will not be tired. The 18.5 gallon tank also gives you a tremendous range of around 700-800 miles which is incredible.

Another great aspect of the Passat is the price. Our fully loaded Passat SEL TDI was priced right around $33,000 which is basically the same as the Asian competition. However, the best Passat would be the lower level SE with the TDI engine and six speed manual transmission that goes for $26,000. That is one of the bargains of the year. Also sweetening the deal is that every new Passat comes with a free two year maintenance program where all maintenance items are taken care of by your dealer for free.

A fun to drive sedan with tons of room, a huge trunk, fantastic fuel economy, and solid feel for the same price as an economy car. Hurry to your VW dealer before they figure out their error in pricing this car.