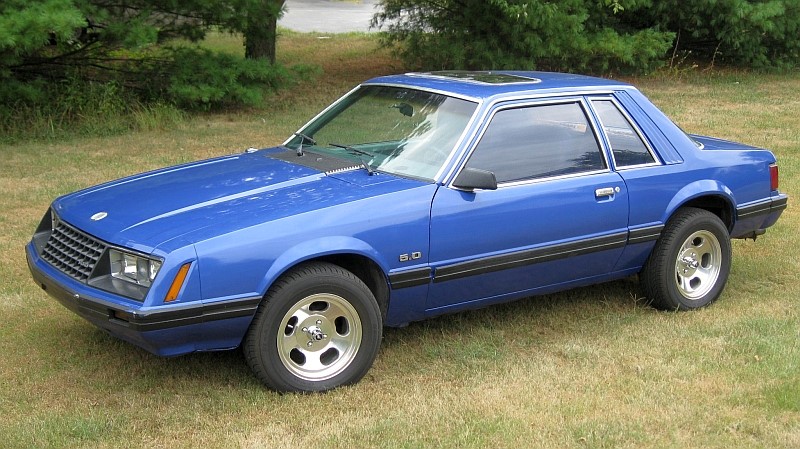 I am proud to own one of the most incredibly rare Ford Mustangs ever built… the 1980 Mustang GL.

Now you know why my Mustang is so rare. As you can see, I have very little to lose no matter how this rebuilding project turns out.

But fear not. My poor old pony has a few small bragging points worthy of note.

First of all, it is two-door coupe with a genuine trunk. The “Notchbacks," as they are known today, are emerging as the most desirable Fox body Mustangs of the 1980’s. They have a unique beauty that surpasses the aesthetics of the more common hatchback models, and they are getting extremely difficult to find.

Secondly, my Mustang GL was originally ordered with a manual transmission. The clutch pedal remains in place with all bracketing, thank goodness. At least I’m not starting with a slushbox.

And thirdly, this car has one vital element that makes it utterly irreplaceable… sentimentality. I bought this car when I was seventeen. It made me the coolest kid in high school because none of my classmates knew anything about performance. I even took my future wife on fancy dates in this car. You just can’t put a price on that. Well, actually you can since I saved most of the receipts.

The 15-year-old PPG Mica Blue paint is still in acceptable condition. We’ll fuss over that later. The 500-watt Pioneer stereo system is fantastic and will remain with the car. The interior is rotted and totally shot… that project is next on the hit list. The sloppy Fox platform will also eventually require the usual structural and suspension improvements, starting with sub-frame connectors and the like.

But for now, we’re installing an entirely new drive train. My good friends at McGunegill Engine Performance have sponsored my racecars for several years and are abundantly qualified to engineer this part of the project.

I specifically asked McGunegill to start with a standard Windsor block out of respect to Mustang tradition. The Mustang’s connection with Ford’s small block 302 is legendary and I want to honor that lineage.

Company owner DeWaine McGunegill asked me if I wanted, “Oh, maybe six hundred horsepower." After all, he is a racing guy. I politely declined, wondering what on earth I would do with the other two hundred horses once I broke the sound barrier. We decided on something slightly milder.

A Blue Oval cam, Scorpion roller rockers, Ford Racing intake, headers and a handful of other goodies will push the dyno needle past four hundred horsepower and still run on pump gas. That’s streetable power, and that’s what I want. In final form, the engine will be stroked to 347 cubic inches and will be a real screamer between 3000-4500 rpm’s.

DeWaine also wanted to know what the engine should sound like, which was a really cool question to ask. My answer was simple. The most beautiful engine sound I ever heard was the low, rumbling idle of my first 1971 Ford Torino 302 V8 with new Glass Pack mufflers. It had a deep, soft rumble and would pop like fireworks when you let off the accelerator at high revs. DeWaine nodded slowly, fiddling with his pen and noting everything I said.

Although my Mustang GL was originally equipped with a four-speed Top Loader, we decided that a newer T-5 transmission would offer a better gear ratio and an overdrive to make interstate cruising more enjoyable.

The rear end will have to be changed as well. The existing 2.73 differential obviously has to go. We figured that a 3.73 Traction Lok rear end would really bring the 347 Stroker to life and be lively off the line. I’m not overly concerned about driving at wild top speeds. I just want the car to be responsive and fun from a standing start to about 60 mph. The 3.73 should fit the bill perfectly.

So there ya go. Our rebuilding project has begun, and Those Way Cool McGunegill Guys are already well on the way to completing my new 347 Windsor small block.

I’ll keep you posted every step of the way. When we’re done, maybe I’ll be the proud owner of the 1980 Mustang GL that Ford should have built all along.