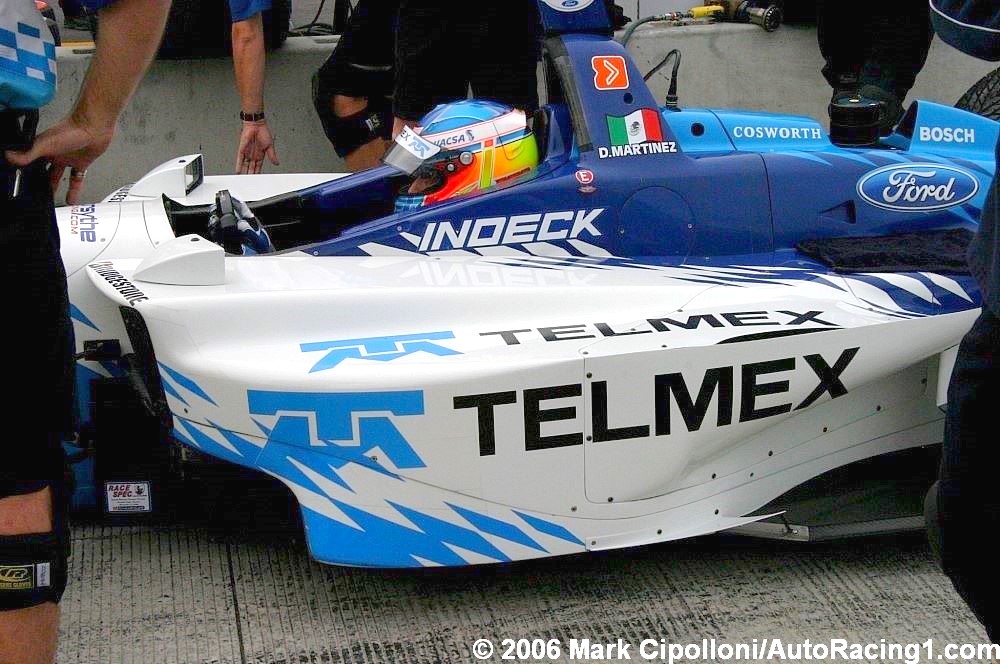 Prior to the 2006 season, IndyCars ran on methanol. With encouragement from the ethanol industry, IndyCar switched to ethanol to bring in much needed sponsorship dollars.

Pure methanol had been used in open wheel auto racing since the mid-1960s. Unlike petroleum fires, methanol fires can be extinguished with plain water. A methanol-based fire burns invisibly, unlike gasoline, which burns with a visible flame.

If a fire occurs on the track, there is no flame or smoke to obstruct the view of fast approaching drivers, but this can also delay visual detection of the fire and the initiation of fire suppression. The decision to permanently switch to methanol in American IndyCar racing was a result of the devastating crash and explosion at the 1964 Indianapolis 500, which killed drivers Eddie Sachs and Dave MacDonald. In 2007 IndyCars switched to ethanol.

The use of methanol as a motor fuel received attention during the oil crises of the 1970s due to its availability, low cost, and environmental benefits. By the mid-1990s, over 20,000 methanol "flexible fuel vehicles" capable of operating on methanol or gasoline were introduced in the U.S. In addition, low levels of methanol were blended in gasoline fuels sold in Europe during much of the 1980s and early-1990s.

Automakers stopped building methanol FFVs by the late-1990s, switching their attention to ethanol-fueled vehicles. While the methanol FFV program was a technical success, rising methanol pricing in the mid- to late-1990s during a period of slumping gasoline pump prices diminished the interest in methanol fuels. However, that dynamic has now changed.

Methanol is readily biodegradable in both aerobic (oxygen present) and anaerobic (oxygen absent) environments. Methanol will not persist in the environment. The half-life for methanol in groundwater is just one to seven days, while many common gasoline components have half-lives in the hundreds of days (such as benzene at 10–730 days). Since methanol is miscible with water and biodegradable, it is unlikely to accumulate in groundwater, surface water, air or soil.

A very misunderstood chemical, even reasonably informed people have some common misconceptions about methanol. Claims of toxicity and explosiveness are common. However, the toxicity and explosiveness of gasoline does not seem to be mentioned in comparison. Corrosiveness is another issue that comes up, but many modern engine components are accommodating to alcohol, and replacing parts that might not be compatible is relatively simple and low cost. Aside from that, simply using an M85 blend eliminates these issues.

Methanol versus ethanol would be the next question. How do they compare? First of all, methanol is significantly cheaper to produce and requires no government subsidies to be competitive. Ethanol has had the benefit of government subsidies to the tune of nearly 45 cents per gallon. Well, those are gone now. Methanol also burns cleaner than ethanol. Ethanol production requires a fermentation process that methanol does not. Methanol can be made from a much wider variety of sources as well with modern gasification and formation processes that do not apply to ethanol.

The biggest advantage for America, is that no individual source would have total control over the price of what we put in our tank. If natural gas got too expensive, we could simply start making it out of coal or biomass. There is even a process that makes it out of sequestered waste CO2 and is currently being done at a plant in Iceland. With the US government seeking to reduce CO2 emissions and requiring the capture of CO2, a waste product can be used to make fuel for transportation. The possibilities are virtually endless.

China recognizes the need to maintain energy independence, and uses methanol as a gasoline replacement and some estimates peg their usage at nearly 10% of their fuel usage, and growing fast. Utilizing their large coal resources, they are the worlds largest adopter of methanol as a vehicle fuel, and the world's largest methanol producer.

So let's think about what it would take for an alternative fuel such as methanol to take hold in America. Well, at first look, it seems simple enough. You have to give the consumer what they want. What do they want? That's pretty easy to agree on as well. They simply want a cheaper fuel that doesn't require them to make an investment choice or really think about. They also need to be able to buy it without any real inconvenience.

A startup venture out of Hoover Alabama…of all places…seems to have the answer. One of the largest methanol producers in the USA agrees, and is tossing in their dollars to help get it going. The venture is called Crimson Fuel and their mission is unapologetically bold. They want to change the world, starting here in the USA by making a switch to methanol an offer that’s too good for consumers to refuse.

Their plan utilizes a patented conversion kit that is designed to allow any car to run on both gasoline and/or methanol. That's right. Nothing changes for you. You just put either gas or methanol in the tank at any time and drive away. No separate tank or switching, because the free kit handles the mixture before it reaches the fuel computer in the car’s fuel system.

All testing and road use thus far has shown no damage to any vehicles and would be installable on most any car made in the last 15 years or so. Suffice to say a vast majority of the cars on the road they can convert. You can add gasoline to the tank at anytime. The conversion handles any mixture in the tank of alcohol and gasoline. That's the whole point really, because Methanol stations are not yet on every corner.

Now, methanol does reduce your mileage by about 30% (so does ethanol by a similar margin) but the cost is so low that you still spend about a dollar less for the equivalent miles you get from a gallon of gasoline. Even though you use a little more methanol to go the same distance, that amount of methanol still costs less than the gasoline by a significant amount. So your life might change by going to fill up a couple more times a month.

But that's about it. In the end, you are spending less and helping America. Eventually however, as the consumer demand grows, manufacturers will produce cars that get the same mileage as they do with gasoline, taking advantage of the thermal efficiency advantages of methanol.

The European Fuel Quality Directive allows up to 3% methanol with an equal amount of co to be blending in gasoline sold in Europe. China uses more than one billion gallons of methanol per year as a transportation fuel in both low level blends used in existing vehicles, and as high level blends in vehicles designed to accommodate the use of methanol fuels.

As methanol is adopted and used by consumers, manufacturers will of course object and refuse to honor the engine warranty, which is why Crimson Fuel will include a supplemental warranty for every car they convert.

So how much does the conversion cost? Absolutely nothing. They are going to convert your car for free. They don't care about the conversion. They want to sell you the methanol.

This reminds me of how inkjet printers are marketed. They all but give them away and make money on the ink. It all seems to make way too much sense.

With a plan like this, this seems like an alternative fuel push that makes way too much sense, and it doesn't require any government incentives. It’s all based on giving the consumer what they want.

They want an affordable, domestically sourced fuel that creates energy independence for America and our homeland security. What they don’t want is to have to change their lives to get it. Crimson Fuel aims to simply give the consumer exactly what they want. With a plan to build the demand from the consumer side, it seems that Crimson Fuel might just have found the way to make this work. It certainly is worth keeping an eye on.

Crimson Fuel is currently accepting inquiries from interested investors to fund their growth, and has just launched an indiegogo.com crowd funding campaign that can be viewed via this link.

We at AR1 feel that it's not only time for IndyCar to go back to methanol, but for all of America to make the switch in the best interest of our economy and energy security.