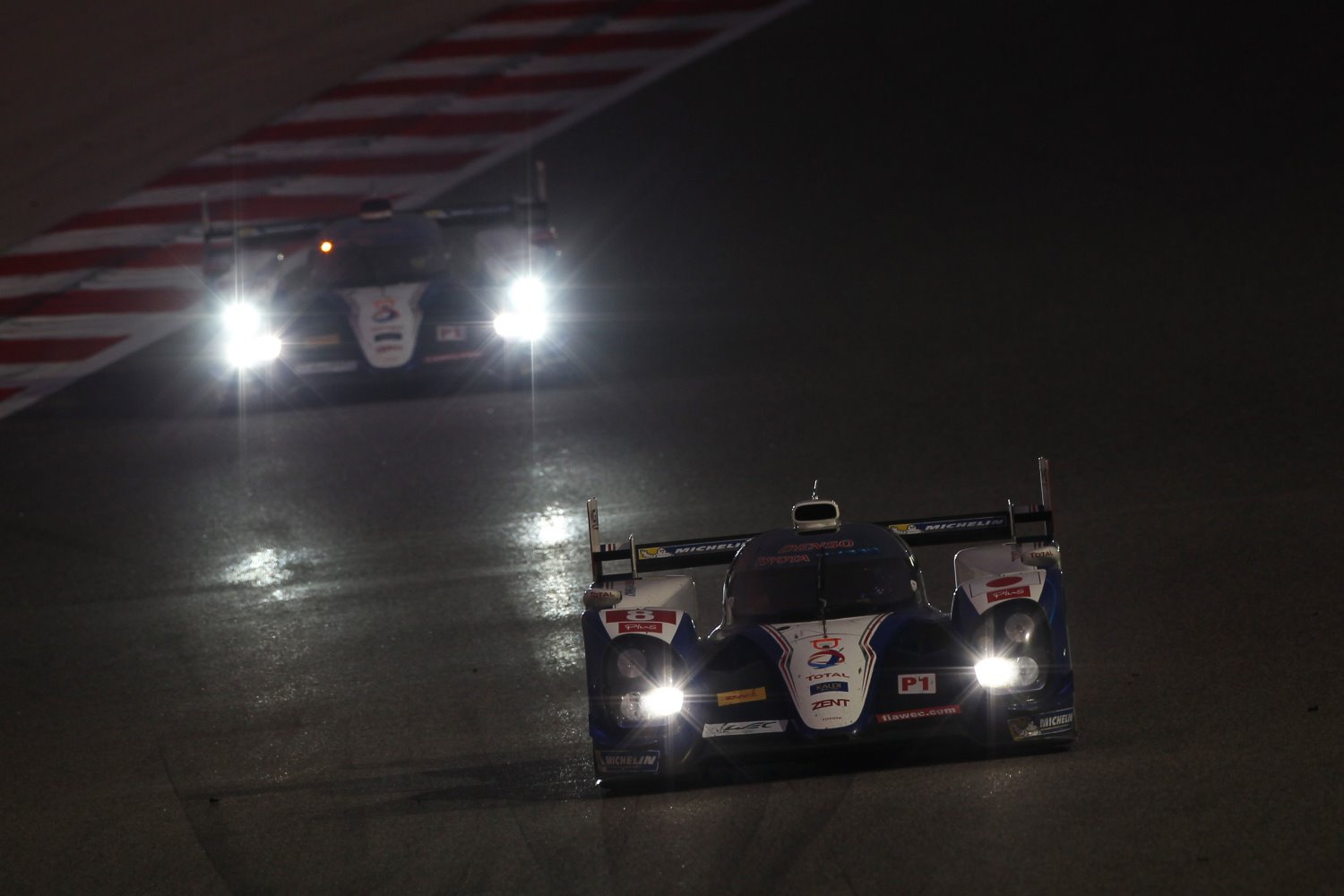 The #8 TS030 HYBRID of Anthony Davidson, Sebastien Buemi and Stephane Sarrazin secured their first win of the eight-race season after a commanding performance at the Bahrain International Circuit.

However, there was disappointment for the #7 car of Alex Wurz, Nicolas Lapierre and Kazuki Nakajima. Having led for the first hour, Alex was running second when an engine problem, caused by an oil leak, prematurely ended his race.

Nicolas started the race from pole position with Sebastien alongside and the pair set about building a lead over the chasing pack.

Just after the hour, Nicolas was delayed in traffic which allowed Sebastien to claim the lead. The pair ran nose to tail and then made their second pit stops a lap apart, handing over to Alex and Stephane respectively.

That continued until the two-hour mark when the race abruptly ended for the #7 when the technical issue struck just as Alex crossed the line to complete his 64th lap.

Stephane was therefore left with a clear lead which he extended before handing over to Anthony just after half distance.

A controlled double stint established the #8 firmly in control of the race and Sebastien took the wheel for the final 80 minutes, taking the checkered flag to win by over a minute.

Until shortly before the race’s midpoint, Audi Sport Team Joest was in a promising position in the final 6-hour race of the year. Loic Duval/Tom Kristensen/Allan McNish (F/DK/GB) in the Audi R18 e-tron quattro, with a gap of about 15 seconds, were running within striking distance of the leading Toyota. Then, on lap 95, Duval reported a problem in the power transmission system over the radio. For the first time in 23 races which the various Audi R18 models have completed since 2011, a technical defect resulted in retirement.

After the final race of the season, TOYOTA Racing’s 2013 total reads 152.5 points for second in the Manufacturers’ Championship, two wins, six podiums and three pole positions.

In the drivers’ championship, the #8 crew scored 106.25 points for third in the standings while Alex and Nico are fourth with 69.5 points having competed in six of the eight races. Kazuki, who competed in four races, scored 37.5 points.

Today also marked the 14th and final race for the TS030 HYBRID since its debut at Le Mans last year. Since then it has achieved five pole positions and 10 podiums, including five wins.

Alex Wurz: “Obviously it is disappointing to end the season like that. During my stint I looked after my tires well and it was a nice fight for the lead; I was catching Stephane. Everything felt good but then I heard a noise, smelt oil and then had no drive. I pulled to the side of the track and it was game over. I am sorry for the team because we did a good job this weekend."

Nicolas Lapierre: “I am very disappointed because it was looking good. I had a good start and then together with Sebastien we could pull away. I had a little incident in traffic and lost the lead. But I was just behind Sebastien and the two cars were very strong. Then I gave the wheel to Alex and unfortunately we had this problem. It is not the way we wanted to finish this season but we showed the car was very competitive which is encouraging for next year."

Kazuki Nakajima: “We were doing a really good race and in a close fight with our sister car. Unfortunately we had an engine problem and this put us out. It is a pity I could not drive the car but that’s racing. I think this year we have had a fair bit of bad luck; I hope we are saving some luck for next year."

Anthony Davidson: “It was fantastic to end up on the top step of the podium. I am so happy for the team to get our first proper victory of the year. Obviously the #7 won in Fuji but the conditions were unusual that day with the rain. Today’s result is completely justified after what happened in Shanghai when we were leading comfortably but had to retire due to a technical problem. We had the speed all weekend here and it’s great to finally win my first race for TOYOTA Racing."

Sebastien Buemi: “I’ve had to wait to win my first endurance race so I am really delighted with today’s victory. It is a reward for the whole team after a hard season. I am so happy with the result; now we can all go home and enjoy the winter a bit then focus on next year. To finish the season with a win was really important to show the car was competitive. We are still quite new to endurance and I think we can be proud of this win and work hard next year to achieve more."

Stephane Sarrazin: “It was an amazing race for us. I have been waiting a long time to win a race with Sebastien and Anthony. We had a great weekend, without mistakes. We were fast all weekend and in the race our set-up was very good. We could control the race and I felt happy in the car; I felt we would win it. I am delighted because we did our best since the beginning of the season. It is like a dream; the team did a brilliant job and I’m so pleased to be part of it."

Yoshiaki Kinoshita, Team President: “This victory has a special meaning for us because this it is the last race of the season and we won. Our win was not down to luck; our performance was better than our competitors so from this point of view I am very happy. Also we could show our real performance to the wider world; something that hasn’t necessarily been reflected in the results in the last few races. I would like to thank all the team for their never-ending hard work throughout the season; it was a tough year but we have finished in a fantastic way."