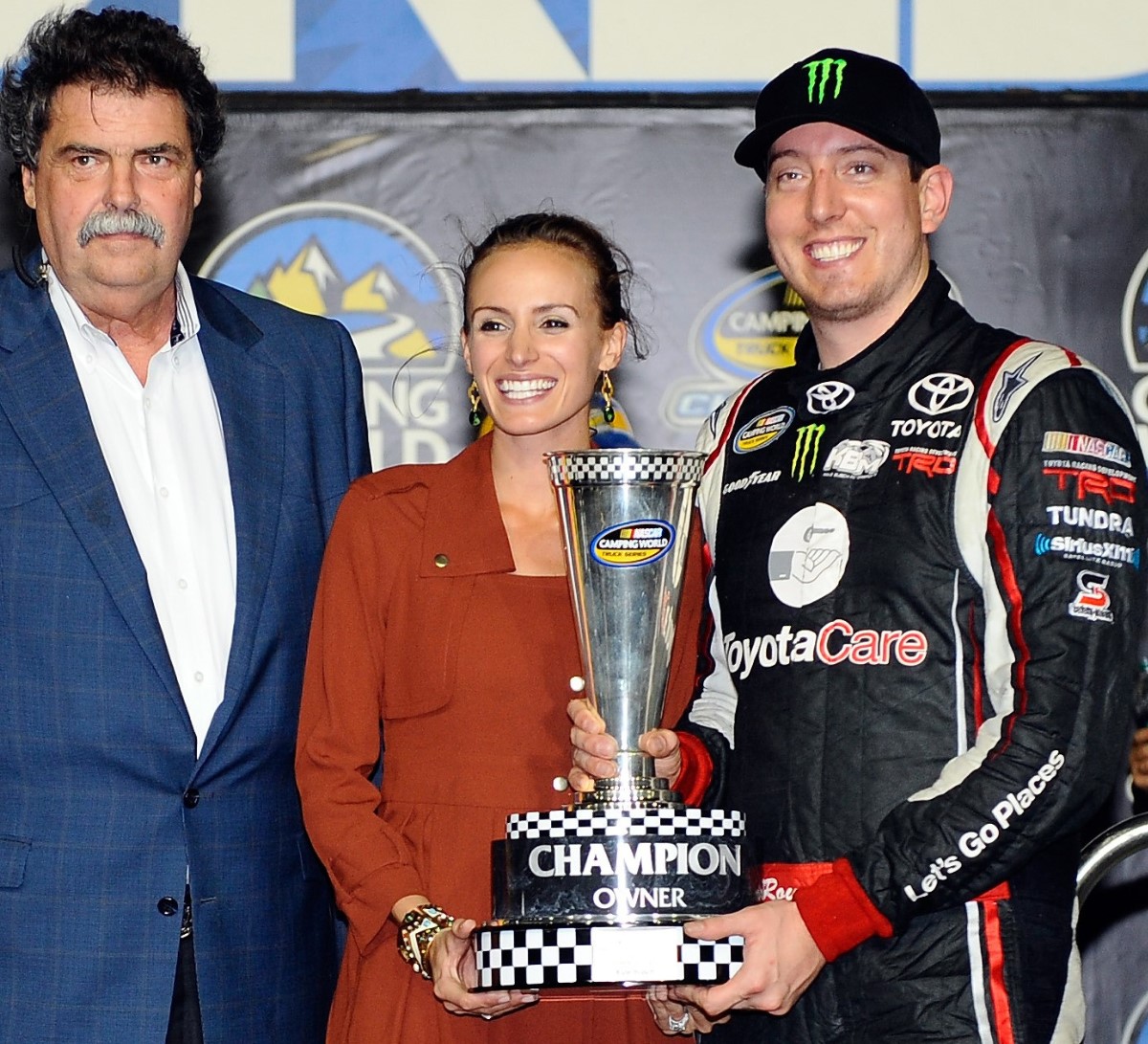 Busch held off Brendan Gaughan over the course of two green-white-checker restarts and then had to fend off rookie Ryan Blaney in the closing laps to collect his fifth truck series win of the season, edging out Blaney by a truck length at the finish line.

Busch’s victory was the sixth overall for the Kyle Busch Motorsports no. 51 team, who rallied back into the owners championship with a win last week by first-time winner Erik Jones at Phoenix, allowing the team to clinch their second owners championship, this time beating out ThorSport Racing in a tie-breaker based on number of wins.

"It means a lot, it means a lot to Kyle Busch Motorsports, it means a lot to my wife, but most importantly all our employees, everyone back at the shop, everyone back at home, everyone here with us tonight," said Busch of the winning the owners championship. “We worked hard all season long and everyone on this Kyle Busch Motorsports team deserves all the credit. They work so hard every week, all year long. The 51 team with Erik Jones winning last week — without that win last week we wouldn't have had a chance this weekend."

Despite coming up one spot short for the owners title, Crafton already had the driver’s title locked up – Having come into Friday night’s race with a 46 point lead over Ty Dillon and needing only to start the event to clinch his first career Truck Series title in his 13th season in the series.

“It's an honor to be able to drive this truck and to get these guys that are behind me that give me such great trucks," said Crafton. “We wanted to win the owner's championship and I thought we had that pretty good at hand just because we were running so good and to have the bad pit stop and got back there and got hung and just got wrecked.

“All in all, I'm a Camping World Truck Series champion and nobody can take that away."

Busch proved a force to be reckoned with in the last half of the race, leading 62 of the final 82 laps, with his only serious challenge coming from two-time truck series champion and current Nationwide Series points leader Austin Dillon, who traded the lead four times with Busch over the course of eight laps before Busch put him away for good on lap 117.

While Busch was dicing it up with Dillon, Jeb Burton steadily moved up and overtook Dillon for second before smacking the outside wall with four laps to go, bringing out the caution flag and wiping Busch’s two-second lead.

On the restart in the first overtime session, Busch got away clean from Gaughan but barely a lap in Joey Coulter and Crafton got together on the backstretch, damaging Crafton’s Chevrolet and forcing him to pit for repairs.

A second attempt at a green-white-checker finish ended after Crafton’s teammate Johnny Sauter got turned on the opening lap, lining up the field for one final try.

At the start of the final three-lap shootout, Busch again got a good jump on the start while Gaughan took a wicked shot in the bumper from Blaney, pushing Gaughan out of the groove and moving Blaney to second.

Despite pouring it on over the final two laps, Blaney was unable to get close enough to Busch to make a move for the win, but as a consolation prize took home the 2013 Sunoco Rookie of the Year award over fellow rookies Burton and Darrell Wallace, Jr.

“It's pretty cool to do this. You see people all the time when they win Rookie of the Year and we didn't really race against anybody, but it was so fun racing against Jeb and Darrell this year," said Blaney. “All the rookie guys this year were really good, really good drivers and in really good equipment. And when you combine the two, it has good results."