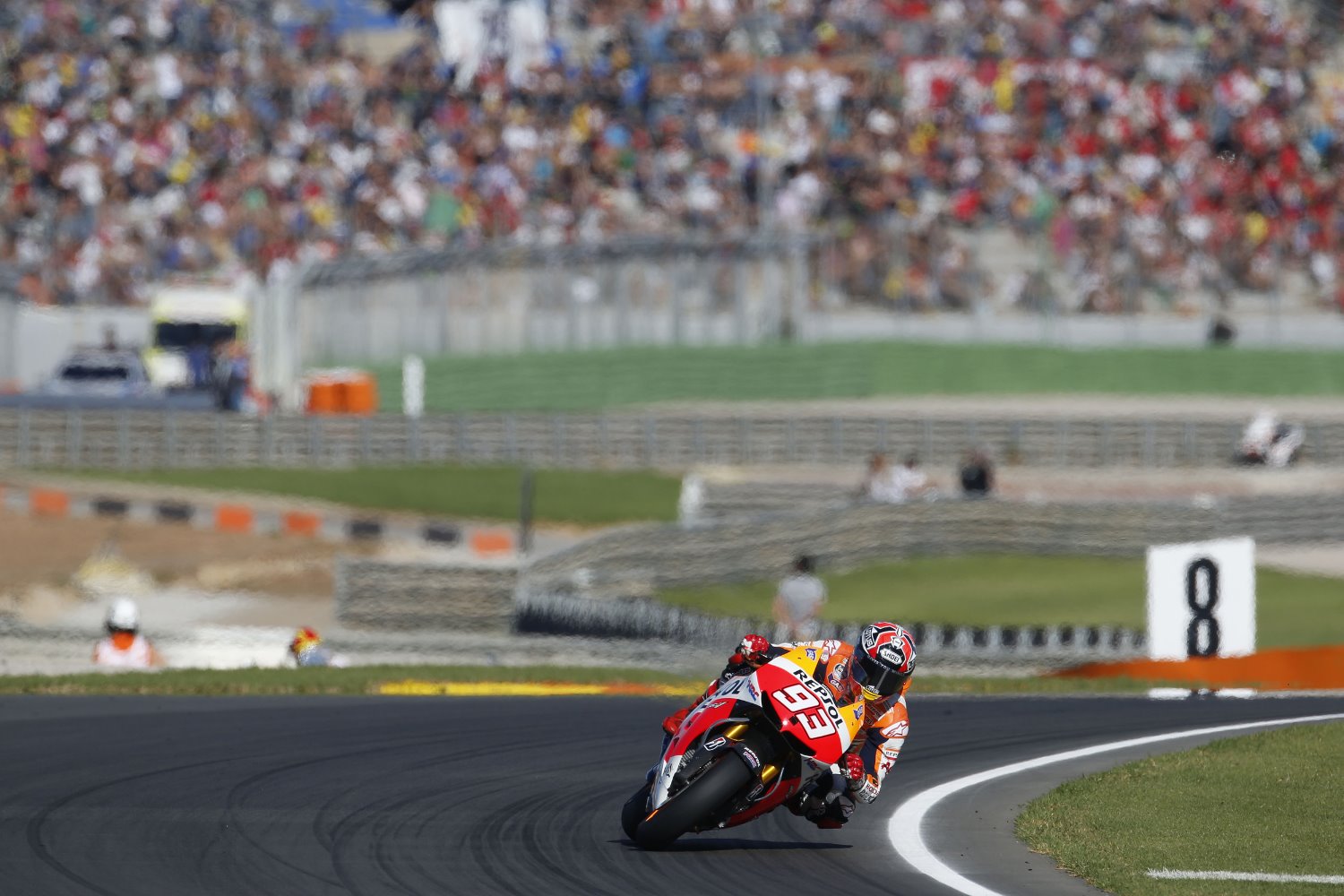 Yamaha Factory Racing’s Jorge Lorenzo wrapped up the 2013 MotoGP season today with victory in the Gran Premio Generali de la Comunitat Valenciana, his third consecutive victory of the season. Trailing leader Marc Marquez by 13 points going into the race, Lorenzo had nothing to lose and everything to gain as the Spanish showdown unfolded in front of a record crowd of 104,000 race fans at the Ricardo Tormo circuit.

Meanwhile, Repsol Honda rookie, Marc Marquez, has won the 2013 MotoGP World Championship by taking 3rd place in the final race of the season in Valencia. Teammate Dani Pedrosa took second to complete the team’s eleventh double podium of the season and claim Honda’s 62nd Constructor’s Championship in the premier class.

The race began with Lorenzo taking the lead and trying to bunch up the field. Dani pursued him and attempted several passes, but was unable to make them stick. At the beginning of lap 10, Dani and Lorenzo touched briefly and this allowed Marc to come through and take the lead with Dani dropping to 5th. Lorenzo would not give up so easy and on lap 11 he re-passed Marc. By lap 14 Dani was back up to 3rd and closing in on Marc. Dani recorded a new lap record on lap 22 with 1'31.628 and passed the young rookie on lap 26.

With just 4 laps remaining Marc, showed maturity and patience, knowing that his position was enough to claim the Championship. He passed the line in 3rd place and took his first MotoGP crown on his maiden year, becoming the youngest rookie at 20 years 266 days to win the Championship.

Jorge Lorenzo 1st 30 Laps
“I slowed the start of the race a little but I think it didn't work out because the other riders, Bautista, Valentino, Crutchlow and the others needed some tenths more to stay there. I tried first and last to play a little bit with the race and I managed it quite well but I couldn't stay there for too long. When I looked behind I could see that Valentino was very far away so I thought that today it was better to concentrate on winning the race and waiting to see if Marc makes a mistake. Now we have to celebrate second in the standings which is a good place. We have to congratulate Marc because he really deserved the championship and we will make a party tonight!"

Dani Pedrosa 2nd Championship Standing: 3rd – 300 points
"The race was difficult at the start because of the overtaking moves between myself and Jorge. However, we fought to the limit until I was taken a little off the track and lost ground as a result. Above all, I want to congratulate Marc today. He has done an excellent job this season and had a great campaign. We should take our hats off to him because he has achieved something historic; to win the MotoGP title as a rookie is incredible"

Marc Marquez 3rd Championship Standing: 1st – 334 points
“It was a really long race, maybe the longest of my career! At the start I was very nervous, I know I said I wasn’t but if I’m honest I really was. Jorge had a very good start, as usual, and I wasn’t sure which tactic to take. I followed Jorge and Dani and began to settle into the race. Then towards the end, I decided not to push as I knew my position was secure and safe to take the Championship. It has been a fantastic year, I am still in a dream! I really didn’t expect this at the beginning and I am really so very happy. So thank you to all my team, my family and of course Honda and all our sponsors. The support from everyone and all my fans around the World has been incredible and I dedicate this Championship to you all!"