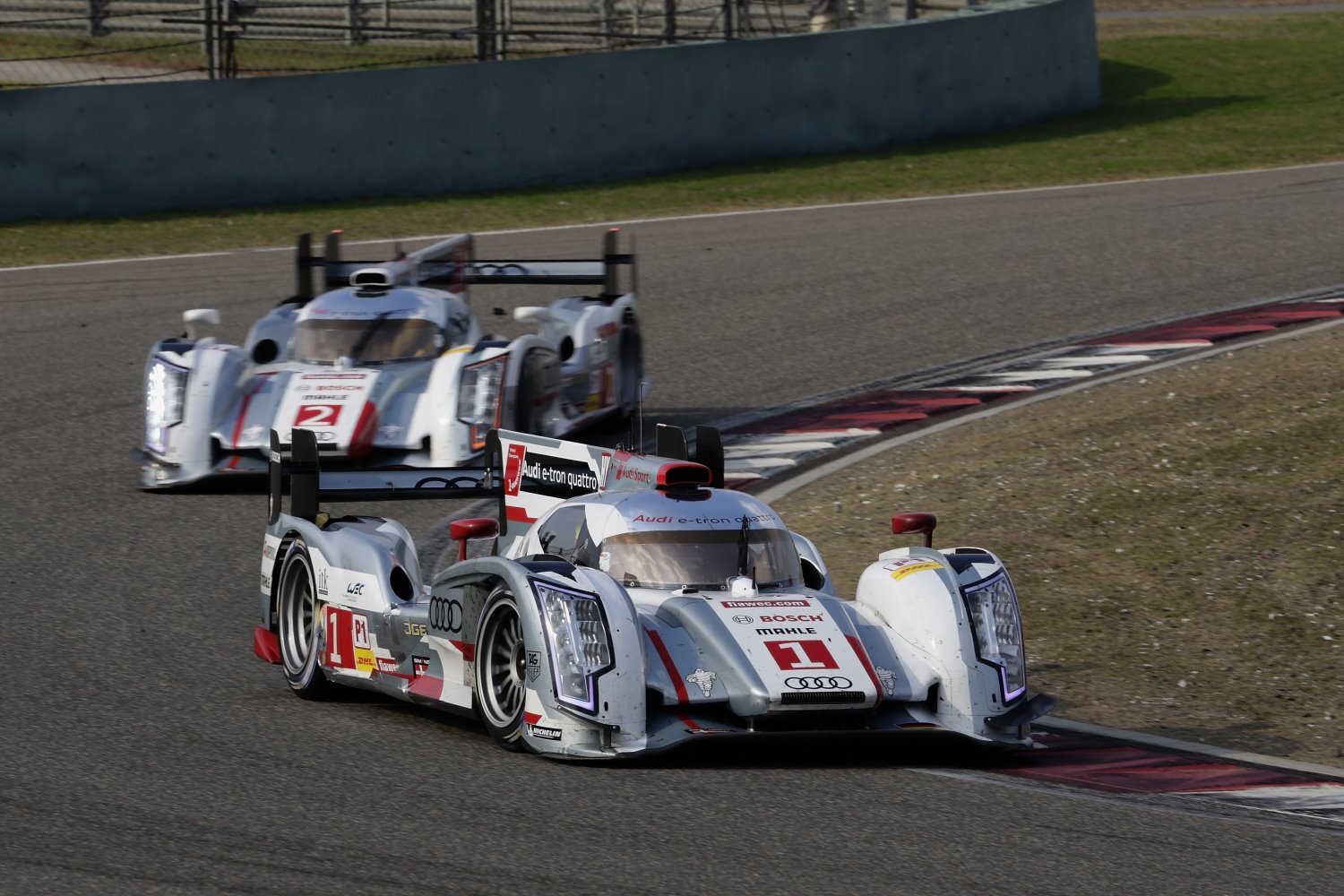 Toyota Racing suffered a disappointment in the Six Hours of Shanghai, leaving China with a second place when a better result was within touching distance. Fassler, Lotterer, Treluyer won for Audi.

Alex Wurz and Nicolas Lapierre, in the #7 TS030 hybrid, started from pole position and were firmly in the fight for victory when they lost valuable time due to a puncture in the final two hours. They recovered to finish second.

The #8 car of Anthony Davidson, Sebastien Buemi and Stephane Sarrazin looked on course for victory. With 90 minutes remaining the #8 held a comfortable lead but a damaged suspension forced it into retirement.

Nicolas started in pole position in the #7 and held the advantage into turn one as Anthony, at the wheel of the #8, put heavy pressure on the second-placed Audi.

After 18 minutes of dueling, Anthony took second and closed on the #7 as the pair of TS030 HYBRIDs fought through lapped traffic.

Anthony pitted first and used new tires to good effect; when Nicolas made his stop a lap later, the #7 resumed in second, just behind its sister car.

The order stayed like that as Alex took the wheel of the #7 while first Stephane then Sebastien had their stints in the #8.

In the final third of the race, the #7 suffered an unlucky break when a rear left puncture forced Nicolas into an extra stop just three laps after a scheduled fuel and tire change. That cost valuable seconds which proved decisive in the end.

Just a few minutes later there was more disappointment for the team; the #8, with Anthony at the wheel, suffered a suspension issue which forced it into retirement.

The #7 was still in the fight for victory and made its final stop, for fuel only, with 35 minutes to go. Alex emerged in the lead but without the optimum tires due to the unscheduled change after the puncture, the #7 dropped to second.

On clinching a title and the sixth victory of the season at the seventh of eight rounds of the FIA World Endurance Championship (WEC), Audi had two reasons to celebrate. After the success in the Manufacturers’ World Championship had been determined in Japan three weeks earlier, Loic Duval/Tom Kristensen/Allan McNish (F/DK/GB) in the Audi R18 e-tron quattro won the drivers’ classification* in China. At Shanghai, the trio only had to take third place. Their team-mates Marcel Fassler/Andre Lotterer/Benoit Treluyer (CH/D/F) won the race following a strong performance.

Now all six Audi factory drivers, who are contesting the entire WEC, have won a World Championship: Loic Duval/Tom Kristensen/Allan McNish follow Marcel Fassler/Andre Lotterer/Benoit Treluyer, who were the first to decide the new FIA World Endurance Championship (WEC) in their favor last year. Three victories – at Silverstone, the Le Mans 24 Hours and Austin – plus three second places at Spa, SÃ£o Paulo and Fuji, and third place at Shanghai, provided the foundation for the Championship success.

In the current season, Audi has celebrated 14 podium finishes, including six victories in the WEC. The drivers’ title was decided in the most important single market of AUDI AG in China on a circuit that actually does not suit the Audi R18 e-tron quattro well. Despite this factor and a puncture that required an additional pit stop Marcel Fassler/Andre Lotterer/Benoit Treluyer secured the first sports car victory for Audi in China. Treluyer, following a strong final sprint, crossed the finish line with an advantage of 15.374 seconds. Loic Duval/Tom Kristensen/Allan McNish in the battle for the title avoided any unnecessary risk and concentrated on driving a flawless race throughout. Audi is now traveling to the WEC finale at Bahrain, where in three weeks from now the brand aims to take its seventh WEC victory of the season.

* Subject to the official publication of the results by the FIA

Quotes after the race

Dr. Wolfgang Ullrich (Head of Audi Motorsport): “That was a brilliant victory because it was a really hard-fought one. The race was thrilling all the way to the end and decided only in the last half hour. The team performance was particularly nice because car number ‘2’ helped out car number ‘1’ with tire sets. Consequently, we delivered a great result for the Audi brand and showed how harmoniously our team functions. In the winning team, Benoit Treluyer had a very important part. The track suits him particularly well."

Chris Reinke (Head of LMP): “A tremendous result. We knew before that the track doesn’t suit us so well. It was the biggest challenge in the World Championship. At the beginning of the race, it was obvious how difficult the situation was for us. But in the end, we showed a strong forward battle. That’s how we won the race and the drivers of number ‘2’ took the World Champion’s title."

Ralf Juttner (Technical Director Audi Sport Team Joest): “The race started very hard but ultimately ended in a brilliant result for us. During the course of the race the situation between our competitor and us completely changed. Even at the midpoint of the race we didn’t believe that we were going to take victory. We won and the new driver World Champions were on the podium too. ‘Well done’ to the whole squad."

Marcel Fassler (Audi R18 e-tron quattro #1): “Today was Ben Treluyer’s day. He was incredibly good today and throughout the weekend. Our team did a brilliant job as well and carried out a perfect strategy. This is a great day for Audi. The Drivers’ World Championship has been decided as well. Congratulations to our team-mates in number ‘2.’ And we can be very pleased today too."

Andre Lotterer (Audi R18 e-tron quattro #1): “A fantastic day for Audi with our victory. We had Super-Ben in our car today. Originally, he only wanted to drive two stints. But because he was extremely fast he wound up driving four. In the beginning, we lost a bit of ground and had to change a flat tire. But we managed to turn the situation around with a better strategy and better tires. We subsequently caught up with Toyota, who had a puncture too. This made the race extremely thrilling. And our team-mates have won the World Championship title. A great day!"

Benoit Treluyer (Audi R18 e-tron quattro #1): “Congratulations to our team-mates on winning the World Championship title. Tom and Allan have been top-caliber drivers for such a long time; they simply deserve it – just like Loic, who’s experienced a great season. Our Audi was outstanding. After we didn’t have the right tires at the beginning of the race, we became notably faster on a different type of tire. Car number ‘2’ helped us out with these tire sets. Thank you very much for that! This way, I was able to overtake Alex Wurz in traffic. It was a thrill all the way to the end."

Loic Duval (Audi R18 e-tron quattro #2): “I’ve only driven a full season for Audi alongside Tom and Allan this year. This was combined with a certain pressure as well as a nice hope. After all, I’m driving in the best team of the world. We’ve always given our best and have won the World Champion’s title for it today. That’s an overwhelming feeling in this outstanding year in which we’ve also won Le Mans together. More than this isn’t possible."

Allan McNish (Audi R18 e-tron quattro #2): “I’ve been waiting for this moment since 1985. Even in karting, I battled for the World Champion’s title – back then at Le Mans by the way. In Formula 1, I didn’t have a real chance. Now, in my third motorsport discipline, it’s worked out. I’m proud of what we’ve achieved together this year. Things were going really well. For me, the race at Austin was a very important element on the way to today’s success. Now I’ve got a feeling of special warmth in my body and of special wetness on my back, after Alex Wurz drenched me in champagne …"

Anthony Davidson: “It has been a heartbreaking day for us. It’s rare that you have a race in the bag from so early on but we had it completely under control after the puncture of car #7. I was just conserving the car then braking into turn six, something broke on the suspension. I made it back to the pits but unfortunately it was irreparable. It is massively disappointing. We would have won this race fair and square. Sometimes motorsport bites you hard and it obviously wasn’t meant to be today."

Sebastien Buemi: “We showed great performance this weekend. We were leading the race for most of the time until the problem. Our performance really showed we have made a lot of progress since we introduced the high-downforce package. We would have won the race if we had no problems. I am very disappointed but these things can happen. I want to thank the team for their hard work; bringing two cars here was a big effort. Hopefully the team can finish the year on a high in Bahrain."

Stephane Sarrazin: “It was an amazing weekend until the last 90 minutes of the race. The team started very well with the qualifying and we showed amazing pace. We have improved a lot since the beginning of the year compared to Audi. To be leading the race like that was really good. It is a pity we had this problem but the team did a great job this weekend. The car was amazingly good, my team-mates did a great job. It is a pity we finished like that because everyone in the team deserved the win."

Yoshiaki Kinoshita, Team President: “We have waited a long time but today was the day we could show the true performance of our high-downforce package in race conditions. The timing of the puncture was very unlucky. If you have it at the beginning of the race you have more chance to adjust the strategy. But when it happens in the last two stints there’s not a lot you can do to minimize the damage. The suspension problem was maybe due to contact with another car at the beginning; we are investigating exactly why this happened. Finally, I’d like to offer our congratulations to Tom (Kristensen), Allan (McNish) and Loic (Duval) on becoming world champions; they have been fast and fair opponents all season."