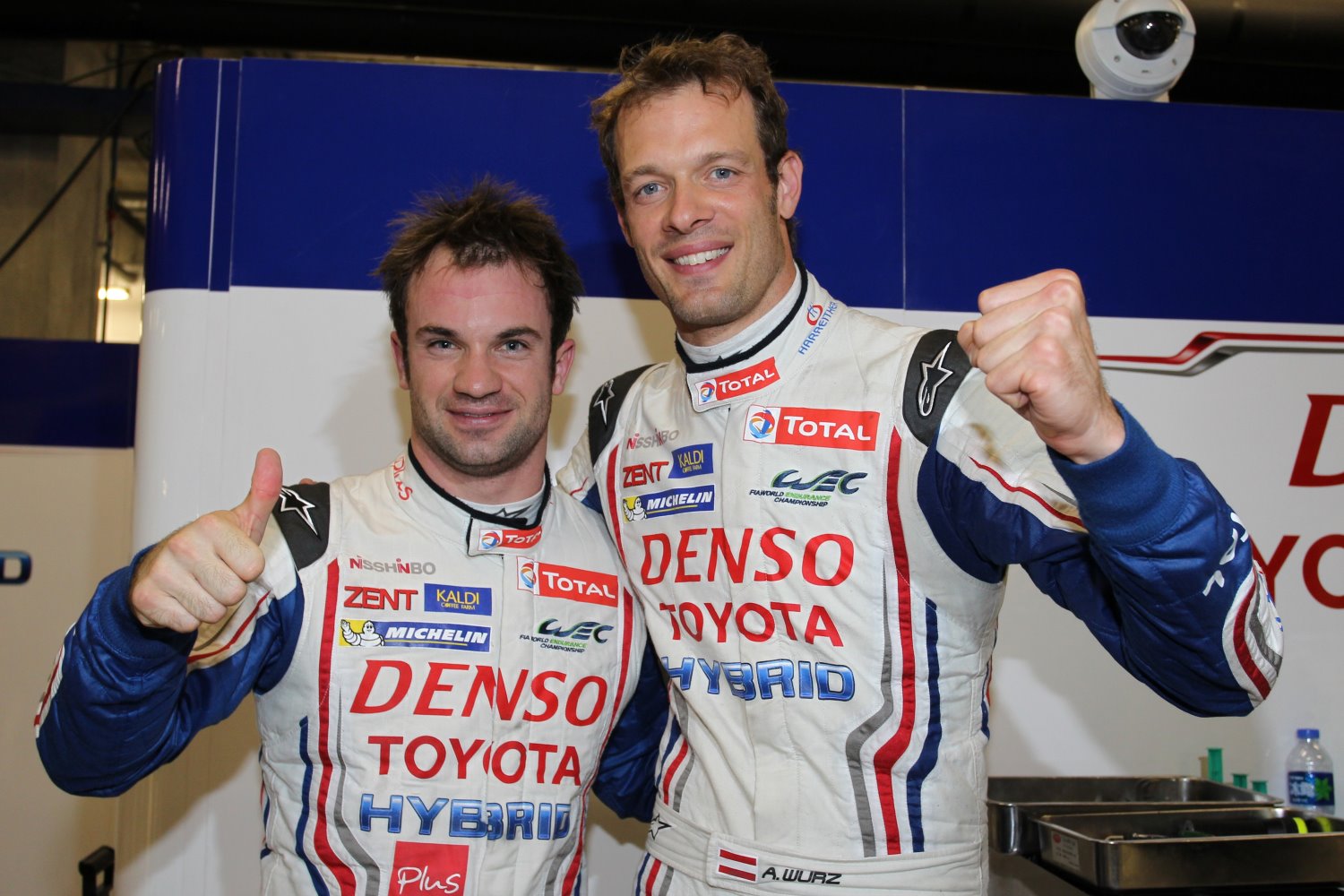 Toyota Racing will start the Six Hours of Shanghai from pole position after an impressive performance in qualifying for the penultimate round of the FIA World Endurance Championship. In a qualifying session that was thrilling up to the last seconds, a ‘string’ broke for Audi in China.

The #7 of Alex Wurz and Nicolas Lapierre, winners last year in Shanghai, came out on top in qualifying by 0.089secs to earn top spot on the grid for tomorrow’s race over Audi.

Qualifying this year requires two drivers from each car to set a minimum of two flying laps each. The grid is decided by the combined average of each driver’s fastest two laps.

This week’s event is compressed into two days, meaning today featured a hectic program with a pair of two-hour practice sessions preceding qualifying.

The Audi R18 e-tron quattro had been unbeaten in qualifying since May. Now the score in the battle with challenger Toyota is 5-2 for Audi.

Car number ‘1’ was clearly the faster one of the two Audi hybrid sports cars in qualifying at Shanghai. Marcel Fassler was the first driver to go out. On the average of his two fastest laps, he achieved the second-best time, trailing Toyota driver Alexander Wurz by a gap of 0.432 seconds. On his fastest lap, he even beat last year’s qualifying lap record by 261 thousandths. When Benoit Treluyer followed Fassler, the Frenchman reduced the gap to the front runner on the average of his first two laps to 0.217 seconds. As Treluyer was forced to run behind in traffic on his first outing, he pitted to refuel and to start another trial on the used tires, subsequently managing to set his personal best lap time of 1m 48.091s. Last year’s World Champion thereby reduced his gap to the number ‘7’ Toyota to 0.089 seconds and just barely missed grid position one together with his team-mates. With that, a string of five consecutive best times in WEC qualifying sessions came to an end for Audi.

In opening practice Nicolas set the fastest time for the #7 to take fourth while Sebastien clocked the quickest lap in the sister car on its way to second.

Final practice suffered two red flag interruptions and was extended by 20 minutes as a result.

When the checkered flag fell, the #7 and #8 were in third and second thanks to laps from Alex and Stephane respectively, but a penalty saw the #1 Audi’s time disallowed, promoting the TS030 HYBRIDs to the top of the timing sheets.

Following a strong practice performance, the #8 of Anthony Davidson, Sebastien Buemi and Stephane Sarrazin were also in the hunt for pole. Sebastien and Stephane were the two nominated qualifiers and took third place.

In the number ‘2’ Audi R18 e-tron quattro, Allan McNish and Tom Kristensen on the average of the four fastest times achieved 1m 49.173s. Therefore, the leaders of the standings will be starting from the second row alongside the number ‘8’ Toyota. The grid positions, though, tend to be of secondary importance in the 6-hour race in the Chinese metropolis. The crucial aspects on the rough tarmac and in the tight combinations of turns are to tactically manage the race well and to treat the tires gently, as temperatures of clearly above 20 degrees centigrade are expected on Saturday.

Alex Wurz: “That’s my second pole here in WEC at Shanghai so it’s good to keep up my 100% record. Today went well and I am very happy with the three laps that I did. I’m happy with my day, I made no real mistakes in qualifying and now we look towards the race. There’s not a lot more to say."

Nicolas Lapierre: “It’s good for the team. We have seen today that the car was also good on the long runs so it could be good as well tomorrow. I have to say congratulations to Alex because he made the lap times at the beginning of qualifying. He did a great job. It could be a strategic race, particularly in terms of tire management. The car is looking good. Normally we are more competitive in the race than in qualifying which bodes well."

Marcel Fassler (Audi R18 e-tron quattro #1): “We almost took the pole position, there was really just a tiny bit lacking. Ben (Treluyer) drove brilliantly, the whole team did a superb job of preparing the car. I may have been a bit too ambitious on my fast laps but, still, we’ve got a good starting base for the race."

Andre Lotterer (Audi R18 e-tron quattro #1): “That was a nice qualifying session in which we battled all the way to the end. Ben (Treluyer) did a great job even though it wasn’t quite enough in the end. On his second fast lap, he hit a bit of traffic. It was close but we’re looking to the race with optimism."

Benoit Treluyer (Audi R18 e-tron quattro #1): “It was a close qualifying session and a nice battle with Toyota. We worked out a good set-up today, which helped us a lot. I hit traffic twice on my fast laps but that’s part of the game. We’ve got a good car for the race tomorrow."

Anthony Davidson: “In both practice sessions prior to qualifying we had a decent balance on our car but the grip level was heavily affected due to the increased track temperatures in the second session. We had to chase the grip a bit and that made things a bit challenging. Regardless of what happened in qualifying, we feel the car is in good shape for the race which is the main thing."

Sebastien Buemi: “In the end it is a good day for the team because the #7 got pole position. We are a bit frustrated because we are in third place, so we will try to understand what happened. But we are still happy with the overall performance of the team and we’ll try to turn that into a good result tomorrow."

Stephane Sarrazin: “It was difficult in qualifying. I didn’t do a great lap on my first flying lap. I had a big lock up and had some understeer so I could not push as hard as I wanted. Congratulations to #7 for pole position; that’s very good for the team. Now we have to push throughout the six hours to get a strong result."

Loic Duval (Audi R18 e-tron quattro #2): “I was struggling a bit this afternoon but, still, it was fun watching the guys battle for the pole position. Our fourth place on the grid is perfectly okay for such a long race. Naturally, we’d prefer being further in front but things like dense traffic are part and parcel of a WEC qualifying session. Congratulations to Toyota, but also to our sister car."

Tom Kristensen (Audi R18 e-tron quattro #2): “I’m not happy with qualifying. I always had a lot of traffic on my three laps. But now we’re looking to tomorrow. In the practice sessions we worked out a few things that should be helping us in the race. That’s what we mainly concentrated on."

Allan McNish (Audi R18 e-tron quattro #2): “That was a pretty difficult qualifying session. Our second free practice wasn’t optimal, so we weren’t perfectly prepared for qualifying. In terms of lap times, the car is very fast. But our biggest issue is treating the tires well across the distance."