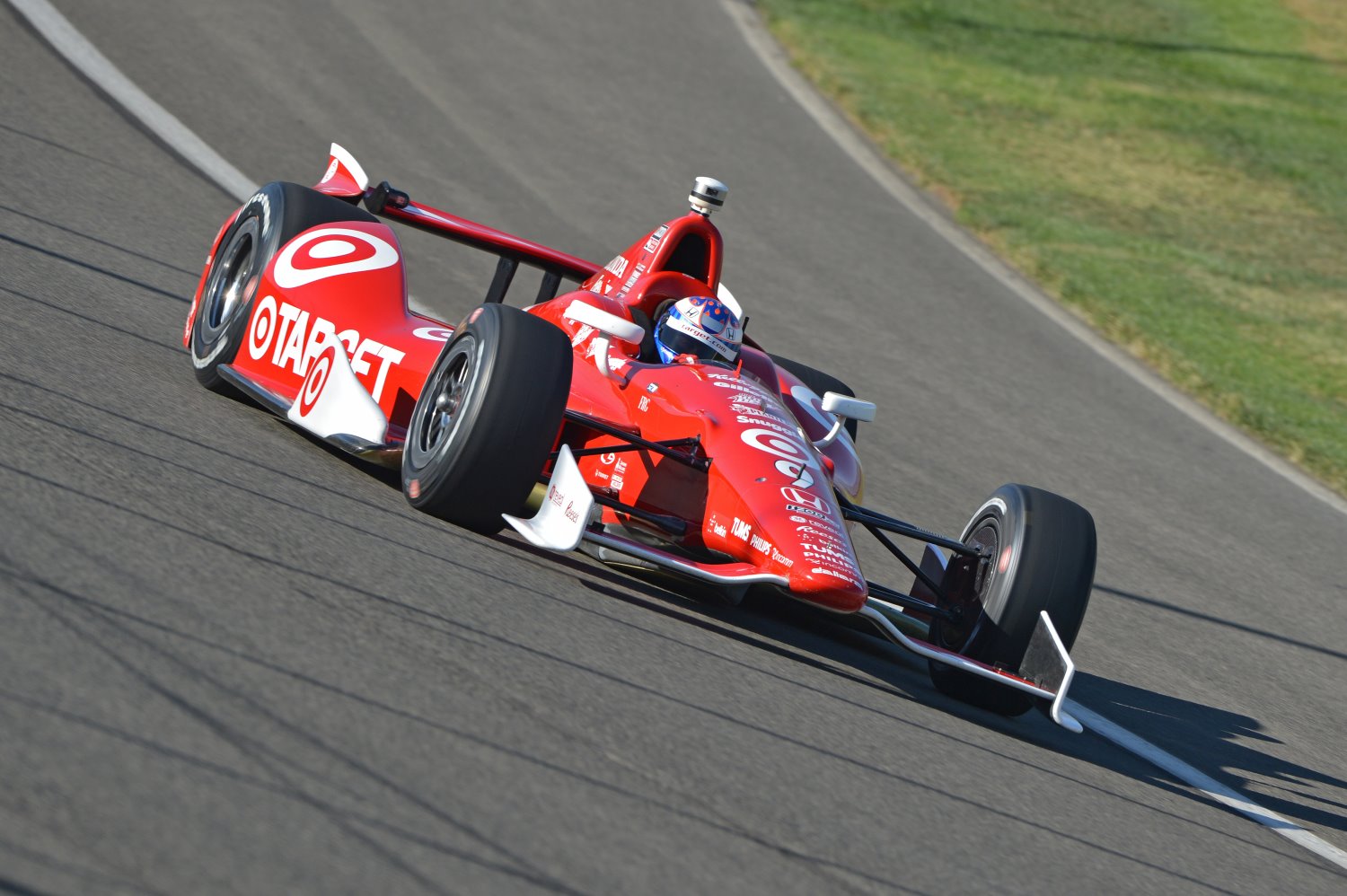 We’ll get to the IndyCar finale at Fontana shortly.

To begin, however, we received a fair amount of response to last week’s article on Dario Franchitti’s at Houston, some of which was positive, some of which took exception. One executive with an internationally renowned track design company, who asked to remain anonymous, wrote the following:

I would like to compliment you on your review of the catch fencing situation in Houston. It is by far the most objective commentary that I have seen."

I would like to publicly thank this individual not only for his or her kind words, but for taking the time to share their expertise, by passing along detailed information regarding the procedure for erecting world-class race facilities.

As you might imagine, not every respondent sang the praises of AutoRacing1.com. And while we welcome differences of opinion, allow me to be very clear on the following.

Any suggestion that AutoRacing1.com would advantageously incorporate Franchitti’s accident, which featured deadly objects flying in the direction of spectators at high speeds, as part of some larger, ongoing agenda to discredit IndyCar, is moronic. The agenda of AutoRacing1.com is to provide our readers with informed commentary of the happenings within a sport we love.

Now, if the result of that commentary so happens to reveal a less-than-favorable portrayal of IndyCar, well then, so be it. I will simply offer the thesis that IndyCar has repeatedly displayed an uncanny ability to paint a less than favorable picture of themselves, often in the absence of any assistance from AR1.

I’d also like to point out that the most comprehensive discussion of what happened on the final lap at Houston two-and-a-half weeks ago appeared in this very space. Whereas one longtime IndyCar journalist, who professes to be an “expert," responded to fence poles flying at spectators by saying “the fence did its job," AR1 either directly or indirectly brought attention to the following pertinent questions:

Or is the process "rubber-stamping" in nature? Is the process deliberately vague to diffuse blame? And if there is no firm standard with regard to fencing, is it reasonable to presume there are not firm standards with regards to other components of the track? Did the fact that the Houston track was only erected late Thursday evening allow for proper oversight?

Now, I will say that a reasonable discussion can be had regarding what degree IndyCar was accountable for what happened at Houston relative to the promoter, and other involved parties. AutoRacing1.com is willing to have that conversation.

However, when there are deadly objects flying at spectators, the questions raised by AR1 last week were more than fair. In fact, it arguably would have been immoral to have not asked them.

And as we have come to expect with the Dallara DW 12 chassis, the racing at Fontana was stupendous. The question for IndyCar going forward with ACS centers around the crowd.

Now, all indications are the fine people at ACS are working to build the event as the regular season finale. But if IndyCar is going to hold it's season finale, 30,000 people at a venue with a capacity of 85,000 is not going to suffice. IndyCar needs to make its events look "big-time," on television and swaths of empty seats don't make the event look major.

Again, I am willing to give this time, particularly with an eager promoter, racy track, and the possibility of the season ending ceremony in Southern California. But if Fontana is going to be the permanent host of the IndyCar finale, a stronger paid attendance is an absolute must, going forward.

Speaking of the Season Ending Ceremony:

I don't live in Indianapolis.

But it didn't take a rocket-scientist to figure out Sunday evening was going to be, by any measure, the biggest regular-season game in the history of the Indianapolis Colts, with Denver Broncos quarterback and Colts legend Peyton Manning playing his first game at Lucas Oil Stadium as a Bronco.

What does IndyCar do? Schedule their awards ceremony to begin at about kickoff time of the Broncos-Colts game.

I suppose there could be a good reason for this. However, the NFL schedule is released every April. To my knowledge, IndyCar booked its banquet facility about a month ago. And I must ask: how can IndyCar tell a sponsor they are serious about maximizing value for that company's brand when the season-ending ceremony was scheduled parallel to the biggest regular-season sporting event in Indianapolis history?

Please, someone tell me: how if you are IndyCar do you respond to such a question?

I don't mean to short change the incredible season 2013 Izod IndyCar Series Champion Scott Dixon had. While I was highly critical of his comments asking for Race Director Beaux Barfield to be fired after Baltimore, the Kiwi was easily the best driver in the series from Pocono forward this year.

Also, my thoughts regarding Dixon and his place in IndyCar history have been detailed previously.

Not to Be Persnickety But….

I was very happy to see James Hinchcliffe return to Andretti Autosport next season with a fully sponsored effort courtesy of United Fiber and Data, a York, PA based company specializing in fiber networking and broadband solutions.

While it’s good to see any new sponsor come into the sport, the UFD announcement represents the continuation of a trend that has probably been ongoing for about a decade and a half: the ever-widening chasm between IndyCar and consumer brand companies.

Simply put, if the sport is going to reach a broader audience, it needs to be relevant to companies that produce brand products a broad audience uses. Thus, finding a way to lure consumer brands back to the sport is vital.

Of course, consumer brand companies will return to the sport in greater numbers if and when the television value improves to a level that makes their participation appealing.

Now, as a general practice, I tend to be philosophically opposed to the idea of purchasing television time, something AR1 President Mark Cipolloni suggests in this article. Simply put, purchasing time on TV takes what should be a cash-producing asset (TV rights) and turns them into an expense that requires selling ad time to offset that expense. In addition, IndyCar does get paid by ABC for the five races it currently broadcasts, so we'll not talking about buying TV time for all the races.

That said, the numbers Mark cites are incredibly compelling. And the fact IMS and IndyCar continue to bank the measly checks they receive from NBCSN while sponsors such as Go Daddy, HP and Izod head for the hills, makes you wonder whether Hulman and Co., is serious about growing IndyCar going forward. Or are they……

I continue to be flabbergasted by members of the IndyCar media, who persist in articulating the fallacy that NASCAR’s arrival at NBC Sports in 2015 will help IndyCar. One IndyCar media member noted that IndyCar “awaits," NASCAR’s moving to NBCSN in 2015.

Yes, I can barely contain myself.

While I make this point in more detail here, let the record show there is no historical evidence of any kind supporting this preposterous notion. None! Contrarily, there exists a preponderance of evidence suggesting NASCAR will use its prominence at NBCSN to further marginalize IndyCar.

Sure, I suppose some unforeseen scenario may occur, where there is integration and promotion between the two. I also imagine there may be an opportunity here and there to use a NASCAR race as a lead-in to promote an IndyCar race here and there.

But I know this for certain: The next time NASCAR and IndyCar collaborate in way that commercially benefits each party will be the first. I also know NASCAR did not go to NBCSN for the purposes of IndyCar. And if you remember NASCAR Chairman and CEO Brian France made it very clear this summer: NASCAR has zero interest in any collaboration with IndyCar. In fact you can bet NASCAR would like nothing better than to kill off IndyCar and take whatever sponsors, teams and events are left behind, including making the Indy 500 a stock car event.

–Rahal Letterman Lanigan had something of a forgettable season in 2013. If they are to take a step forward in 2014, a good place to start would be the ovals. Other than Graham Rahal’s fifth place finish at Iowa, RLL scored no finish better than twelfth in the oval races between James Jakes and Rahal.

–If NAPA is so morally opposed to the actions of Michael Waltrip Racing earlier this season at Richmond, why are their logos still on Martin Truex’s car?