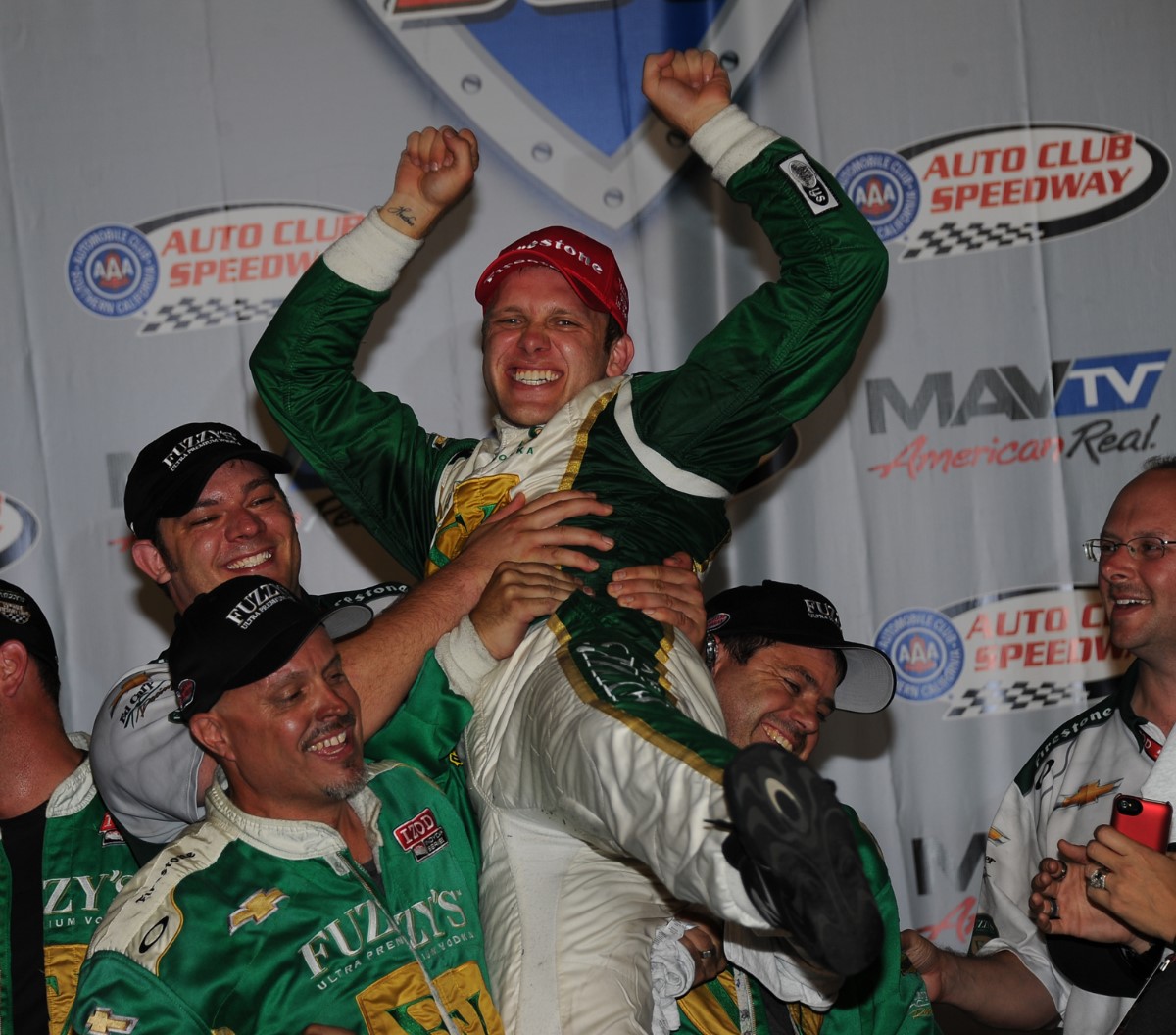 The IZOD Indy Car Series, for the second consecutive year, will be wrapping up their racing season at the very beautiful, but very challenging, Auto Club Speedway in Fontana-California this Saturday night, October 19th. 25 cars will take the green flag to start the MAV TV-American Real 500. Only one of those cars will be parked in victory lane after successfully running 250 laps around the Auto Club Speedway's two mile, D shaped, oval.

Looking at the race line up, along with the highly competitive nature of the series' 2013 season, it's realistic to say that approximately half of the starting field has the horsepower and the driving talent to win the MAV TV-American Real 500. However, only two drivers has a stake in winning the season championship and that will be the major focus during Saturday night's race.

This will be the eighth, consecutive, year that the IZOD Indy Car Series' championship will be decided during the final event of the season.

Scott Dixon, driver of the Target Chip Ganassi Racing Honda, will be seeking this third series title Saturday night. The New Zealand driver took command of the series' points lead for the first time back on October 6th following the street course event in Houston-Texas. He currently has a 25 point advantage over second place driver Helio Castroneves and can wrap up his third title with a fifth place finish or better during the MAV TV-American Real 500.

However, an advantage of 25 points going into the final race isn't exactly an insurmountable figure. IZOD Indy Car Racing Series history has proven that in the past. Since 2009, the driver who entered the final race with the points lead has failed to win the championship. The last, final race, points leader to win the title was Scott Dixon back in 2008.

In some comments from the series' official website, Dixon said he felt the 2013 championship could come down to a last lap, final corner, scenario. Regarding any consideration regarding points racing Saturday night, Dixon said it would "business as usual, go for the win."

Helio Castroneves, the driver of the Auto Club-Team Penske Chevrolet, will be starting the MAV TV-American Real 500 filled with confidence. He really liked his race car during a September 24th series' test held at the Auto Club Speedway and truly believes he has a better than great chance of winning the race. Regarding the pressure of being second in the points, the Brazil driver said "at this point I feel that I have nothing to lose so there's no pressure to be honest. You just go for it."

Also very much involved in the series' championship finale is the post season bonus money. The new champion is going to receive a cool one million dollars for his season long effort. The runner up in the final standings receives $250,000 while third through fifth receives $175,000, $125,000 and $75,000 respectively.

Also up for grabs is the bonus money from the Fuzzy's (Premium Vodka), Triple Crown. This contest originally offered a one million dollar bonus to any driver who could win the Triple Crown events at the Indianapolis Motor Speedway, the Pocono International Raceway and the Auto Club Speedway. There was also a back up plan that offered a driver a bonus of $250,000 for winning two of the three designated races. That second bonus plan from Fuzzy’s is up for grabs Saturday night. Tony Kanaan, Indianapolis 500 winner, and Scott Dixon, Pocono winner, are the two eligible drivers who could collect $250,000.

Also to be resolved Saturday night is the series' Manufacturer's Championship. Chevrolet and Honda are tied in the owner's standings heading into the final race.

There's also a good possibility that we're going to see a drivers and owners championship split between two different teams. In the competition for the series' Entrant Championship, Chip Ganassi leads Roger Penske by 40 points. That's largely due to the 15 points Penske was penalized for following a post race inspection at the Texas race.

Kicking off the action Saturday will be the final race for the Firestone Indy Lights Series who will be running the Lefty's Kid Club 100. Schmidt Peterson Racing, presented by Curb-Agajanian , will win the Entrant Championship and will celebrate a championship with one of their drivers after the race. The big question is: which driver will it be? 18 year old Sage Karam leads team mate Gabby Shaves by 16 points in a title run that could easily go either way.

The real winners, from Saturday night's MAV TV-American Real 500, will be the fans who are going to be treated to some terrific high horsepower racing around the Auto Club Speedway's mammoth oval. There will be times when the cars will be racing in a five wide formation through the speedway's sweeping turns while hitting speeds of 215 MPH down the long straightaways.

All of this racing action is backed by a speedway staff who is famous for thinking and working outside of the box to insure that their special guests, the fans, are having a great time. The Auto Club Speedway is currently offering a variety of ticket options that range from budget friendly general admission seating to highly elaborate VIP packages guaranteed to please any fan. Dial up their official website, www.autoclubspeedway.com, or call 1 800 944 RACE.

Owned and operated by Lucas Oil Products, MAVTV is a television network with its roots deep in the automotive world. With an unparalleled line-up of motorsports events and exclusive automotive reality shows, MAVTV is the answer for motor-heads from all walks of life. But MAVTV is much more than a motorsports destination, with original action/adventure programming, live MMA and an unbelievable library of blockbuster movies, MAVTV is a network the whole family can enjoy. A network by the people and for the people, made in America and American Real.