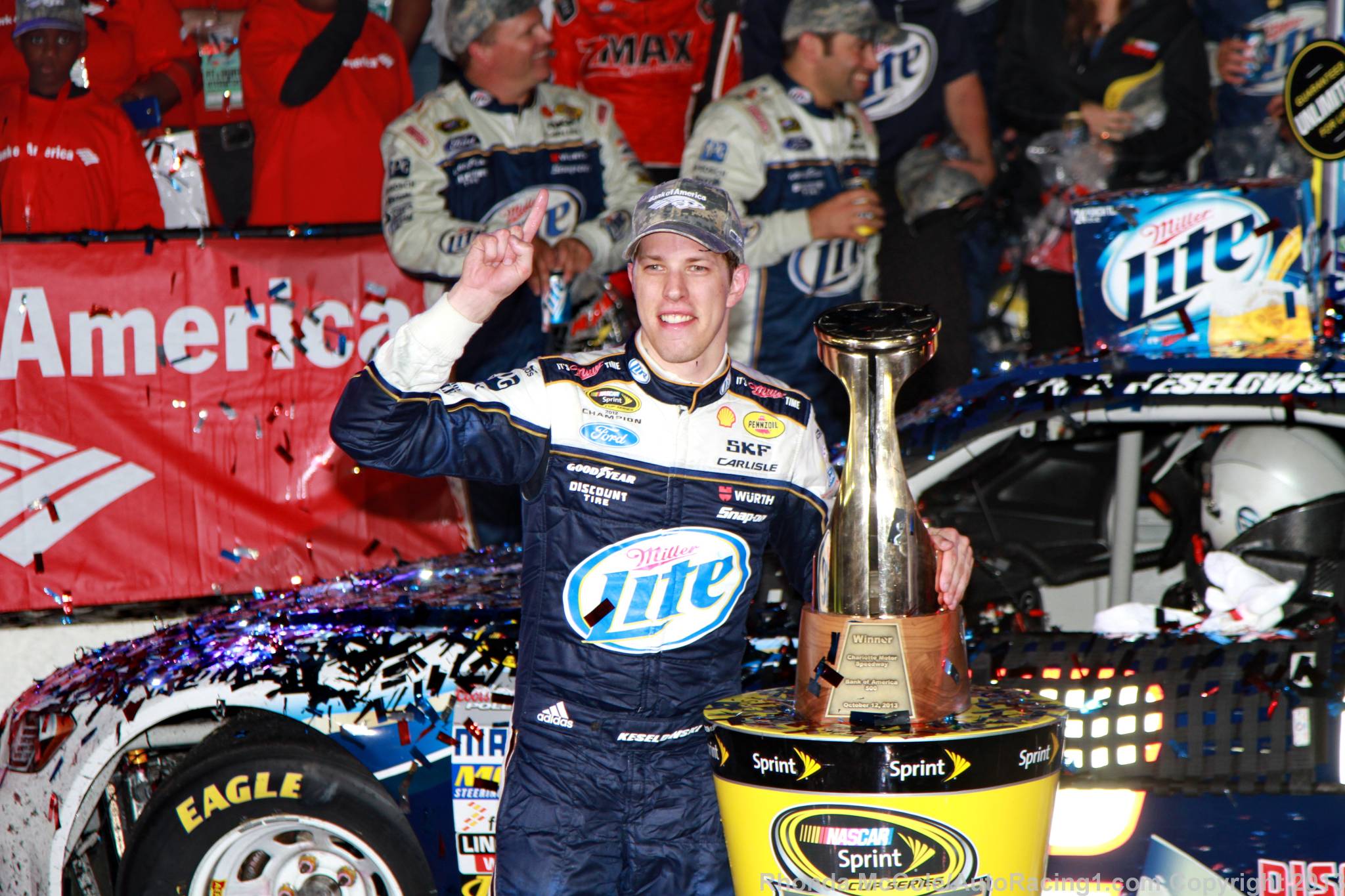 Defending Sprint Cup Champion Brad Keselowski finally had some good luck roll his way Saturday night after breaking through with his first victory of the year in the Bank of America 500 at Charlotte Motor Speedway, ending a 37-race winless drought in what has been an otherwise disappointing season.

Keselowski came out on top of a fierce battle with Kasey Kahne over the closing laps, grabbing the lead for the final time with nine laps to go and leading the rest of the way for his 10th-career NASCAR Sprint Cup victory and his first since last September at Dover.

Keselowski, who missed out on making the field for the Chase for the Sprint Cup and a chance to defend his title, rallied from an early pit road miscue and benefitted from yet another ambiguous late-race debris caution to pick up the victory, which came at the expense of Johnson, who saw what was looking like a certain victory slip through his fingers.

“Without that yellow we probably wouldn’t have had an opportunity to win the race, but last year without the yellow that came out, we probably would have won the race. It’s funny how that works," said Keselowski. “I was thinking of that as I was pulling into victory lane about how we had a dominant car here last fall in 2012 and the yellows just played against us and we didn’t get an opportunity to really capitalize on it.

“This year, we had an excellent car as well and we caught a little bit of a break with the yellow, so it’s funny how those things come around sometimes. Either way, we got a win and that’s what I’m gonna think about."

Starting 23rd in the 43-car field, Keselowski wasn’t a factor for much of the race, running mid-pack for much of the first half. After coming to pit road during a caution on lap 87, Keselowski left pit road with the jack still wedged under his Ford Fusion, sending him to the rear of the field for the restart.

Despite the setback, Keselowski and his team shook off the penalty and climbed into the top 10 in the final 100 laps, running fifth when the fourth and final caution waved for debris on lap 308.

Up until that point, the race had been dominated by Johnson and Kahne, who led a combined 251 laps before the yellow flag, wiping out a nearly four-second lead for Johnson.

On the ensuing final round of pit stops, Kahne and Jeff Gordon managed to beat everyone off pit road with two-tire stops putting the Hendrick Motorsport teammates on the front row for the restart.

Back under green with 23 laps to go, Kahne and Gordon took off in a side-by-side battle for the lead while Johnson washed up the racetrack and faded all the way to seventh. Kahne stayed locked alongside Gordon until finally pulling ahead as the field came through turn four

Keselowski, who restarted sixth after electing to take on four tires, moved up to challenge Kenseth for second, running two wide before Keselowski powered past with 17 laps to go and started to reel in Kahne.

Running the high side, Keselowski pulled up on Kahne with 12 laps to go and waged a four-lap duel that ended when he managed to duck under Kahne in turns one and two to take the lead, holding on through one more lap as Kahne tried to get underneath in a final unsuccessful bid to re-take the lead.

“It was just a never-give-up night. We had a lot of struggles tonight," said Keselowski. “We didn’t qualify well, but we kept working our way forward. I knew we had a good car. I’m not sure we were as good as the 48 or the 5. I never got to really race them until the end and they had two tires, so I think we were probably pretty even.

“When Paul (Wolfe, crew chief) made the call to take four tires and I saw we were that close to the front, I knew we could get them."

The late-race caution flag had a ripple effect on the Chase standings, as Johnson went from possibly wining the event and taking over the points lead to finishing the night having lost a point in the standings to Kenseth, who now leads Johnson by four points with four races remaining in the Chase.

“Obviously, there was a caution that shook things up," said Johnson. “(On the restart) I was too close to (Kahne) and in his way, and my car washed up a little bit. A couple of guys were able to get inside of me and I just lost track position at that point, which was unfortunate. Once I got rolling again I was fine, but I lost too much at that point."

While the result was a disappointment for Johnson, it was a vindication for Keselowski and the entire Penske Racing organization, who in additional to missing out on the Chase were also penalized earlier in April for rules violations, then fell under further scrutiny after questionable tactics used by the team last month at Richmond aimed at guaranteeing a spot in the Chase for Penske driver Joey Logano.

“In a competitive environment like racing is there’s always gonna be people that root against you no matter what you’re doing," said Keselowski. “In the moment, that’s not really all that much fun, but when you get back home and you think about it in a grander scheme and big picture I guess you would say, you realize what that means.