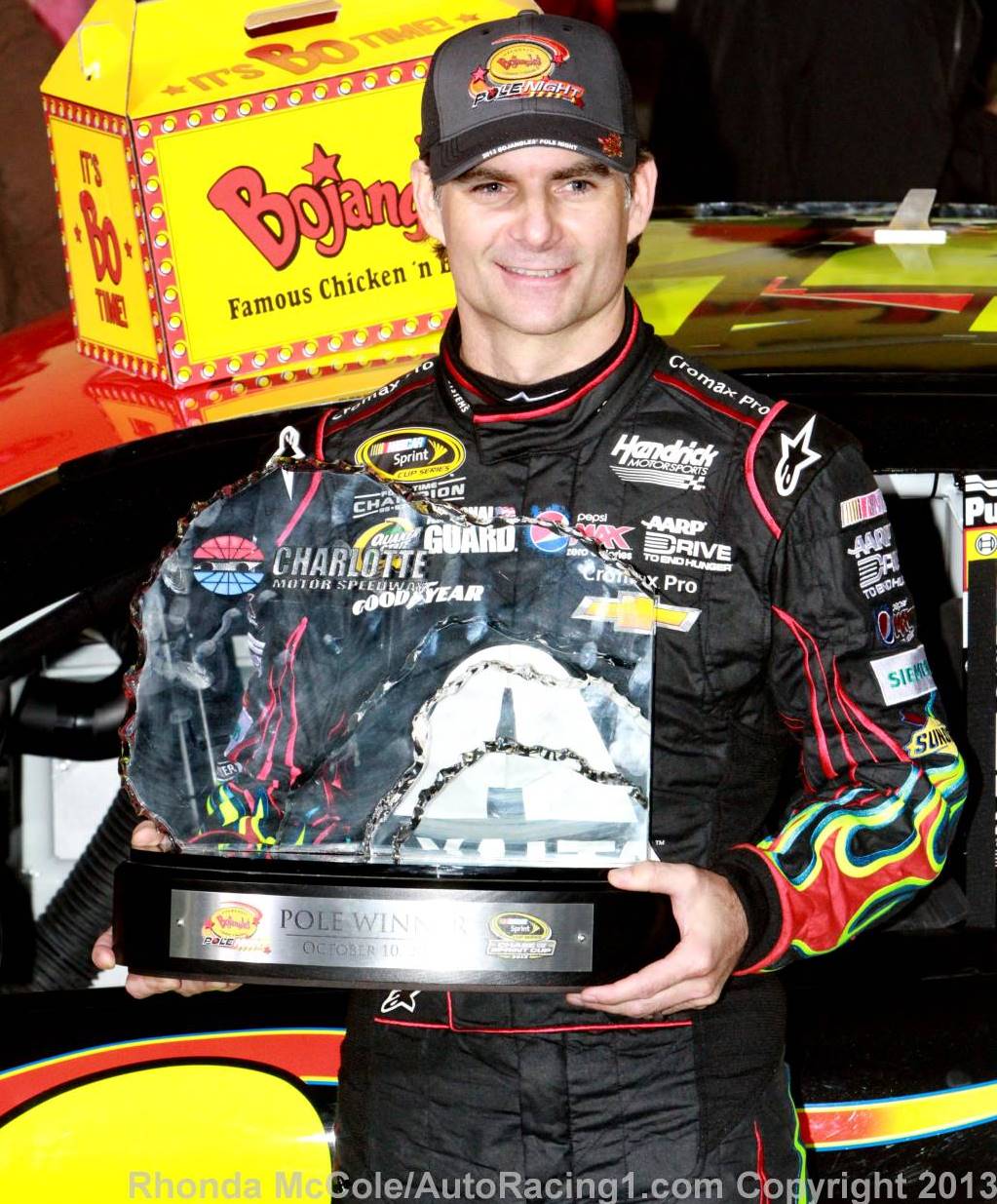 Jeff Gordon scored his 74th-career pole position in Thursday night’s qualifying session for Saturday night’s Bank of America 500 at Charlotte Motor Speedway, as the NASCAR Sprint Cup Series reaches the halfway mark in the fifth race in the 10-race Chase for the Sprint Cup.

Taking advantage of a late draw in the evening qualifying session, Gordon took to the track as the final qualifier and clocked in at 27.791 (194.308 mph) to lead a parade of drivers who powered to the top spot in the closing stages – with six of the final eight qualifiers trading the top two positions separated by less than a tenth of a second.

Gordon, who scored his first career Sprint Cup series race here in May of 1994, notched his ninth Charlotte pole to tie Ryan Newman for the most at Charlotte among active drivers.

“Man, that was awesome. It’s been a while since we’ve had a pole here at Charlotte as well as doing it in that fashion," said Gordon, who is currently fourth in the Chase standings. “The way that the draw was today, there’s a lot of fast cars going late in qualifying. But when you didn’t see the lap times picking up as much as we thought they were going to, I didn’t know if that late draw was going to really be a big factor. But I saw that the guys ahead of me were putting down good laps and I knew the grip was there and what the car did in practice. The car just did everything I wanted it to do."

Kahne took the initial pole as the second driver to take to the track and held the top spot with a 27.879 as 36 drivers took their turn and none could eclipse Kahne’s lap, with Ryan Newman and Dale Earnhardt, Jr. just missing the top spot.

Harvick took the track next and bumped Biffle, turning in a lap of 27.806 to top the field, but before Harvick could even take his helmet off Gordon flashed across the line with his second pole of the season, leaving last weekend’s race winner shaking his head.

“I felt like I didn’t get everything in (Turns) 3 and 4," said Harvick. “I knew from the way things were going and the way practice was that I needed to try to get everything that I could in (Turns) 1 and 2 and not get tight coming off of Turn 4 and I probably lost the pole right there. We would really have liked to have the pole tonight."

Earnhardt, Jr., Newman, Juan Pablo Montoya, Kyle Busch and Kurt Busch rounded out the top ten. Points leader Matt Kenseth, who came out as the first qualifier of the night, will start 20th.

With only 43 cars entered for Saturday night’s race, everyone made the show including Brian Scott (19th), Kyle Larson (21st) and Blake Koch (43rd), all of whom will be making their Sprint Cup debuts.