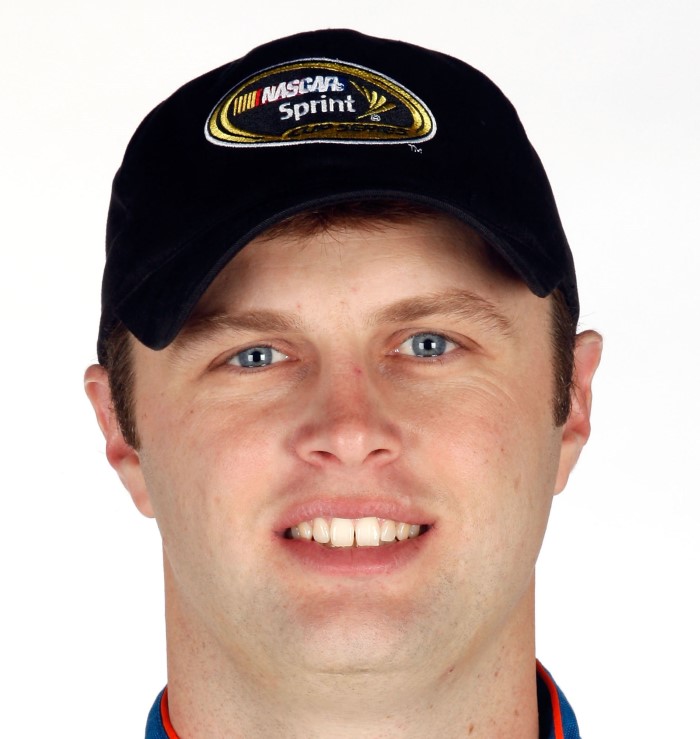 Police in Mooresville, NC say a NASCAR driver has been arrested and charged with assault after getting into a dispute with his wife. According to the Mooresville Police Department, officers were called to the home of Travis Wade Kvapil, 37, on Tuesday evening, October 8th, after getting a 911 call. Officers say Kvapil, who is currently the driver of the #93 Burger King / Dr. Pepper Toyota in the Sprint Cup Series, and his wife had been involved in a domestic dispute.

Kvapil was arrested and charged with assault on a female and false imprisonment. Kvapil was taken to Iredell County Jail and held under a domestic hold awaiting an appearance in District Court.

Kvapil drives for BK Racing, with teammate #83-David Reutimann. BK Racing posted a photo of Kvapil and Reutimann's race cars on Twitter around 1:00pm/et on Wednesday showing both cars with ribbons supporting Breast Cancer Awareness and Domestic Violence Awareness. That photo was pulled from Twitter after news of Kvapil's arrest broke.

In still more sad news regarding a member of the NASCAR Nation: John Smeltzer, a crew member in the NASCAR Nationwide Series, has been indefinitely suspended from NASCAR for violating the sanctioning body's Substance Abuse Policy. On Oct. 4, Smeltzer was found to have violated Sections 12-1 (actions detrimental to stock car racing) and 19 (violation of the NASCAR Substance Abuse Policy) of the 2013 NASCAR Rule Book.(NASCAR), Smeltzer was an engine tuner working for Hendrick Motorsports. Two days after NASCAR's announcement, Hendrick Motorsports issued a press release saying they respect NASCAR's strict policies regarding substance abuse and Smeltzer has been terminated as an employee of the company.

DESPITE THE STATE OF LIMBO, THERE MAY BE SOME GOOD NEWS FOR MICHAEL WALTRIP RACING

If you had to choose one word to describe the future of Michael Waltrip Racing's, (MWR), #56 team, limbo would be a very good option. This team is still reeling from the penalties handed down to them by NASCAR who determined MWR manipulated the finish of the September 7th race at the Richmond International Raceway. In the days that followed the massive penalties, the team's long time primary sponsor, NAPA Auto Parts, announced they would not be returning next year.

During NASCAR's Kansas Speedway weekend Rob Kauffman, MWR's majority owner, told "Fox Sports" that he hopes to be able to announce the implementation of an MWR reorganization plan in the very near future. Kauffman was extremely guarded about the pertinent details of the plan, but did indicate that there are some good options available to the company.

Kauffman maintains a full time residence in London-England and flew to the Charlotte-North Carolina area following the Richmond Raceway incident. In recent weeks he said he plans to remain in Charlotte until the MWR crisis is over.

Also in a state of limbo is Martin Truex Jr, the driver of MWR's #56 NAPA Toyota. During the Kansas Speedway weekend Truex said he still had no idea exactly what his plans are for the 2014 season. Truex also said he was keeping his options open while NAPA decides its future direction in NASCAR racing. In recent weeks MWR said they would not stand in the driver's way if he could land a Cup ride with another team despite the fact there are two years remaining on his contract. There has also been Cup garage rumors that claims NAPA might consider following Truex to another team as his sponsor.

In recent days it was revealed that Chad Johnston, the crew chief for the #56 MWR team, has asked for his release from the team effective at the end of this season. In a conversation held with Fox Sports, at the Kansas Speedway, Johnston said the decision was based on the fact that his race team is in a state of limbo regarding its future and his request for a release was based on the future support of his family. He felt like he needed to become aware of future options and it needed to be done right away. He also said he hopes everything works out at MWR and remaining with Truex and the team was his top preference.

Affectionately known as the Mayor of the Garage, NASCAR Sprint Cup veteran Jeff Burton appears to be "almost" ready to announce his future plans. Burton is nearing a deal that will keep him in the NASCAR Sprint Cup Series next season. Burton is splitting after this year with Richard Childress Racing. Ryan Newman is taking over the team's #31 Chevy beginning next season.

In some comments made to "NASCAR (Dot) Com during a break in testing at Martinsville Speedway, Burton said he's close to a deal that will keep him at the Sprint Cup level next season — though he declined to specify exactly where. "I actually have a lot of clarity, I just can't talk about it just yet," he said. "I can almost talk about it, but I just can't. I don't know when I'll be able to — it's going to be a couple of weeks. A lot of stuff happened toward the end of last week and into (Monday). So yeah, it's getting real clear to me what's going to be going on. But I'm just not at the liberty to discuss it right now." Burton did confirm the ride would be at the Sprint Cup level.

ESPN's live telecast of the NASCAR Sprint Cup Series race at Kansas Speedway on Sunday, Oct. 6, earned a 2.6 U.S. household rating, averaging 4,162,371 viewers, according to Nielsen Media. The rating and viewership for the fourth race of the Chase for the NASCAR Sprint Cup were up from last year's race, which earned a 2.5 rating and averaged 3,896,638 viewers. It was the highest-rated and most-viewed race so far in this year's Chase. The three Chase races this season that have been run and telecast as scheduled have seen ratings and viewership increases over last year.

There is, of course, a major reason why the Kansas Cup race scored a ratings increase. By race time Sunday afternoon every NASCAR fan in the world was aware of what happened between drivers Kyle Busch and Brad Keselowski the night before during the Nationwide Series race. The late race incident saw Busch hit Keselowski sending him hard into the retaining wall. What followed was a post race war of words that had Keselowski declaring that his professional relationship with Busch was now in a state of war. Every NASCAR fan was watching the Cup race on Sunday to see if Keselowski was going to retaliate which never happened.

In more television news, NASCAR officially closed the door on rumors, earlier this summer, that said ESPN had offered to sell the final year of their contract, 2014, to broadcast NASCAR Sprint Cup races to NBC and Fox Sports. NASCAR's official position was clarified via an official statement released October 5th by Steve Herbst, NASCAR Vice President of Broadcasting and Production:

"Despite speculation over the last month that NASCAR's new television agreement could be pushed up to the start of the 2014 season, NASCAR has informed our broadcast partners today that FOX, Turner and ESPN will finish the current term as originally planned. While we were humbled by the desire of NBC and FOX to start 12 months early, we now consider this matter closed and look forward to finishing our current agreement in 2014 with our great partners at FOX, Turner and ESPN."