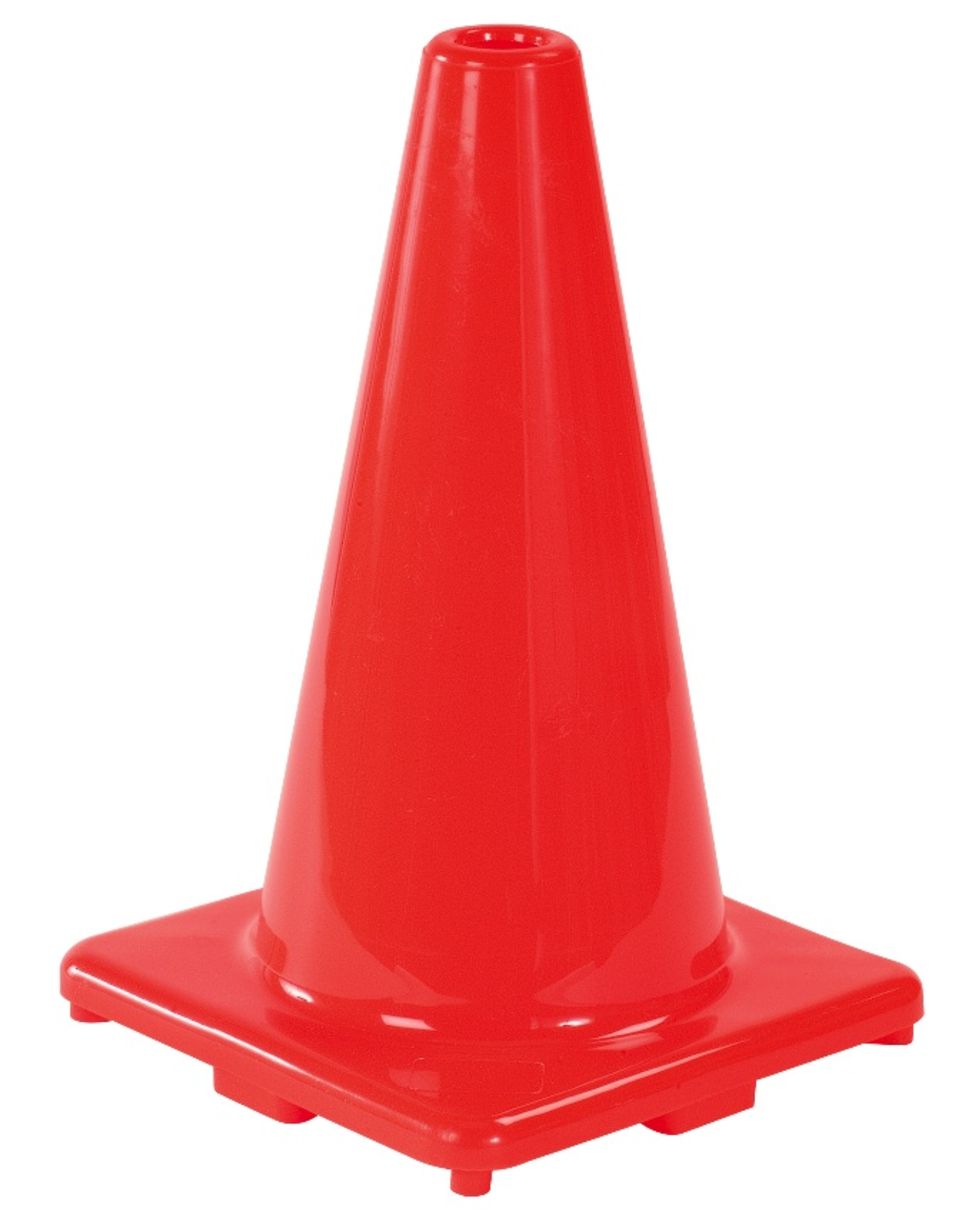 Having never been to Wisconsin's La Crosse Fairgrounds Speedway before, it was no surprise when I qualified near the back of the field last weekend after only six laps of practice (throttle stuck… don't ask). But my pit guys are amazing. They still gave me a fantastic car for the race.

But several of the area's short tracks have this weird thing that they do… maybe it's done other places as well and I just haven't heard of it yet. When the field is under caution, they place an orange cone at the start/finish line. This is universally known as the “Commitment Cone." When you pass The Cone, you must either drive to the inside (thereby choosing the inside lane) or the outside (thereby choosing the outside lane) for the upcoming double-file restart.

This is racing's equivalent to marriage because once you drive past The Cone, your decision is made and cannot be reversed. No one is really sure why.

It is alleged that this ritual allows drivers to choose either a starting position further toward the front of the field or their preferred lane. But this is deceiving. By the time most of the competitors pass the start/finish line, the leaders are already on the back straightaway. You can't see them and have no idea which lane to choose.

So you're really not choosing anything. You're just guessing.

I find the whole routine utterly bizarre. I always thought that – for instance – the tenth place car on a double-file restart automatically went to the outside of row five. Silly me.

So I'm halfway into a 40-lap feature event last weekend when the caution flag flies. The Commitment Cone is placed on the track and I don't know what to do. Being a rookie at this sort of thing, I gamble on the inside lane.

Still under caution, I mash the gas and catch up to the rest of the field on the backstretch only to find that I now share the inside groove with a dozen of my best friends, all of whom got there before me. Meanwhile, ten more guys fly past me and fill up the outside lane, all of them well ahead of me. I can't figure out what's going on. After passing people all night and not losing a single position, I somehow find myself dead last.

The green flag comes out and I suffer from deja vu. I press my radio button.

“Yeah, roger that," my spotter says.

“Well why am I passing him again?"

“He took the outside lane on that last yellow."

A dozen green laps go by before another caution flag flies. Okay. This time I've got it figured out. At the Commitment Cone I take the outside lane. Ha. They'll never catch me now. I rejoin the field on the backstretch only to realize that everyone else chose the outside lane as well. I still haven't been passed by a single car under green all night – not one – and now I'm at the back of the field again.

It occurs to me that this is not auto racing. This is musical chairs. The trick is to have your spotter guess the right lane at the right time. When the music stops, you don't want to be the guy without a chair.

With a good spotter and a little luck, it is apparently quite possible to finish halfway up in the running order and never pass a car in anger.

I can't help but wonder how this would work in the NFL. Have a coin toss before each quarter. The winner gets a free touchdown. Patriots 28, Packers 21. Tom Brady completes only 3 passes in 51 attempts but earns a game ball after nailing four coin tosses.

Maybe I'm just whining because I could never guess correctly. Then again, maybe there's a good reason why no other sport on earth would try such a thing.

Brats, cheese curds and stock cars… homemade root beer, snowmobiling and football… there are a lot of great things from Wisconsin, but the Commitment Cone is not one of them.