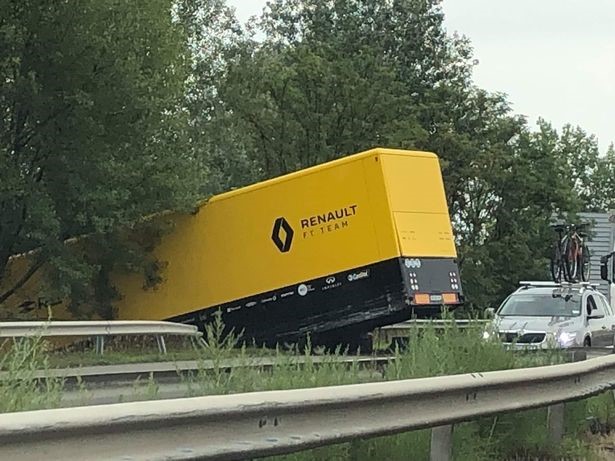 UPDATE Renault has confirmed that the truck that crash on the way to the Hungarian Grand Prix earlier this week has not affected the team's preparations for the upcoming weekend.

The truck crash near the city of Gyor, with Renault confirming that the driver of the truck was conscious and not in a serious condition.

The most recent update coming from Renault states that the driver has been discharged from hospital, and the goods that were traveling in the truck are not damaged.

“The driver of the Renault F1 team truck involved in a road traffic accident in Hungary on Monday continues to make good progress and has returned home," a statement read.

“The goods being transported were not damaged and the team’s preparations for the Hungarian Grand Prix this weekend have not been affected. We look forward to getting the weekend underway."

Renault will be hoping for better fortunes at this weekend's race, following on from its double retirement at Hockenheim last Sunday.

07/29/19 After a disastrous German GP that saw the French Renault team self destruct at Hockenheim, things could not get worse, right?

A Renault Formula One truck was left hanging from the side of the motorway after crashing en route to Hungary for this weekend's Grand Prix.

Local media reports claimed that the transporter, which had departed Germany following Sunday's dramatic race at Hockenheim, crashed into a ditch while traveling to Budapest.

It remains unclear at the moment if this lorry was transporting the team's RS19 cars – which are driven by Daniel Ricciardo and Nico Hulkenberg this season – or whether there has been any damage.

Pictures emerged on social media that showed the vehicle hanging on its side.

Firefighters and a rescue helicopter were called to the scene with a man believed to be trapped in the cabin of the truck.

The driver, who was driving within the respected regulations, is conscious and has not suffered serious injury. He’s been transported to hospital for further checks. No other vehicles were involved."

It comes after a disappointing display for the team at the German Grand Prix in which Ricciardo and Hulkenberg were both forced to retire from the race.

Indeed, it was a bleak day for Renault who are now three points behind Toro Rosso and down to sixth overall in the constructors' standings.

Ricciardo was the first of the two to retire, with an exhaust issue on lap 14 while running in 12th. Hulkenberg ran as high as second but his hopes of a first podium disappeared soon enough and he crashed out on lap 39. And team boss Cyril Abiteboul, who will be hoping his squad can bounce back at this weekend's Hungarian showdown, was honest in his assessment of the race.

“It was an emotional rollercoaster with highs and lows," he said. "Unfortunately, we’re finishing on a low with two retirements.

"It’s difficult to take as it was an exciting race and we’d have liked to have been part of it until the end. We missed an opportunity for big points over our direct competitors, but there are certainly positives from the weekend.

"We want to taste being higher on merit more regularly. It doesn’t deter from our focus of pushing on and building a more competitive car."