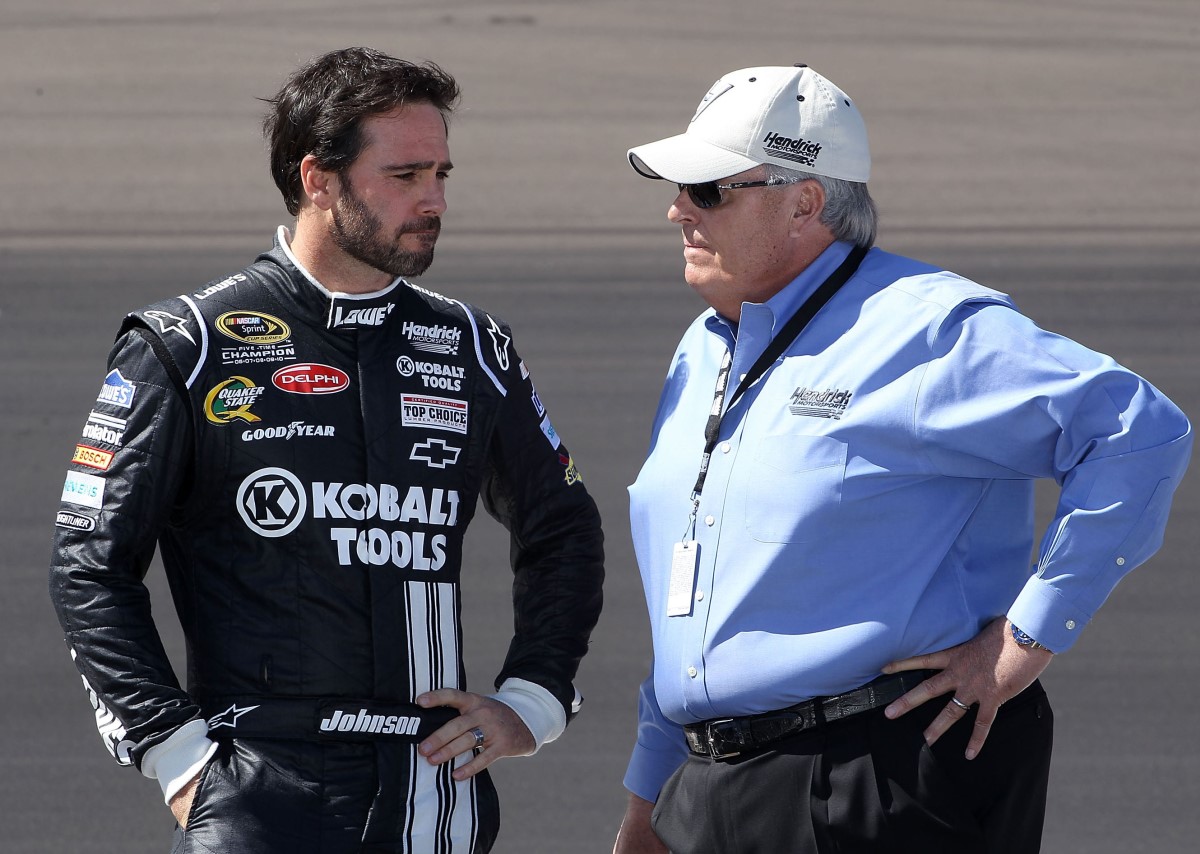 Points leader Jimmie Johnson has won pole position for the Advocare 500 at Phoenix International Raceway in his No. 48 Chevy over the Toyota of Denny Hamlin and the Ford of Joey Logano.

Kyle Busch and Jeff Gordon rounded out the top-5.

Johnson won his third pole of the season with a speed of 139.222 mph. He was also the fastest in the lone Sprint Cup Series practice before qualifying on Friday.

Johnson's speed set a new track record and marked the 19th time this season that the Generation-6 car has set a new standard. This is also Johnson’s second career pole at Phoenix, a track where he has won four times, with three of those wins coming in Chase for the NASCAR Sprint Cup races.

Denny Hamlin continued his late-season surge and will join Johnson on the front after posting a speed of 139.023 mph.

The rest of the top 10 is mostly filled with Chase drivers. Joey Logano, Kyle Busch, Jeff Gordon, Clint Bowyer, Kasey Kahne, Kurt Busch and Kevin Harvick will start third through ninth, with Martin Truex Jr. in the 10th spot on the grid.

Matt Kenseth, who is seven points behind Johnson in the Chase, will start 14th.

ANOTHER NEW TRACK RECORD AND DOMINATING PERFORMANCE BY YOU AND YOUR TEAM SO TALK A LITTLE BIT ABOUT YOUR RUN HERE AT PHOENIX:
“New track records are awesome. I don’t qualify on pole all that often so I take great pride in them; especially track records. It’s a very cool of a deal. It’s clearly at a great time in the season with the Chase and all that. We have a great pit pick and track position to start the race with. Now we just need to be able to maintain that and make the right decisions during the race to keep track position."

DO YOU REALLY HAVE THE ABILITY TO TURN IT UP AT THIS POINT IN THE SEASON? DOES SUCH A THING REALLY EXIST?
“I don’t feel like I’m doing anything different, but we have been able to, at least the year’s we’ve won championships, have been able to do more than we have during the regular season. It’s hard when you are inside of it, inside the car, inside the team to know what the difference is because we are doing the same stuff. But when I look around and I see what other champions do to win in the competitors, the battle between the two or three guys whoever it is they always seem to find a way to find a little more. So somehow we are doing it, yes, I recognize that, but it’s not a concerted effort. It’s not something that we are doing any differently. It’s just I think what you have to do to win championships. We are trying to rise up to the pace of the No. 20 and beat him."

DENNY HAMLIN JUST BASICALLY ADMITTED THAT AN OFF DAY FOR YOU WOULD BE A FIFTH PLACE FINISH. DO YOU EVER REFLECT ON KIND OF THE STANDARD YOU HAVE SET AND WHAT THAT MAY DO TO YOUR COMPETITION EACH WEEKEND?
“Man, I had like five races of 28th in a row before the Chase started I guess everybody forgot about that huh? (laughs) It happens to everybody. You have bad days, but I feel like the majority of the tracks we race on are good for us. There are a few in the summer months that beat us up from time to time and we went through that earlier this year. Then racing luck can get you from time to time too. In Pocono we blew a right-front (tire) leading, Atlanta we got smashed on a restart and on and on. If you are going to win a championship you have got to run in the top-five week in and week out. Fortunately we have been able to do so really for these eight races. Last year we made it eight races there and didn’t finish out that way. So we need to make sure we finish out these final two with strong finishes."

WHILE LAST YEAR AND THIS YEAR YOU WILL START THE NEXT TO LAST RACE WITH A SEVEN POINT LEAD YOU WILL START SUNDAY’S RACE 23 POSITIONS BETTER THAN YOU DID LAST YEAR. WHAT DOES THAT MEAN IN THIS RACE AND AT THIS TRACK?
“I’m not sure it means a ton. Matt (Kenseth) if you look at the history of Matt, qualifying hasn’t been his best, but he is always there when the checkered falls. That is what I have to expect out of he and his team once again. I’m sure they will be there when the checkered falls on Sunday. So we need to be buttoned up tomorrow, get our adjustments right, get the car right and then have a flawless race on Sunday."

WHAT DO YOU SEE AS THE KEY FACTORS IN DETERMINING THE OUTCOME OF THE RACE? GOING TO BE A LOT OF TWO TIRE STOPS? SOMEBODY MENTIONED CARL (EDWARDS) WENT THE WHOLE WAY ON LEFT-SIDES LAST TIME. DO YOU THINK THAT WILL BE POSSIBLE?
“Yeah, I think tire strategy first of all and then a close second is really fuel at the end. We have seen this turn into a fuel mileage race at the end of a few shows. I think we won one and that is how we got closed the gap on Denny (Hamlin) one year as well. I would say between those two parts. You obviously need a good car and good (pit) stops and all that, but tire strategy and then fuel is going to be the key points."

DID THE DRAW MAKE A DIFFERENCE TODAY?
“It didn’t hurt. I will take it. I was a little… probably like everybody else curious why things didn’t get faster sooner. I don’t know TV almost had me believing there was a transition period that the track was going through, but I don’t have a clue. But it didn’t hurt going out late for sure."

HOW MUCH OF YOUR PRACTICE TODAY WAS TOWARDS QUALIFYING AND HOW MUCH TOWARDS THE RACE AND HOW CRITICAL WILL YOUR PRACTICE BE TOMORROW MORNING?
“Tomorrow morning, I guess I have to think it through about track temp and stuff, but I would assume the second practice is closer to what we are going to race on. So the first practice we will make sure we are in the ballpark and things are going in the right direction. But today we spent half, 60 percent on race trim and then switched over midway point and made a couple of qualifying runs. Some tracks we go to we will start in qualifying trim and just focus on it solely, but here we felt like it would be nice to get some race trim in. Have something to sleep on overnight to start tomorrow’s practice with."

AS COMMITTED AND FOCUSES AS CHAD (KNAUS, CREW CHIEF) IS AND WHAT HE DOES HOW MUCH OF THAT HAS RUBBED OFF ON YOU AND EFFECTED THE WAY YOU APPROACH WHAT YOU DO?
“It definitely has. He has shaped me and molded me into the teammate, the team leader, the driver that I am. There are times when I do not want to hear what he has to say to me. Sometimes it ends up being right. In Homestead at our test there were a couple of examples of that which took place. The good thing with Chad is his intensity is there all that is an obvious, but he doesn’t have a filter. He is not fearful of getting something off his chest. At times it can rub anyone in here the wrong way, it can rub the competitors the wrong way and it can rub me the wrong way, but at least it’s out there. It’s nice working with a guy that isn’t afraid to get it off his chest. Because then you have a chance to work on it and you have a chance to address it. So from techniques and driving the car, what I do during the week and my involvement with the shop, with the pit crew guys, over-the-wall guys or approach to the race track, even lines I drive on the track. I know some crew chiefs get a kick out of listening to him because he will try to drive the car during the pit box during the race at times, but he only does it because he cares and that he is that focused on it all. His intensity has shaped me into who I am today and very grateful to have that environment. I think I thrive in that environment. There are some drivers that want to crew chief from the seat. That is not our dynamic. He has created an environment for me to thrive in and to learn. So it’s worked out really well. I guess I’m good at being told what to do (laughs)."