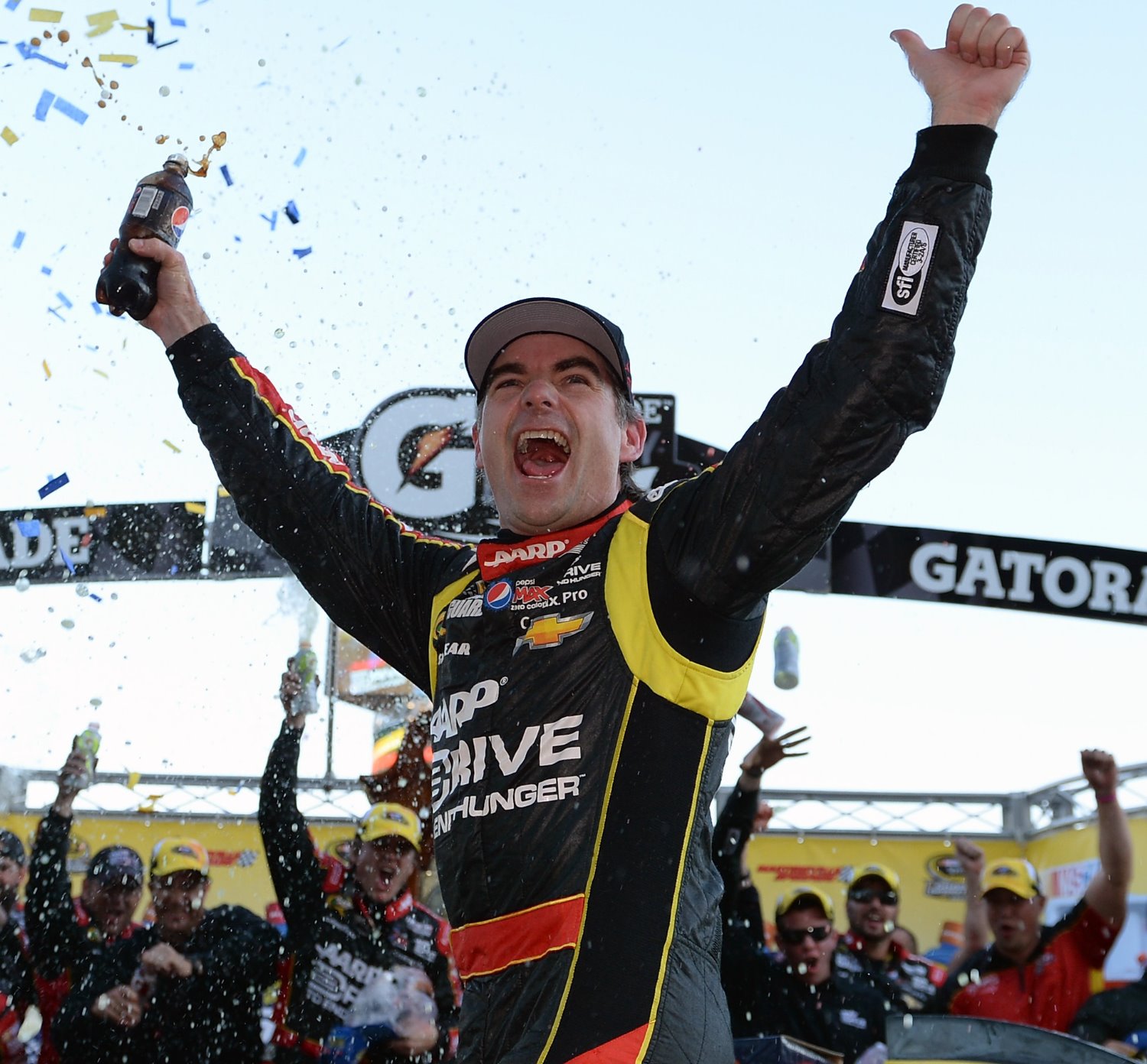 Jeff Gordon proved to everyone that he rightly deserves his spot in the Chase for the Sprint Cup and that he’s not out of the Championship fight just yet, as the four-time Sprint Cup champion put on a dominating performance to score his first victory of the season in Sunday’s Goody's Headache Relief Shot 500 at Martinsville Speedway.

Gordon passed Matt Kenseth with 21 laps to go and easily pulled away to collect his 88th-career victory and his eighth at Martinsville – tying his Hendrick Motorsports teammate Jimmie Johnson for the most among active drivers.

Kenseth crossed the finish line a career-best second just ahead of Clint Bowyer. Brad Keselowski was fourth followed by Jimmie Johnson, who ended the day tied in points with Kenseth.

Gordon led a total of 78 of the 500 laps while ending a 32-race winless drought and moving himself from fifth to third in the title standings with three races remaining in the 10-race championship battle. The victory also clinched the manufacturer’s championship for Chevrolet for the 11th straight season.

“It’s hard to top what it feels like to win, especially when you’ve been through all of what this team has been through," said Gordon, who collected yet another traditional Martinsville grandfather clock trophy. “I’m just so proud of them for never giving up. We’ve shown it all year long. We’ve been through a lot, but boy, this is making it all worth it.

“I’m just so happy for this team. That clock, there’s nothing better than getting a clock at Martinsville!"

Gordon’s car was one of the strongest in the field on the tricky paperclip-shaped half-mile oval, running in the top 10 most of the day.

Throughout the race, all eyes were on the two leading championship contenders Johnson and Kenseth, who traded the lead back and forth several times in the first half of the race.

On lap 417, the 17th and final yellow flag of the day brought the field to pit road for what would be the last round of pit stops, with Kenseth coming out first to retain the top spot, followed by Keselowski and Gordon.

On the restart, Gordon worked past Keselowski on the inside and began to reign in Kenseth, finally cutting to the inside in turn one on lap 480 to grab the lead for the final time.

Kenseth hung in there and stayed within sight of Gordon, but soon had Bowyer on his back bumper, allowing Gordon to pull away.

At the checkered flag, Gordon beat out Kenseth by three car lengths while Kenseth barely held off Bowyer to finish second.

“Jeff's (Gordon) experience here got me," said Kenseth. “I'm just not that experienced running up front here and I had something that was working but I was kind of hurting the rear tires and I hurt the front tires too. Just went away from me there at the end.

“I have nothing to complain about, just you always feel bad when you're leading at the end and your crew puts you out front and you can't hold on to win. So, I'm disappointed about that."

Johnson, who came into Sunday’s race with a four-point lead over Kenseth, fell back into a tie for the top spot while Gordon is 27 points back in third.

“It’s been a great battle with Kenseth, and Gordon is really showing that he wants to be a part of this deal, as well, so it’s going to be a dogfight to the end," said Johnson. “That’s the way that I would want to go racing for a championship, and I know that’s exactly what the fans want to see. We’ll keep digging hard."

While Gordon’s victory keeps him mathematically in contention for the title, scoring a win in the Chase was also a vindication for Gordon and his team, following his controversial entry into the field of drivers eligible for the championship.

After initially missing the cut for the Chase field, NASCAR made an unprecedented move by adding a 13th position to the Chase and awarding it to Gordon, after allegations came to light that Michael Waltrip Racing and Penske Racing had manipulated the outcome of the final regular-season race at Richmond in order to increase their teams chances of making into the Chase.

Following the Richmond race, Gordon wound up missing the Chase by a single point over Penske driver Joey Logano, while Ryan Newman was bumped from the field by MWR’s Martin Truex, Jr. After an investigation, NASCAR reinstated Newman to the field of 12 drivers and dumped Truex, and later added Gordon as well, calling the actions of MWR and Penske an “unfair disadvantage" to Gordon and his team.

The ruling was met with criticism and ridicule among the fans and the media, who felt NASCAR was making a mockery of the entire Chase by allowing Gordon to have a playoff spot he hadn’t earned.

Gordon’s victory on Sunday went a long way to prove he truly belongs in the Chase.

“I feel like we deserve to be in it," said Gordon. “I don't like how we got in it, being an added 13th team. You can dispute that all you want. But we're certainly not going to say no, we won't take it. We wanted to be in it. We feel like we were in a position to earn our way into it, and I think that this team would have performed like this whether we were in it or not.

“To me that decision just meant that what we're going to be racing for is a championship instead of for ourselves and pride and to kind of show the critics."