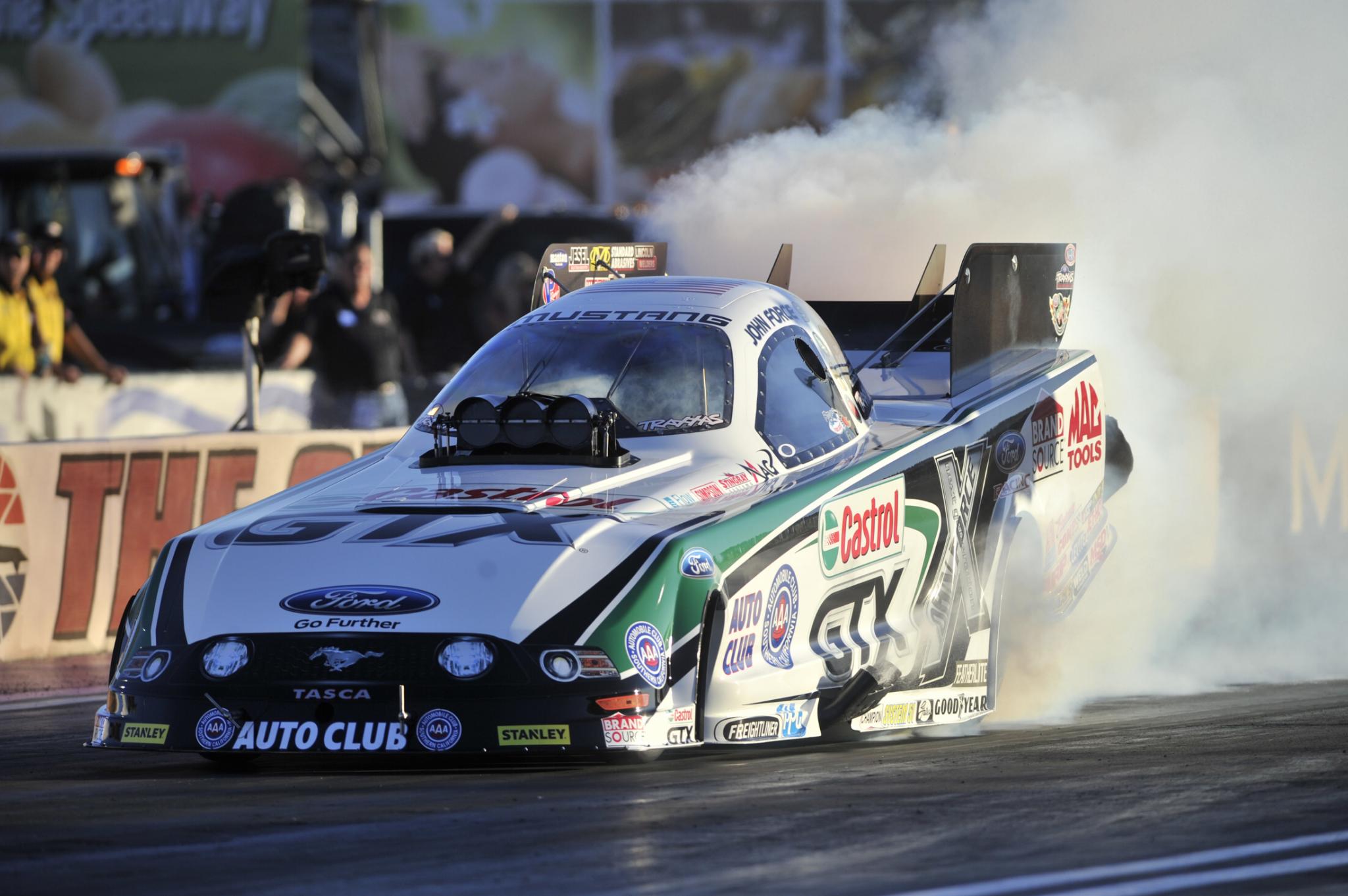 Points leader John Force qualified in the No. 1 position and continued his late-season surge with a track record performance in Funny Car on Saturday during the NHRA Toyota Nationals at The Strip at Las Vegas Motor Speedway.

Shawn Langdon (Top Fuel), Mike Edwards (Pro Stock) and Hector Arana (Pro Stock Motorcycle) also will lead their categories into Sunday's 11 a.m. eliminations as No. 1 qualifiers at the 23rd race of the season and the fifth of six playoff races in the NHRA Mello Yello Countdown to the Championship.

The 15-time world champion, who has won back-to-back races, went to the No. 1 position on his final qualifying pass with a track record time of 4.011 seconds at 317.79 mph in his Castrol GTX Ford Mustang.

Force, who will race veteran driver and former teammate Gary Densham in the first round of eliminations, earned his fifth No. 1 qualifier of the season and 145th in his career, and continues to look impressive during the Countdown.

“This car has had a little magic these last few races and just seemed to get away with everything," Force said. “We went up there and went right down the race track. It was like a rocket ship. It was pretty awesome. I’ve got a great team and we’re just going to have some fun (Sunday)."

Force’s daughter, Courtney Force, qualified second with a run of 4.052 at 318.24 in her Traxxas Mustang. Defending world champion Jack Beckman is third with a 4.052 at 315.56 in his Valvoline/MTS Dodge Charger, while Matt Hagan, who is second in points, will start from the fifth position.

Points leader Langdon paced the Top Fuel category with a 3.778 at 324.28 in his Al-Anabi Racing dragster to earn his seventh No. 1 qualifier this season and 13th of his career. Langdon, who has six wins in 2013, will face off with Terry McMillen to kick off eliminations.

“We’ve started out very well with qualifying," Langdon said. “During the two weeks off the whole Al-Anabi team was really trying to focus on just a couple areas of the car, trying to find a couple thousandths of a second.

“You really try to treat this like any other race, but there’s a lot of pressure in the last two races of the season. You just can’t have any mistakes with just two races left. We’ll try to keep making good runs and maybe we’ll have some race-day luck here in Vegas."

Steve Torrence and his Capco Contractors dragster jumped to the second position after an impressive run of 3.783 at a track-record speed of 327.35 in the final qualifying session. That bumped Tony Schumacher to the third position after his U.S. Army dragster couldn’t improve on the 3.784 at 324.59 from Friday. Doug Kalitta, who is second in points, will start eliminations from the seventh position after going 3.809 at 322.96 in his Mac Tools dragster.

In Pro Stock, Edwards earned his class-best 14th top qualifying position of the season and 55th of his career with a run of 6.632 at 208.23 on Saturday in his Interstate Batteries/I Am Second Chevy Camaro. Edwards, who is second in points and has a category-leading six wins this season, will meet Kurt Johnson in the first round of eliminations. He is also going after his first win in the Countdown.

“We took advantage of the conditions and made an extremely good run," Edwards said. “We got a few little qualifying points and those are critical. Now we have to worry about (Sunday). Whoever does the best job over the next two races is going to be champion. We just have to win here. We need to win here, but there is no pressure. I feel good about our team and our chances, and I just need to do my deal."

V. Gaines will start eliminations from the second spot after powering his Kendall Oil Dodge Avenger to a run of 6.641 at 206.20. Points leader Jeg Coughlin qualified third after going 6.645 at 207.43 in his JEGS.com/Mopar Dodge Avenger.

Arana raced to his fourth No. 1 qualifier of the season and third in the last four races in Pro Stock Motorcycle, covering the distance in 6.930 at 192.44 on his Lucas Oil Products Buell in the final qualifying session. Arana, who is seeking his first win since 2009, has 25 No. 1 qualifiers in his career and will face Shawn Gann in the opening round.

“That was an awesome run," Arana said. “We just had two weeks off and we wanted to use that time to concentrate on our bikes and get ready for the last two races. We have to stay calm and not take anything for granted. I have to stay focused and keep doing the same thing (Sunday)."

Steve Johnson qualified second with a 6.945 at 191.92 on his Suzuki, squeaking past rookie Adam Arana and his 6.946 at 192.71. Points leader Matt Smith will start eliminations from the No. 4 position for the second straight race after his Viper Motorcycle Company Racing Buell went 6.957 at 193.02 on Saturday.