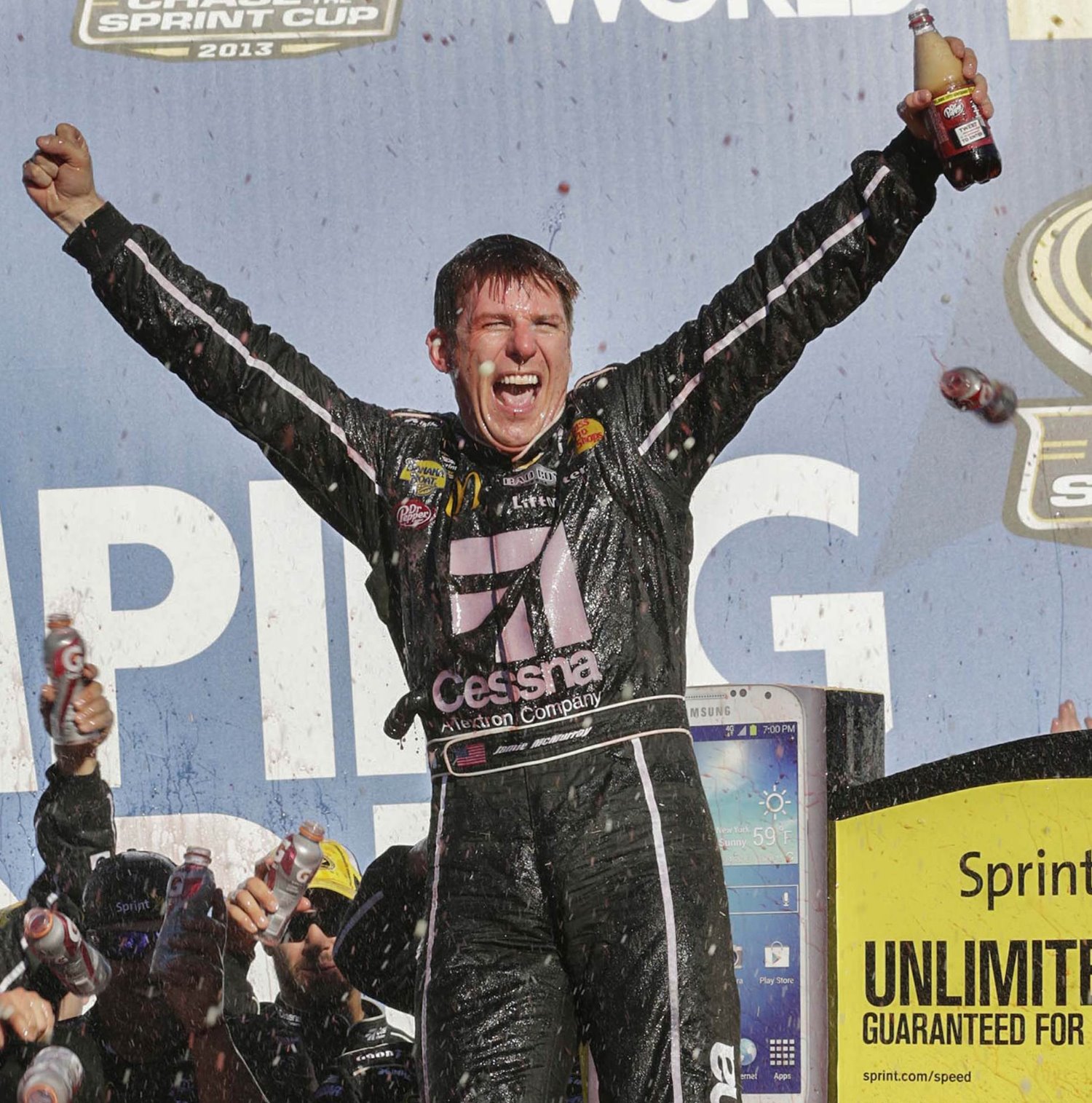 The race finished under caution with Dale Earnhardt Jr. denied the chance to slingshot past on the last lap. Ricky Stenhouse Jr. was third.

Paul Menard and Kyle Busch rounded out the top-5.

McMurray led 16 of the 188 laps to score his first victory of the season, seventh of his NASCAR Sprint Cup Series career and second on the 2.66-mile track. He also prevailed at Talladega in the fall of 2009.

The race was halted about a half-lap from the finish by a caution period when Austin Dillon, subbing for Tony Stewart in the No. 14 Chevy, spun out of the second turn down the backstretch. He slid back into traffic and the No. 13 Ford of Casey Mears slammed into the rear of Dillon's car, sending it airborne.

The race left the contest between championship front-runners Matt Kenseth and Jimmie Johnson atop the Chase for the NASCAR Sprint Cup standings reversed with four races left in the season. Kenseth entered Talladega with a four-point edge. He left with a four-point deficit to Johnson, who led the most laps (47), finished 13th to Kenseth's 20th and took over the top spot in a bid for his sixth Sprint Cup crown.

Aside from some brief time that Kenseth spent playing it safe in the rear of the field during the middle and later stages, the two title contenders were found in sight of each other near the front of the pack for most of the day.

Busch, who entered the race as a fringe championship contender after a subpar weekend at Kansas Speedway two weeks ago, missed his pit stall during the first round of green-flag pit stops on Lap 40. He lost a lap in the exchange, but regained it as the free-pass driver on the next caution flag on Lap 79, when Marcos Ambrose spun and collected Juan Pablo Montoya in the tri-oval.

The race was fairly tame — by Talladega standards — until the final green-flag pit stops with 25 laps remaining. That’s when the drivers got busy, dicing and jockeying for position and swapping the lead three-wide.

The first 77 laps were fairly uneventful, with Kenseth, Johnson and Earnhardt Jr. swapping the lead while Chase contender Kevin Harvick hung around the back.

The first wreck occurred on Lap 78 when Marcos Ambrose lost control of his car while running in the outside lane, spun across the track and slammed into the car of Juan Pablo Montoya. Surprisingly, they were the only two drivers involved in the crash.

The incident allowed Kyle Busch to get back onto the lead lap. He had fallen a lap down when he got blocked on pit road and missed his pit stall, forcing him to pit twice.

Danica Patrick was in contention to win, running in the top 10 much of the race, until she was nabbed for speeding on her final pit stop. Patrick hit pit road too hot and then swerved on pit road, prompting Matt Kenseth to call her a “derelict."