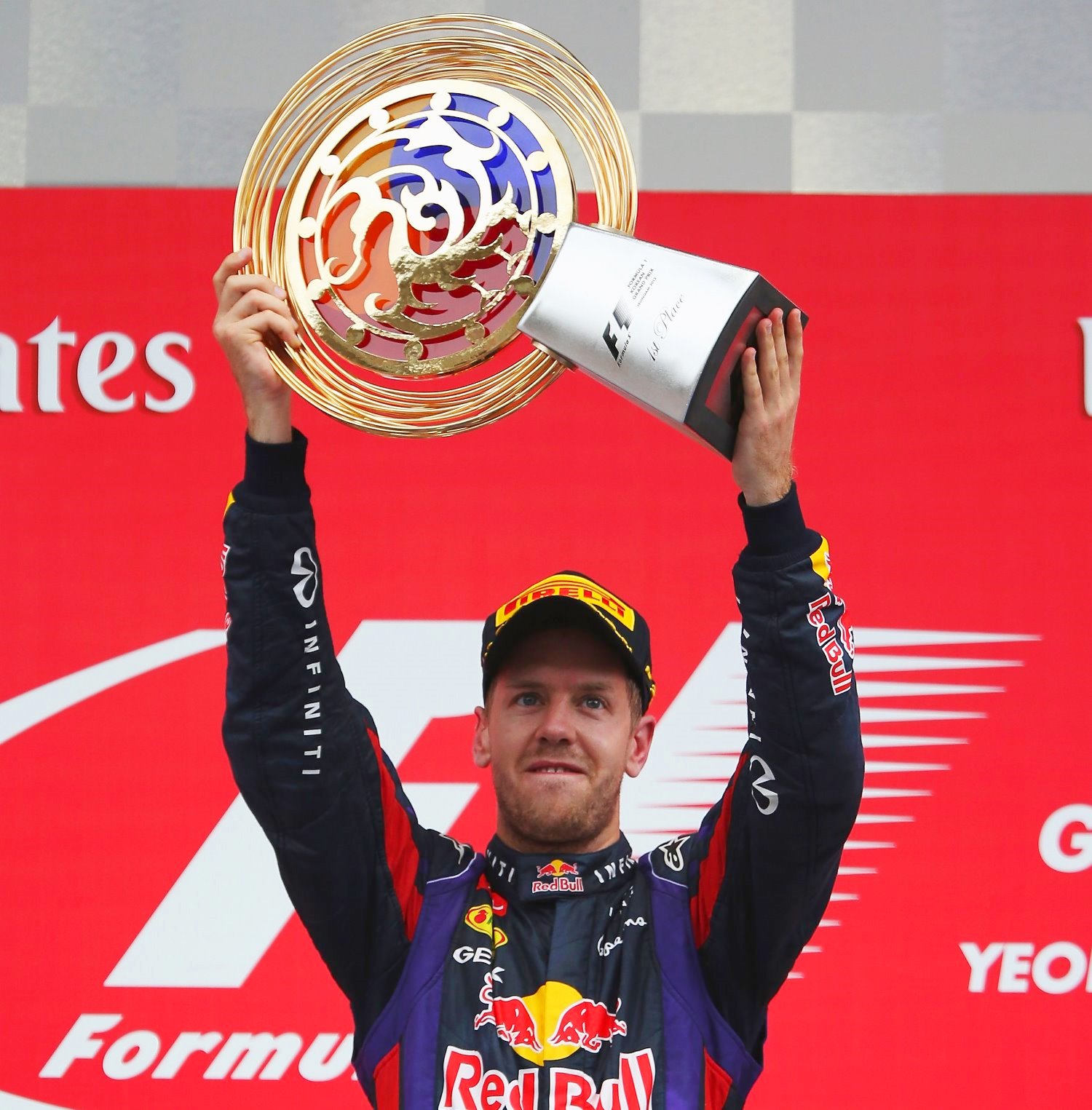 Kimi Raikkonen drove from 10th on the grid to finish second and his Lotus teammate, Romain Grosjean, was third.

Vettel stormed away from pole and never looked back. Vettel is so good he pulls away in the first few laps out of DRS range and no one can ever catch him after that. It's as if he is taking candy from a baby.

Second place starter Lewis Hamilton was out driven right from the start, and his ego deflated, was then passed by Romain Grosjean before suffering extreme tire wear in his second stint and fell back from Grosjean towards his teammate Nico Rosberg – only for the German's front wing to partially fail in a shower of sparks as he overtook his struggling teammate.

Vettel stayed ahead of the Lotus pair on a mid-race restart to retrieve Jenson Button tire remains, with Raikkonen passing Grosjean with a spectacular Turn 1 move a lap later.

Another safety car followed when Adrian Sutil spun into Turn 3 on the restart lap and clouted Webber, causing the Red Bull to catch fire in the run-off area.

After that restart the race ran green to the finish, with Vettel edging away from Raikkonen and Grosjean to win.

“It was a long race today, but it’s really great to win. The start was crucial, it’s always tricky here as you’re nervous about the long straight when you start from pole," said Vettel.

"Fortunately we had good traction off the line and I had a strong exit out of the first corner. We kept the lead and tried to control the race from there. I think Mercedes had more range than us today, but we were able to win which is great. It was a very strong performance from the whole team and I’m happy. We’re just focusing on continuing to take one step at a time and trying to get the best out of the car at every single race."

Grosjean believes the appearance of the Safety Car was pivotal in him losing second position, with Lotus team-mate Kimi Raikkonen getting close enough to make a move after pitting at the same time.

Although Raikkonen is confident that he would have been able to achieve the same result under normal circumstances, Grosjean reckons the situation played into the Finn's hands, with the decisive pass coming in between the two caution periods.

"It was good to be very close to the Red Bull," began Grosjean, "but unfortunately for me and luckily for Kimi the Safety Car came and we had to pit at the same time. We wanted to get a little bit of an advantage, but I made a small mistake which is my fault. Then Kimi passed me and there were yellow flags, so I couldn't use the DRS."

Grosjean was satisfied with his overall race performance at the Yeongam circuit, however, the Frenchman returning to the rostrum for the first time since the German Grand Prix: "I tried to push hard at the end and it's good to be back on the podium."

Fernando Alonso said his pre-race feeling was "unfortunately confirmed" during Sunday's Korean Grand Prix, having predicted that his Ferrari team would struggle.

The Spaniard, who started from the third row, appeared to struggle with severe tire graining on Pirelli's Medium compound tire and ultimately had to settle for sixth position, just behind Mercedes rivals Lewis Hamilton and Sauber's Nico Hulkenberg.

"We are not competitive," said Alonso, whose run of three second place finishes ends. "Normally we have good race pace but here we didn't have the performance we expected. The long runs on Friday were not as good as at other Grands Prix.

"We knew the race was going to be tough and unfortunately we confirmed this feeling. And all the race we were stuck behind [Nico] Hulkenberg which doesn't help the tires."

He added: "Hopefully in Suzuka we can come back and fight for the podium again."

Felipe Massa, who narrowly avoided ending Alonso's race after misjudging his approach to Turn 3 on the opening lap, finished ninth in the sister Ferrari.